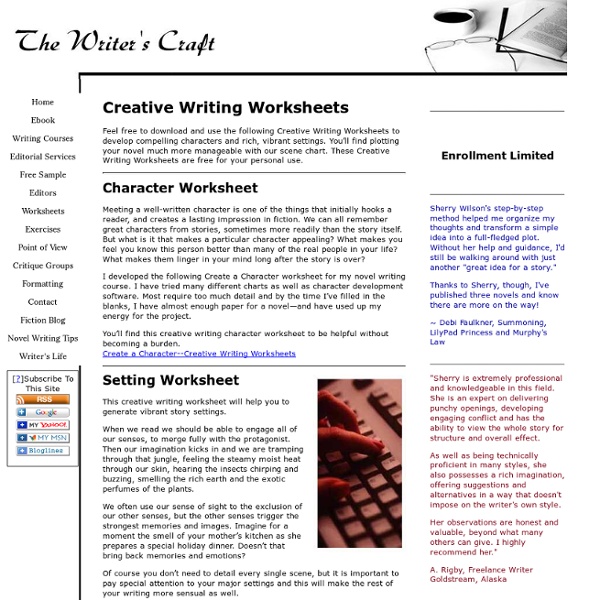 Feel free to download and use the following Creative Writing Worksheets to develop compelling characters and rich, vibrant settings. You’ll find plotting your novel much more manageable with our scene chart. These Creative Writing Worksheets are free for your personal use. Character Worksheet Meeting a well-written character is one of the things that initially hooks a reader, and creates a lasting impression in fiction. I developed the following Create a Character worksheet for my novel writing course. You’ll find this creative writing character worksheet to be helpful without becoming a burden. Setting Worksheet This creative writing worksheet will help you to generate vibrant story settings. When we read we should be able to engage all of our senses, to merge fully with the protagonist. We often use our sense of sight to the exclusion of our other senses, but the other senses trigger the strongest memories and images. Scene Chart Need a spreadsheet to plot your novel? Related:  Writing Plot Structure

» Blog Archive » Plotting Your Novel – The Quick Outline Tool Nothing draws a line in the sand of novel writing like the question, “To outline or not to outline.” Is there any kind of middle ground? In fact, I think there is. When I started my first novel, I wrote into the void, with no outline to guide me. By the time I’d rewritten the 3rd draft with no more idea where the story was going than when I’d set out along the path years earlier, I decided I’d better channel my inner Virgo and see what outlining could do for me. So I learned everything I could about outlining. I made convoluted complex road maps. As my good friend and YA author Janice Hardy is fond of reminding me, “Plot is a verb, not a noun.” So let’s go plot your character’s journey… Okay, so if we think of plot as a verb, then what we are looking for isn’t some magical overlay that we place onto our story or our characters, but an organic progression of actions our characters “do” or “take” that become the plot. But what choices should they make? Let’s talk about Act I.

How to write a scene One of the thing I admire most about Jane Espenson’s blog is that she talks very directly about the words on the page, giving names to techniques I use but never really think about. The two-percenter, for example. So one of my goals for 2007 is to get a little more granular in my advice-giving, and talk less about Screenwriting and more about screenwriting — in particular, scene writing. Spend a few years as a screenwriter, and writing a scene becomes an almost unconscious process. It’s the same with writing a scene. So here’s my attempt to introspect and describe what I’m doing that I’m not even aware I’m doing. Many screenwriting books will tell you to focus on what the characters want. The question is not, “What could happen?” Imagine the projectionist screwed up and accidentally lopped off this scene. But it’s so dramatic! Tough. Scripts are often clogged with characters who have no business being there. Most of your scenes won’t have one of these out-of-nowhere aspects.

20 Essential Elements of a Bestselling Thriller, by Jodie Renner If you want your thriller or romantic suspense to be a compelling page-turner, make sure you’ve included most or all of these twenty elements: 1. A protagonist who’s both ordinary and heroic. Rather than having a “Superman” invincible-type hero, it’s more satisfying to the readers if you use a regular person who’s thrown into stressful, then increasingly harrowing situations, and must summon all of his courage, strength and inner resources to overcome the odds, save himself and other innocent people, and defeat evil. 2. The readers need to be able to warm up to your main character quickly, to start identifying with her; otherwise they won’t really care what happens to her.So no cold, selfish, arrogant characters for heroes or heroines! 3. Your antagonist needs to be as clever, strong, resourceful and determined as your protagonist, but also truly nasty, immoral and frightening. 4. 5. If it doesn’t, change your protagonist — or your story line. 6. 7. 8. 9. 10. 11. 12. 13. 14. 15. 16. 17.

The Fatal Flaw - The Most Essential Element for Bringing Characters to Life By Dara Marks Growth is the by-product of a cycle that occurs in nature; that which flowers and fruits will also eventually wither and go to seed. The seed, of course, contains the potential for renewal, but does not guarantee it, nor does the seed instantly spring to new life. These are the moments in the human drama where the stakes are the highest, where our choices matter the most: What's it going to be, life or death? This brings up the most essential demand for a well-dramatized script: In order to create a story that expresses the arc of transformation, a need for that transformation must be established. First, it's important to highlight the fundamental - organic - premise on which the fatal flaw is based: * Because change is essential for growth, it is a mandatory requirement for life. * If something isn't growing and developing, it can only be headed toward decay and death. * There is no condition of stasis in nature. Finding the Fatal Flaw Therefore, we can say that: 1.

How To Make Facial Hair Grow Faster & Thicker Thick, full facial hair has historically been a symbol of power, ruggedness and masculinity in some cultures. Growing a full beard or even just a mustache requires some patience and perseverance, since the rate your hair grows and how thick it comes in depends largely on genetics and levels of testosterone. Although nature dictates your hair growth, you can take some steps to help it along. Eat right and get plenty of rest. Supplement your healthful diet with vitamins and minerals shown to improve hair growth. Commit to growing your facial hair. Work with what you’ve got.

Old Plots, New Plots This turned out to be a long entry so Thriller Guy is going to break it up into two. He'll be putting the other half up in a few days. TG has spoken many times about the difficulties in coming up with great plot ideas. Oh, how many times have the Little Ones gathered at his knee and pleaded, (pled?) “Oh, TG, tell us your secret, how can we too come up with killer plot ideas?” TG reads a ton of books, and most of them are running through the same old plots, mash-ups and ripoffs. But instead of continuing to rail against the paucity of today's plots, TG is going to reprise an old plot and give you some new ones he likes over the last year's reading. Clive Cussler used to be the master of the over-the-top, bizarro plot. It's 1865 and the Confederate ship CSS Texas takes on a special prisoner and fights her way out through a Union blockade. OK, TG is too tired to go on. The point is, it's one hell of a plot.

Fantasy Name Generator By Samuel Stoddard - Version 1.5 One of the perks of creating fantasy stories -- whether by writing a story or game or by role-playing -- is you get to make up the names. Some people relish the task while others are frustrated by it. In addition, this tool can be fairly amusing to use even if you don't have any name creating to do. You can use the fantasy name generator below. Cool Mens Hairstyles Pictures, Hair Care, Facial Hair & Styling Tips