The Universal Shapes of Stories, According to Kurt Vonnegut 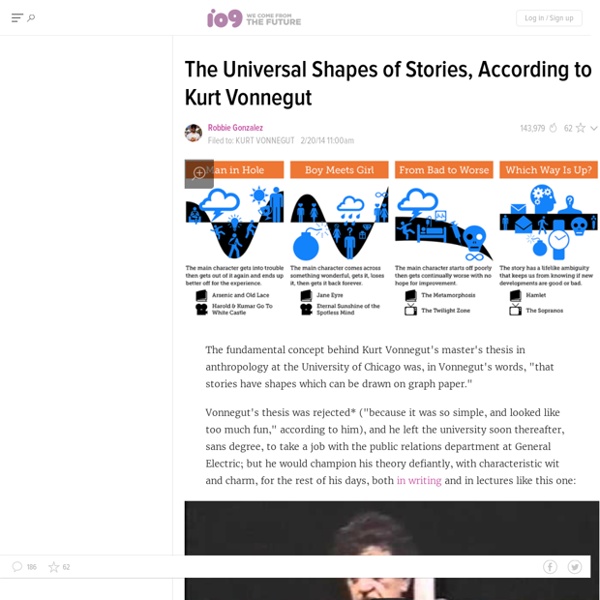 That's funny — I made a Rosencrantz & Guildenstern crack in another comment on this thread. First, I love the play/film, but I've only read the play, haven't had a chance to see it. But I'd be lying if I didn't admit I have a hard time not seeing it through the lens of Beckett. (I just spent too much time with Beckett and Joyce's work — it's shaded how I see most other literature, whether I like it or not.) But what I know of the backgrounds is that Tom Stoppard — at least in that work — was pretty influenced by Beckett in a few ways. Both deal with performances within the performance, and are interested in exploring and exploiting the cracks of the form. Both Beckett and Stoppard tried to inject some humor into existentialist and absurdist drama, and both did this through Vaudevillian pratfalls and language games. So in short, Rosencrantz and Guildenstern seem like Shakespearean versions of Vladimir and Estragon. So that's the first part of the circle, Shakespeare-to-Joyce. Whoa.

8 Classic storytelling techniques for engaging presentations A good public speaker takes their audience on a journey, leaving them feeling inspired and motivated. But structuring your speech to get your ideas across and keep your audience engaged all the way through is tricky. Try these eight storytelling techniques for a presentation that wows. You’re doing a presentation, so you start with the facts you want to get across. 7 Essential Elements of Scene + Scene Structure Exercise Today’s post is excerpted from The Plot Whisperer Workbook (Adams Media, 2012) by Martha Alderson. Two lucky commenters were chosen to receive a free copy of the book: Tanette Smith and Mindy Halleck. Congratulations!

Top 15 Great Alcoholic Writers - Listverse Books Many great writers of the 20th century (especially American writers) struggled with addictions to alcohol. Some believe that this may have contributed to their great artistic abilities, while others believe that the alcohol served as a medication for other problems in their lives. This is a list of the 15 greatest writers who were alcoholics. 15. Hunter Thompson Kurt Vonnegut Diagrams the Shape of All Stories in a Master’s Thesis Rejected by U. Chicago “What has been my prettiest contribution to the culture?” asked Kurt Vonnegut in his autobiography Palm Sunday. His answer? Writing Comedy Sketches That Sell by Brian LuffThe Internet Writing Journal, July 1999 Introduction The first thing to do before you sit down and try and write a sketch, is to watch and read as many other comedy sketches as you can. Go to the library, borrow books, videos, tapes, records, lock yourself away and watch sketches until they come out of your ears. Study the masters of the art. Monty Python, Mel Brooks, The Fast Show, Saturday Night Live, French & Saunders, etc etc.

The 12 brand archetypes all successful businesses are built on Successful brands have a strong sense of identity, one that mirrors the hopes and aspirations of their customers. But finding your voice – especially as a small business – can be difficult. And expensive. Identifying your brand archetype from this list will save you time and money and connect you instantly to your audience.

Five Open Source Apps For Writers and Authors by Lisa Hoover - Jul. 17, 2009Comments (9) Even if you have the perfect idea for the next Great American Novel, getting it down on paper is never easy. While you could always use standard word processors like OpenOffice Write or AbiWord, they don't have the bells and whistles that make writing books, manuals, and theses as easy as possible.

The writing life: Why do novelists write novels about novelists? Ruling over a global empire brings with it many benefits, the chief perk being unlimited access to illicit sex. When Britannia dominated the waves, the English were famous for being prudes at home and lechers abroad. Men who were models of self-control in the mother country kept harems in the hinterland. Queen Victoria, Empress of India, reigned over a planet-encompassing booty call. Yet if lust was a motive for seeking domination, it could also be a solvent of oppression. In his eye-opening monograph The Rise of Gay Rights and the Fall of the British Empire (2013), the human rights scholar David A.

Kurt Vonnegut’s Cat’s Cradle to become a TV show According to the late celebrated author and satirist Kurt Vonnegut, Cat’s Cradle is tied with Slaughterhouse-Five as Kurt Vonnegut’s best book with a grade of “A-plus.” Given that the latter was treated to its own film version in 1972, its co-winner is long overdue for an adaptation. Better late that never, as they say: IM Global Television has optioned the rights to Cat’s Cradle, and the series will be executive produced by Sandi Love of Elkins Entertainment and Brad Yonover. Released in 1963, the original work is Vonnegut’s fourth novel.

Steve Martin Shows You How to Write a Sketch Show in His Rare TV Special The Paley Center for Media, which has locations in both New York and LA, dedicates itself to the preservation of television and radio history. Inside their vast archives of more than 120,000 television shows, commercials, and radio programs, there are thousands of important and funny programs waiting to be rediscovered by comedy nerds like you and me. Each week, this column will highlight a new gem waiting for you at the Paley Library to quietly laugh at. (Seriously, it’s a library, so keep it down.) This might be heresy to some of you, but I just can’t get into the early seasons of SNL.

8 ½ Character Archetypes You Should Be Writing Here’s the thing about character archetypes: everybody’s got his own take. Do you run with Joseph Campbell’s gazillion and one Jungian archetypes? How about Dramatica’s double quad of eight archetypes? Or maybe screenwriter Michael Hauge’s simple offering of four main players?

Related:  Writing
Related:  Writing   -  Structure   -  Start Writing 3   -  Vonnegut   -  the structure of man   -  Sentence Structure   -  P1 Some resources mostly concerned with atomic structure   -  Story Structure writing tips   -  Structure   -  Structure and How To   -  Taxes & Business Structure   -  Vonnegut   -  Five Open Source Apps For Writers and Authors   -  Karpman drama triangle - Wikipedia, the free encyclopedia   -  Gestalt psychology - Wikipedia, the free encyclopedia   -  MSNBC - How to Think About the Mind   -  Elements of a Story   -  How to Make Readers Feel Emotion | The Editor's Blog   -  Kurt Vonnegut on the Shapes of Stories - YouTube   -  A Simple Novel Outline – 9 questions for 25 chapters | H.E. Roulo   -  A quick overview of the Hero’s Journey | Jordan McCollum   -  Scene-Creation Workshop — Writing Scenes that Move Your Story Forward | Holly Lisle: Official Author Homepage   -  Create A Plot Outline In 8 Easy Steps   -  29 Plot Templates: Know the Readers Expectations Before you Bust Them   -  Three-act structure - Wikipedia, the free encyclopedia   -  Morality Quiz/Test your Morals, Values & Ethics - YourMorals.Org   -  Crime Fiction Collective: Set up Your Story in the First Paragraphs   -  Holacracy | Social Technology for Purposeful Organization   -  25 Ways To Plot, Plan and Prep Your Story   -  How to Write a Synopsis of Your Novel   -  6 Writing Outline Templates and 3 Reasons to Use Them — Self Publishing Team   -  8 simple formula plot templates | The Wise Sloth   -  The 4 Story Structures that Dominate Novels   -  How to Plot a Character Driven Book in 3 Easy Steps | Robyn DeHart   -  How to Write a Script Outline | The 8 Essential Plot Points   -  What is Plot - How to Write a Story from Beginning to End   -  How to Plot a Novel With Index Cards | eHow   -  How It Works | Holacracy   -  25 Unique Places to Find Story Ideas   -  Creative Writing Worksheets--The Writer's Craft   -  How to Organize and Develop Ideas for Your Novel