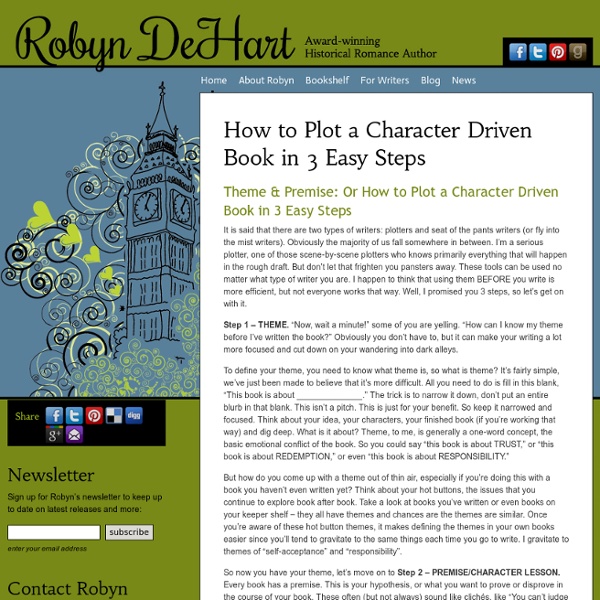 Theme & Premise: Or How to Plot a Character Driven Book in 3 Easy Steps It is said that there are two types of writers: plotters and seat of the pants writers (or fly into the mist writers). Obviously the majority of us fall somewhere in between. I’m a serious plotter, one of those scene-by-scene plotters who knows primarily everything that will happen in the rough draft. But don’t let that frighten you pansters away. These tools can be used no matter what type of writer you are. Step 1 – THEME. To define your theme, you need to know what theme is, so what is theme? But how do you come up with a theme out of thin air, especially if you’re doing this with a book you haven’t even written yet? So now you have your theme, let’s move on to Step 2 – PREMISE/CHARACTER LESSON. This is the biggie for me when I’m doing my prewriting. Character lesson or premise is just what it sounds like: what does your character need to learn? Which brings me right into Step 3 – CHARACTER ARC. That’s it. Related:  dianemarycowan2

How To Write Character Emotion: ANGER JOIN THE DISCUSSION AT "Anger is a killing thing: it kills the man who angers, for each rage leaves him less than he had been before--it takes something from him." ~Louis L'amour According to Webster's Dictionary, anger is: "a feeling of displeasure and hostility resulting from injury, mistreatment, opposition, etc." Synonyms include: animosity, annoyance, antagonism, exasperation, fury, hatred, indignation, ire, rage, and violence. Even with a brief look at quotes, definitions and synonyms, it's easy to see that anger has many sides. So how do we write anger to show these differences? The easy way out is to tell: "Jim was angry." The next easy way out is to express anger in tired cliches: mad as an old wet hen, mad as a hornet, etc. Even when using body language and facial expression, it's easy to fall back on tried and true phrases: yelling, slamming doors, pounding fists, lips drawn into a thin line (one of the big hangups in my own writing). 1. 2. 3. 4. 5.

List of superhuman features and abilities in fiction Origins Examples of ways in which a character has gained the ability to generate an effect. Methods Examples of methods by which a character generates an effect. Powers Superpower interaction This section refers to the ability to manipulate or otherwise interact with superpowers themselves, not "power" such as electrical power or gravitational power. Personal physical powers Powers which affect an individual's body. Mentality-based abilities The abilities of extra-sensory perception (ESP) and communication. Physical or mental domination Physics or reality manipulation These powers may be manifested by various methods, including: by some method of molecular control; by access to, or partially or fully shifting to another dimension; by manipulating the geometric dimensions of time or space; or by some other unnamed method. Elemental and environmental powers Ability to control or manipulate the elements of nature. Energy manipulation These powers deal with energy generation, conversion and manipulation.

Describing Emotions in Novels - novelwritingsite The definition of excellent story telling is transporting the reader into the minds of the characters within. If the reader feels no emotional empathy with the characters, the story will fall flat. Describing emotions effectively will bode well for the novel. But how can the writer convey emotional feelings with words? How to Describe Emotions An abstract noun is the labelling of a cerebral concept that is not solid and cannot be seen. Creative Story Writing with Emotion Words The word "love" has many connotations. Rather than take the easy route of using abstract nouns to describe an emotion, it would be a better idea to describe exactly what it feels like without using the label. "Jess sat in the small room feeling anxious and claustrophobic. Here, the reader has been spoon fed labels for the sensations but not what they felt like: claustrophobic, anxious, panic attack, frightened. Suspense Writing Creative Writing Tips on Avoiding Emotional Cliches Clichés must be avoided at all costs.

Creating Villains People Love to Hate by Lee Masterson Every story has to have a bad guy. There wouldn't be much conflict for your protagonist to overcome if there was no antagonist to stir the pot. Yours might be the evil villain who opposes everything your hero (or heroine) does. Whoever your villain is, making sure he is believable is far more difficult than simply creating a character who does bad things to hold up your protagonist's progress. You job here is to make your villains credible, logical, and believable, but not likeable. But it's more involved than just explaining their adverse actions. Basically, you need your villains to be real, three-dimensional people. Unfortunately most "bad guys" are shown as being shallow, narrow-minded creatures whose only ambition is to be as evil as possible. You lose any emotional impact your story had if your readers can not completely believe the threat to your hero is real, or threatening enough. Your villain is no different. How Not to Create a Villain, by Anne Marble

Advice on Novel Writing < Back to darkwaves.com Foreword by the Author Developing Efficient Work Habits Elements Of A Successful Story In the opening... In the body of the story... In the conclusion... Afterword by the Author Foreword by the Author A little later tonight (Thursday, Nov 5 [1992]), I'm going to start sending in a series of items about writing fiction for the mass market. Altogether I'll be sending 17 separate “handouts” from my commercial fiction course. The files total about 180K--enough for a short book. Why am I doing this? Crawford Kilian Communications Department Capilano College 2055 Purcell Way North Vancouver, BC Canada V7G 1H7 Usenet: Crawford_Kilian@mindlink.bc.ca Developing Efficient Work Habits Different writers face different advantages and drawbacks in forming good writing habits. Writing habits flourish best in routine, but the efficient writer also exploits opportunity. Keep your writing equipment (paper, pens, software manuals, etc.) in your writing place, close at hand.

Creative Writing For Dummies Cheat Sheet Rewriting and editing helps to tighten up your work. But it can be difficult – what to chop and when to stop may not be clear, and you may change your mind more than once during the process. Ask yourself whether you need to take out: Unnecessary information and explanation. You may need to add or expand: Something you know but have forgotten to tell the reader; perhaps the age of the main character. You may need to move: Dramatic sections to make a stronger opening. In your final edit: Check for grammar, punctuation and spelling mistakes. How To Write a Death Scene | Writerly Life People often visit Creative Writing Corner searching for answers about how to write a death scene, so it’s about time that I gave my thoughts about it. I was first given the assignment to write a death scene as a stand-alone piece when I was a freshman in college, in my very first creative writing class. I chose to write a creative non-fiction piece about a relative of mine. The piece ended up being fairly successful; it was published in my college newspaper and I received a lot of very kind comments about it. Here are a few things I learned from that writing experience: For someone witnessing the death of a beloved person, the scene is not just about the way the person is going. After the jump: more things to do in a death scene. It’s very easy to get cheesy in a death scene, instantly robbing your story of its tenderness and emotion. What made people respond to my written piece and call it poignant weren’t the heavy-handed bits or the sweeping generalizations, but the details.

25 Things You Should Know About Character - StumbleUpon Previous iterations of the “25 Things” series: 25 Things Every Writer Should Know 25 Things You Should Know About Storytelling And now… Here you’ll find the many things I believe — at this moment! 1. Without character, you have nothing. 2. A great character can be the line between narrative life and story death. 3. Don’t believe that all those other aspects are separate from the character. 4. The audience will do anything to spend time with a great character. 5. It is critical to know what a character wants from the start. 6. It doesn’t matter if we “like” your character, or in the parlance of junior high whether we even “like-like” your character. 7. It is critical to smack the audience in the crotchal region with an undeniable reason to give a fuck. 8. You must prove this thesis: “This character is worth the audience’s time.” 9. Don’t let the character be a dingleberry stuck to the ass of a toad as he floats downriver on a bumpy log. 10. 11. 12. 13. The law of threes. 15. 16. 17. 18.