Writing Fiction: How to Structure a Killer Novel Ending 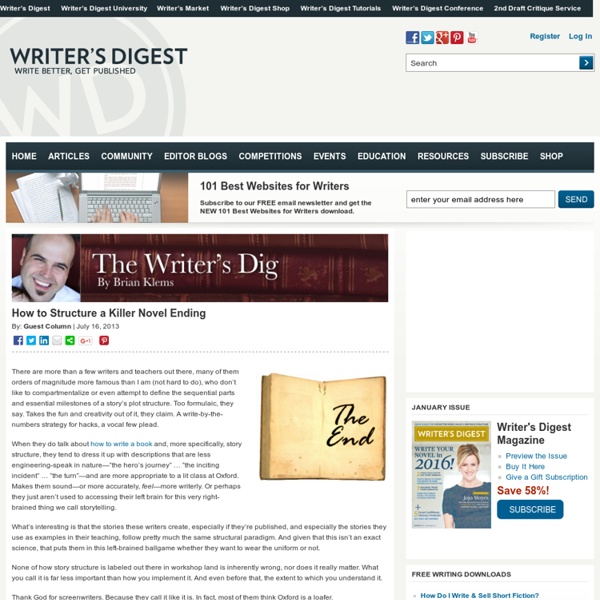 There are more than a few writers and teachers out there, many of them orders of magnitude more famous than I am (not hard to do), who don’t like to compartmentalize or even attempt to define the sequential parts and essential milestones of a story’s plot structure. Too formulaic, they say. Takes the fun and creativity out of it, they claim. A write-by-the-numbers strategy for hacks, a vocal few plead. When they do talk about how to write a book and, more specifically, story structure, they tend to dress it up with descriptions that are less engineering-speak in nature—“the hero’s journey” … “the inciting incident” … “the turn”—and are more appropriate to a lit class at Oxford. Makes them sound—or more accurately, feel—more writerly. What’s interesting is that the stories these writers create, especially if they’re published, and especially the stories they use as examples in their teaching, follow pretty much the same structural paradigm. Thank God for screenwriters. Related:  dianemarycowan2

David Morrell On the Key to Settings In his CraftFest session at ThrillerFest, “Setting: How to Make Your Novel Go Places,” David Morrell (author of First Blood) riffed on how to produce fantastic settings that become characters in their own right. Morrell pointed out that settings are seldom talked about, and often receive short shrift in comparison to other craft elements. But they shouldn’t. So what’s the key to crafting distinct, rich, truly alive settings in your work? “What we need to do is forget about sight, and concentrate on feeling,” Morrell said. Hemingway would describe a scene so you would feel it as if you were really there. Morrell cited novelist John Barth’s method of “triangulation”—you take the sense of sight for granted, and add two other senses from among the remaining four. When sight alone is used, Morrell said that’s what causes a piece of writing to seem “flat” or “one dimensional.” So you triangulate. But you can tackle it in revision. –Watch for balance and clarity of POV characters.

Online tools and apps that will help you revise your writing Hiring an editor is an important step in publishing a book-length manuscript. But for smaller projects — short stories, essays, academic assignments —it’s not always possible to get a professional editor to check your grammar and structure before submitting. But you can still bring your writing skills to perfection when you access the right tools. These tools can help you learn a thing or two about how you write and how you can improve your style, but they will also add some fun to the concept of writing: 1. I Write Like Are you wondering how much your work is influenced by a famous writer? You can enter any text in English to play around with this tool. 2. Have you ever paid attention to Ernest Hemingway’s style? When you see a sentence highlighted in yellow, you are advised to split it or shorten it to make it clearer. 3. Your writing should be just as you want your girlfriends/boyfriends to be – fit and lean. 4. So you think that 1000 words are enough to elaborate a topic? 5.

Best Creative Writing Exercises (PHOTOS) Writers block, oh, writers block ...please go away! Even though it's the bane of all writers' existence, there are a bevy of ways to bypass the darn thing. From writing prompts to writing exercises, there are thousands of ways to get the creative juices flowing. Here are just a few of our favorites. Loading Slideshow 7x7x7x7Grab the 7th book from your bookshelf. Best Creative Writing Exercises 1 of 10 Hide Thumbnails 25 Things You Should Know About Character Previous iterations of the “25 Things” series: 25 Things Every Writer Should Know 25 Things You Should Know About Storytelling And now… Here you’ll find the many things I believe — at this moment! — about characters: 1. Without character, you have nothing. 2. A great character can be the line between narrative life and story death. 3. Don’t believe that all those other aspects are separate from the character. 4. The audience will do anything to spend time with a great character. 5. It is critical to know what a character wants from the start. 6. It doesn’t matter if we “like” your character, or in the parlance of junior high whether we even “like-like” your character. 7. It is critical to smack the audience in the crotchal region with an undeniable reason to give a fuck. 8. You must prove this thesis: “This character is worth the audience’s time.” 9. Don’t let the character be a dingleberry stuck to the ass of a toad as he floats downriver on a bumpy log. 10. 11. 12. 13. The law of threes.

Writing communities and networking strategies in the Digital Age When you first started composing your masterpiece, you probably thought the biggest hurdle was actually getting it done. By now, you’ve learned there are many more challenges than just the writing process. You need to find an editor, a publisher, a peer review group. And, you need to engage in some serious marketing – of yourself and your book. With each new task you face, you probably feel there is no possible way to make it all happen. That’s why you are probably freaking out right now. Why do I need to worry about digital networking?! Trust me. There are five reasons why digital networking will enhance your writing and your career: You’ll meet people you wouldn’t normally connect with. Tips for networking online with traditional social media Now that I’ve convinced you it’s a good idea to add one more thing to your to-do list, you’ll want to know how to get started. First, start with traditional social media networks – Facebook, Twitter, Google+ and LinkedIn. Book in a week Writertopia

Creative Writing Prompts Write a scene that includes a character speaking a different language, speaking in a thick accent, or otherwise speaking in a way that is unintelligibe to the other characters. (Note: You don't necessarily need to know the language the character is speaking—be creative with it!) Describe a character's reaction to something without explaining what it is. See if your fellow prompt responders can guess what it is. Write a story or a scene about one character playing a prank on another. Writing Prompt: Write a story that involves confusion over homonyms (words that have the same spelling but different meanings) or homophones (words that sound the same but are spelled differently). For World Storytelling Day, share the best story you've ever heard or told by word of mouth, or have a fictional character recount their favorite story. You're making your way down a cobbled street when a stocky, red-bearded man beckons you into an alley. Consider your handwriting, or a character's handwriting.

Create A Plot Outline In 8 Easy Steps By Glen C. Strathy How would you like to create a plot outline for your novel in less than an hour that is emotionally compelling and dramatically sound? It's easier than you think. The secret is to incorporate the 8 Basic Plot Elements. Sound intriguing? I'll describe each of the eight elements in turn. On the other hand, if you already have a draft for a novel, that you're looking to revise, then ask yourself, as we go through these elements, whether you have included them in your story. 1. 15K+Save The first element to include in your plot outline is the Story Goal, which we covered in detail in the previous article, The Key to a Solid Plot: Choosing a Story Goal. For instance, let's say we want to write a story about a 38-year-old female executive who has always put off having a family for the sake of her career and now finds herself lonely and regretting her choices. There are many ways we could involve other characters in this goal. ... a mother who wants her to be happier. 2. 3.

Important Writing Lessons From First-Time Novelists KIRA PEIKOFF (kirapeikoff.com) is the author of the acclaimed thriller Living Proof (Tor Books). She holds a bachelor’s degree in journalism from New York University and is a candidate for a Master of Science in bioethics at Columbia. She has written for The Daily News, Newsday, The Orange County Register and New York magazine. For several years, she worked in the editorial departments of two major publishing houses; currently she teaches writing and is at work on her second novel. Here’s something most published pros know well: In this business, there are no absolutes. The journey to bookstores seems to be a lot like that old snowflake cliché—No two are alike. And no one illustrates this fact better than debut novelists. —by Zachary Petit, former senior managing editor of Writer’s Digest Consider Lissa Price, Melinda Leigh, Carter Wilson, Kira Peikoff and Eyre Price: One pursued publication for 30 years. They ran the gauntlet and emerged on the other side with a book in their hands. E. L.