Here's what Pangea looks like mapped with modern political borders 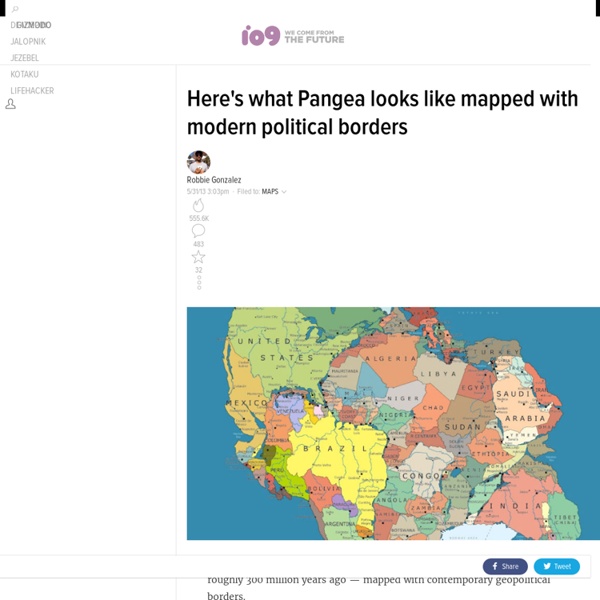 Related:  1 Structure of the Earth 1 FULL

transmedia storytelling - Technology Media Telecom | GeoActive Group Transmedia Storytelling in Action In the good old days – actually, not that long ago – market development for a new product or service launch was considered to be predictable. A skilled marketing communications or PR person would contact “the media” and pitch them the same story – over, and over again. That repetition resulted in a crescendo of editorial coverage -- as that limited list of qualified journalists recited the “messaging” to their assumed to be receptive audience. Why Cross-Media Methods Thrived Those schooled in legacy marketing or public relations practices offered a non-solution. The more enlightened digital marketing practitioner would use cross-media techniques to take the same basic narrative -- about the product or service attributes -- and repeat it across different media. How Digital Storytelling has Evolved Today, the savvy marketer is experimenting with a more advanced approach to digital storytelling and multimedia asset development.

Molten iron river discovered speeding beneath Russia and Canada Mick Roessler/Getty By Andy Coghlan Deep below our planet’s surface a molten jet of iron nearly as hot as the surface of the sun is picking up speed. This stream of liquid has been discovered for the first time by telltale magnetic field readings 3000 kilometres below North America and Russia taken from space. The vast jet stream some 420 kilometres wide has trebled in speed since 2000, and is now circulating westwards at between 40 and 45 kilometres per year deep under Siberia and heading towards beneath Europe (see diagram, below). Advertisement No one knows yet why the jet has got faster, but the team that discovered the accelerating jet thinks it is a natural phenomenon that dates back as much as a billion years, and can help us understand the formation of Earth’s magnetic fields that keeps us safe from solar winds. Straight to the core “It’s a remarkable discovery,” says Phil Livermore of the University of Leeds, UK, who led the team. Invisible river Rotating cylinders Flip the polarity

... just Laura: school projects "mom, i have a project due". to me, those are the 6 most dreaded words that can come out of my girls mouths. lol! seriously, i just dread school projects with every ounce of my being. i consider myself a pretty crafty person. i know stuff, about a lot of crafts. but school projects? they're a whole other set of "crafts". usually involving a shoebox or a posterboard, and a whole lot of creativity. the kind that i'm not good at. i started to realize just how many of these school projects we have done over the last 12 months. let's check them out, shall we? a diorama project for sarah on a wild animal. the leopard, to be exact. we had a shoebox, but i thought it was too big. so i went to target, and picked out a shoebox from some toddler shoes and asked if i could take it home for a project. smaller box, less space to fill. smart thinking, right? mission poster board project for sarah. i'm actually thankful for this project. since most 4th graders have to actually build a mission. lol!

Malvinas30 | Documental Interactivo ***Walter Pitman and the Smoking Gun of Plate Tectonics Fifty years ago, a graduate student named Walter Pitman made a discovery that would change the way we see our planet. It was late at night, and Pitman was reviewing charts of ship data that had just come off the computer at what was then Columbia University’s Lamont Geological Observatory. The ship, the Eltanin, had crossed a mid-ocean ridge – part of a 40,000-mile undersea volcanic mountain chain that encircles the Earth – while recording the magnetic alignment of the rocks in the seafloor below. Pitman suddenly saw symmetry in those recorded lines, with the mid-ocean ridge as the center point. “It was like being struck by lightning,” he said. That symmetry was the smoking gun that confirmed the theory of seafloor spreading and set the stage for our understanding today of plate tectonics. At the time, however, these were highly debated theories. Walter Pitman Half a century later, new research was setting the stage for a better understanding of the planet. “We had a gam,” Pitman said.

Create a Society Project: Middle School Project on Creating Your Own World Cultural Aspects of the Project We have ascertained how many people live on the island and which parts they inhabit. Students have already made some decisions about how rural or developed the civilization is. Now is the time to build upon this. Culture/Religion/Mythology/Folklore: Does the island society have a religion, mythology or folklore? Make sure all of your ideas are tied into one consistent set of beliefs. Art: What types of art do they have? Music: How do the island people make music? Dance: Extra credit: create an original island dance to go with the original island music. Latitude — The Future of Storytelling NASA Is Unprepared to Defend Earth From Comets - The Atlantic SAN FRANCISCO—In a beige room on Monday, in the center of a sprawling corporate conference center, lifelong government researchers described one relatively quick and sudden way that the world as we know it could come to an end. Luckily, they also had a plan to stop it. For most of human history, “comets were portents of impending catastrophe, not the catastrophe itself,” said Joseph Nuth, a career geochemist at NASA. In response to that paper, NASA realized that it was woefully unprepared to fend off a possible asteroid collision. But NASA—and Earth—remain utterly vulnerable to a comet collision. This means that while NASA might have years or decades to plan for a close-call with an asteroid, a comet could side-swipe Earth only 18 months after it was detected. So Nuth had a recommendation: The United States should build two comet-destroying spacecraft ahead of time. Both spacecraft would sit in storage until such a time as they were needed. How long would “enough” be?

5 Games to make Geography Exciting! - Blessed Beyond Crazy I LOVE geography! I know that makes me weird. But I was a history major in college so a love of geography probably comes along with that. Now I’m a homeschooling mom. I’ve noticed that my 5 year old also loves geography. I don’t even really have to teach him either. These games will work perfect in a homeschooling setting, but even if you do not homeschool you can still use these games to help your child review. It makes me sad that some people view geography as a “Necessary Evil” when it comes to teaching. I know that children learn best when the teacher enjoys teaching. This is a simple, but fun game. Arm your child with a loaded nerf gun. This one is good for learning and introducing new material. Cook a small pot of spaghetti noodles. Let’s pretend we are learning about the state of Nevada. You can trace the geography shape onto the paper before using the noodles if you want to make it a little bit easier. The noodles will not last so prepare your child beforehand. 1. 2. 3. 4. 5. 6.