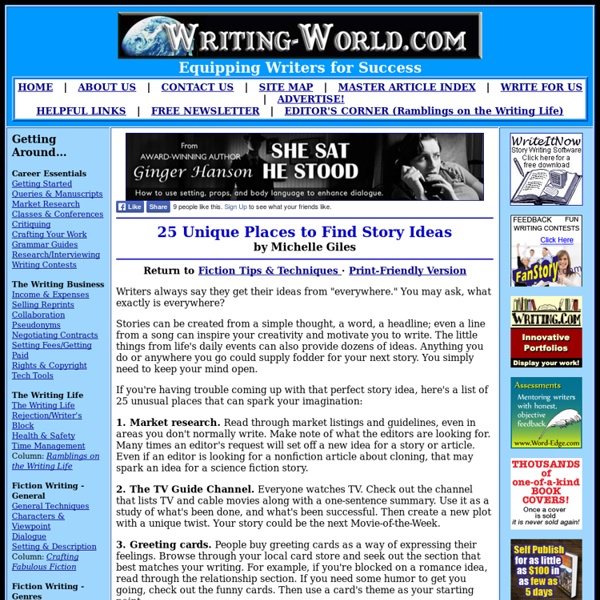 25 Unique Places to Find Story Ideas by Michelle Giles Return to Fiction Tips & Techniques · Print-Friendly Version Writers always say they get their ideas from "everywhere." You may ask, what exactly is everywhere? Stories can be created from a simple thought, a word, a headline; even a line from a song can inspire your creativity and motivate you to write. If you're having trouble coming up with that perfect story idea, here's a list of 25 unusual places that can spark your imagination: 1. 2. 3. 4. 5. 6. 7. 8. 9. 10. 11. 12. 13. 14. 15. 16. 17. 18. 19. 20. 21. 22. 23. 24. 25. Remember, it doesn't matter how you find your story idea, only that you find it. Find Out More... Five Unusual Places to Look for Article Ideas, by Chryselle D'Silva Dias Story-Starters: Ten Ways to Jump-Start Your Plot - Anne M. Stuck in the Middle of Your Story? Related:  dianemarycowan2 • Plot and Structure

Five Unusual Places to Look for Article Ideas by Chryselle D'Silva Dias Every writer knows that ideas for articles are everywhere around us. Books, websites and magazines on writing tell us to seek inspiration from our lives and the world we live in. To invite the muse, we're asked to make lists of our hobbies, life experiences and the topics we dearly want to write about. We do all that and yet find ourselves often staring at a blank page wondering if there is anything left to write about. If you are having trouble finding ideas for an article or a nonfiction submission, here are five under-your-noses places that could spark off some much-needed brainwaves: Forums: Go where your target audience is and find out what it is they need to know. There you have it. Copyright © 2007 Chryselle D'Silva Dias This article may not be reprinted without the author's written permission. Chryselle D'Silva Dias is a UK-based freelance writer whose print and online articles have been published in the UK, US, and India.

How To Diagnose Your Novel's Strengths and Weaknesses by Darcy Pattison ithout reading a single word of your novel, I can tell you some of its strengths and weaknesses by using the “Shrunken Manuscript” technique. The technique was born accidentally several years ago, when a friend asked me to critique her manuscript. We were a bit short on money at the time and I didn’t want to print out a couple hundred pages to read. Instead, I single-spaced the manuscript, reduced the font and then printed it out. What I saw amazed me. Chapters that covered ten pages were now encapsulated on just three pages. I decided to be really radical. I’ve heard the complaints: you can’t read a manuscript at that font size. How to Use the Shrunken Manuscript Technique Here’s how the process works. Now, step back and observe. For example, if you have two strong chapters at the beginning and three strong chapters at the end, you have the dreaded sagging middle problem. At first, students were skeptical that this Shrunken Manuscript technique worked. 1. 30 pages. 2. 3. 4. Characters

Where Should a Second Chapter Start? on October 12th, 2010 by Fiction Editor Beth Hill and last modified on October 12, 2010 We’ve all read advice about the first chapter—how and where to begin a story; what makes for strong openings, depending on the genre; what not to include in the first paragraph or page of chapter one; what to include in a novel’s opening. We understand that a good opening chapter sets the tone and introduces lead characters and gets the plot rolling. We know almost as much about the final chapter, the final paragraph, and the final words. About how to finish a story so that it’s complete and satisfying and induces the reader to want more. Yet, where’s the advice for chapter two? What do we do to move from that compelling first chapter—the one that’s seen more rewrites than all other pages combined and multiplied by 10—and into the meat of the story? We certainly want to continue the tone we’ve established. Sure there are. Where should a second chapter start? 1. 2.

Outlining Your Novel: Create a Roadmap to Storytelling Success | Writer's Digest Tutorials Writers often look upon outlines with fear and trembling. Won’t outlines limit your creativity and rob the joy of discovery from your first draft? Why spend all that time preparing for a story when you could be writing it? But when properly understood and correctly wielded, the outline is one of the most powerful weapons in a writer’s arsenal. Outlines ensure cohesion and balance in the finished story. During this 63-minute video tutorial, you’ll learn: How to choose the right type of outline for you How to brainstorm plot ideas How to discover your characters How to organize your scenes How to format your finished outline How to put your outline to use

Novel Writing: Choosing a Method that Works Best for You by Margo L. Dill riting a novel is one of the biggest accomplishments of a writer’s life. Every novelist has her own way of writing a novel. From outlining to sticky notes to just writing the darn thing, novel writing is a process that can differ for each writer. Outlining The very word, outlining, causes some writers to break out in hives. Lynn Viehl, who has written 42 novels in 5 genres under different pseudonyms, writes about outlining novels on her blog, Paperback Writer. Most writers, who use outlining, swear by it, and they usually write an outline that looks something like this: Chapter ONE: The Confrontation Character A will confront Character B about an affair, which Character A will deny. Chapter Summaries Chapter summaries take outlining one step further with more details about what will happen in each chapter. Sometimes with outlining, people get hung up on the format. Prologue: Newspaper report of Julie’s parents and her in the car accident. Note cards/Sticky Notes Barri L. Margo L.

7 Reasons to Write an Entire 1st Draft before Going Back to the Beginning There are important benefits of writing a novel or memoir from beginning to end before going back and starting again. Here are seven of them that you should know. 1) Rather than stop and start over again and again, when you allow yourself to write a rough first draft from beginning to end, you actually finish a draft all the way through. 2) Until you write the end, you do not have a clear grasp of what comes earlier. 3) You accomplish what you set out to do. Martha Alderson, aka the Plot Whisperer, is the author of the Plot Whisperer series of writing resources for authors: The Plot Whisperer Book of Writing Prompts: Easy Exercises to Get You Writing , The Plot Whisperer Workbook: Step-by-Step Exercises to Help You Create Compelling Stories, companion workbook to The Plot Whisperer: Secrets of Story Structure Any Writer Can Master (Adams Media, a division of F+W Media), Blockbuster Plots Pure & Simple (Illusion Press) and several ebooks on plot.

8 Ways to Write Better Characters The very first novel I, aged 20-something, wrote, is unpublished and will stay that way. An ensemble coming-of-age story of four teenagers, its weaknesses are legion: tame story line, thin action, unimaginatively rendered settings, hackneyed themes (though I will say the dialogue wasn’t bad). Having now published seven novels, I look back on that manuscript and realize that underlying the shortcomings I just mentioned lies its principal flaw: poor character development. The kids just don’t pop. So I’ve been pleased to read reviews of my latest novels (the Rita Farmer mysteries) that praise the characterization—and I’ve been struck by the number of them that cite the realism of my characters’ relationships. While plot is important, good characters can make or break your book. Let’s consider, to start, the categories of relationships we might write in our fiction: … and so many more. Everybody has relationships. Then, explore who they are beyond themselves. Here’s how. 1. 2. 3. No. 4. 5. 6.

The Best Story Structure Tool We Know By Glen C. Strathy Of the various story structure models or theories that exist, we have chosen to focus mainly on Dramatica, which was developed by Melanie Anne Phillips and Chris Huntley. We chose to work with this model because it is the only one that... 1. 2. 3. 4. What's more, Dramatica embodies certain insights into story structure that no other theory does. The aim of this website is to present practical tips and exercises to help writers, while avoiding a lot of theory. Finding A Roadmap For Creating Your Novel The most important thing you need from any story theory is help creating a good roadmap for your novel. Specifically, you want help creating a plot that will keep the reader engaged and bring the story to an emotionally satisfying conclusion. You especially want a clear story structure that will guide you through those times when you get stuck and haven’t the faintest idea which direction to head next. Traditional Story Theory Is Too General 1. 2. 3. 1. 2. 3. 4. 5. Genres

Red Pencil Round-Up: Self-Editing for Fiction Writers ou’ve finished your manuscript. You’ve celebrated the accomplishment of completing something many people dream of but never do. You’ve let your manuscript sit for at least a few weeks, and now you’re ready to begin editing. Self-editing is considerably different than being in a creative mode, so send your muse to vacation in Tahiti; it’s time for your inner editor to pick up the red pencil and get to work. Self-editing is a lot more work than you many realize. The best way to approach self-editing is to break the steps into manageable pieces. Choose one area of focus to start with and go through your entire manuscript page-by-page with that one element in mind, from Chapter One to the end. But wait... Remember: writing is rewriting. You may be tempted to take what you perceive as a shortcut and try to check every element on the editing list on page one, and then move on to page two, and so on. If you’re ready to join the round up, grab your red pencil and let’s get started! In Medias Res