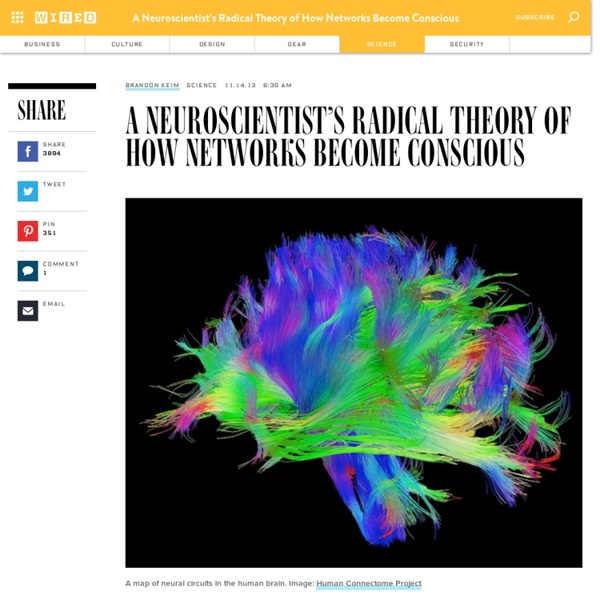 It’s a question that’s perplexed philosophers for centuries and scientists for decades: Where does consciousness come from? We know it exists, at least in ourselves. But how it arises from chemistry and electricity in our brains is an unsolved mystery. Neuroscientist Christof Koch, chief scientific officer at the Allen Institute for Brain Science, thinks he might know the answer. According to Koch, consciousness arises within any sufficiently complex, information-processing system. All animals, from humans on down to earthworms, are conscious; even the internet could be. “The electric charge of an electron doesn’t arise out of more elemental properties. What Koch proposes is a scientifically refined version of an ancient philosophical doctrine called panpsychism — and, coming from someone else, it might sound more like spirituality than science. WIRED: How did you come to believe in panpsychism? Christof Koch: I grew up Roman Catholic, and also grew up with a dog. Koch: That’s true.

'Exploding head syndrome' common in young people: Nearly one in five startled by loud, non-existent noises Washington State University researchers have found that an unexpectedly high percentage of young people experience "exploding head syndrome," a psychological phenomenon in which they are awakened by abrupt loud noises, even the sensation of an explosion in their head. Brian Sharpless, a Washington State University assistant professor and director of the university psychology clinic, found that nearly one in five -- 18 percent -- of college students interviewed said they had experienced it at least once. It was so bad for some that it significantly impacted their lives, he said. Consciousness in humans and non-human animals: Recent advances and future directions. Melanie Boly1,2,3*, Anil K. Seth4,5, Melanie Wilke6,7, Paul Ingmundson8,

Growing Fruit In Pots In cooler climates or homes with no garden space, it is often preferable to plant fruit trees in pots. This is a guide about growing fruit trees in pots. Read and rate the best solutions below by giving them a "thumbs up". Article: Growing Fruit In Pots Container gardeners (and fruit lovers) rejoice! Psychosurgeons Use Lasers to Burn Away Mental Illness A brain surgeon begins an anterior cingulotomy by drilling a small hole into a patient’s skull. The surgeon then inserts a tiny blade, cutting a path through brain tissue, then inserts a probe past sensitive nerves and bundles of blood vessels until it reaches a specific cluster of neural connections, a kind of switchboard linking emotional triggers to cognitive tasks. With the probe in place, the surgeon fires up a laser, burning away tissue until the beam has hollowed out about half a teaspoon of grey matter. This is the shape of modern psychosurgery: Ablating parts of the brain to treat mental illnesses. Which might remind you of that maligned procedure, the lobotomy. But psychosurgeries are different.

'Collision Course' in the Science of Consciousness: Grand Theories to Clash at Tucson Conference  by Deepak Chopra, MD and Stuart Hameroff, MD, Anesthesiology, Psychology, Center for Consciousness Studies, The University of Arizona, Tucson, Arizona The nature of consciousness, the reality it conveys, and our place in the universe remains unknown. Since ancient times, two types of views have approached these problems. In Western science and philosophy, consciousness is strictly a by-product of brain activity, the reality it perceives is not to be trusted ('Plato's cave', Descartes' 'brain-in-a-vat', Dennett's 'multiple drafts'). On the other hand, in Eastern philosophy, consciousness is primary, the fundamental basis for reality. William James popularized consciousness at the turn of the 20th century, but behaviorist psychologists then focused on quantifying brain function.

How to Clean Your Liver with 5 Natural Liver-Cleansing Tips Your liver is like the maid of your body, cleaning up all the toxins you put into it, and therefore keeping all internal systems running smoothly. The modern diet, environmental pollutants, and our increasing dependence on toxic personal care products have put our livers on serious overtime. For this reason, it’s important to know how to clean your liver thoroughly and effectively – oh, and naturally. Your liver works to cleanse the blood and remove toxic substances that we’ve eaten, inhaled, or rubbed on our bodies. Addiction is not a disease: A neuroscientist argues that it’s time to change our minds on the roots of substance abuse The mystery of addiction — what it is, what causes it and how to end it — threads through most of our lives. Experts estimate that one in 10 Americans is dependent on alcohol and other drugs, and if we concede that behaviors like gambling, overeating and playing video games can be addictive in similar ways, it’s likely that everyone has a relative or friend who’s hooked on some form of fun to a destructive degree. But what exactly is wrong with them? For several decades now, it’s been a commonplace to say that addicts have a disease. However, the very same scientists who once seemed to back up that claim have begun tearing it down.

Consciousness Might Emerge from a Data Broadcast Quantum physicist Wolfgang Pauli expressed disdain for sloppy, nonsensical theories by denigrating them as “not even wrong,” meaning they were just empty conjectures that could be quickly dismissed. Unfortunately, many remarkably popular theories of consciousness are of this ilk—the idea, for instance, that our experiences can somehow be explained by the quantum theory that Pauli himself helped to formulate in the early 20th century. An even more far-fetched idea holds that consciousness emerged only a few thousand years ago, when humans realized that the voices in their head came not from the gods but from their own internal spoken narratives. Not every theory of consciousness, however, can be dismissed as just so much intellectual flapdoodle. During the past several decades, two distinct frameworks for explaining what consciousness is and how the brain produces it have emerged, each compelling in its own way. This neural buffer does more than process recent sensory inputs.

Top 15 Open Source / libre Sécurité / Hacking Tools 1. Nmap Nmap (“Network Mapper”) is a free and open source (license) utility for network discovery and security auditing. Nmap uses raw IP packets in novel ways to determine what hosts are available on the network, what services (application name and version) those hosts are offering, what operating systems (and OS versions) they are running, what type of packet filters/firewalls are in use, and dozens of other characteristics. Nmap homepage.