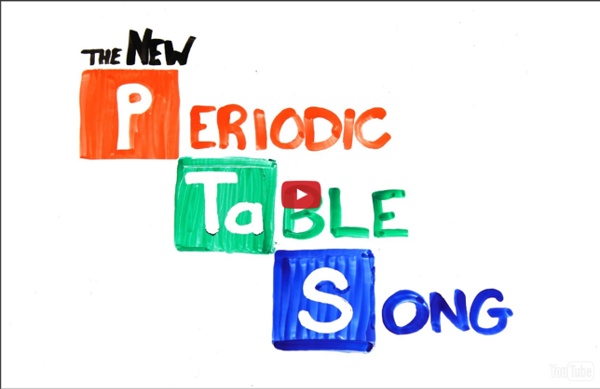 This video is currently unavailable. Sorry, this video is not available on this device. Play Pause Replay Stop live playback

Periodic Table Mystery By Chuck Roser, Retired Chemistry Instructor North Carolina School of Science and Mathematics National Science Education Standards Grades 9–12 (HU2—Evidence and Models, HB2—Structure and Properties of Matter) Objective Just How Small Is an Atom? - Jonathan Bergmann Whether we’re zooming in to the wavelength of a gamma ray or zooming out to the size of a galaxy, it can be difficult to wrap our heads around the big numbers we’re measuring—like nanometers (10-9meters) or gigameters (109). Take a look at these efforts to represent big numbers. What are the strengths of each? How would you represent a large number (like a gigameter)? Cary Huang: The Scale of the Universe 2 NOVA: A Sense of Scale: String Theory Chris Jordan pictures some shocking stats More than 2,400 years ago, the Greek philosopher Democritus began thinking about how many times matter could be divided.

MIT Creates ‘Plug-and-Play’ CO2 Scrubber for Existing Power Plants MIT researchers have invented a “plug-and-play” carbon dioxide scrubbing system that they say could be added relatively easily to any existing power plant, and uses less power than existing systems. Most existing systems rely on complex plumbing to divert the steam used to drive the turbines that generate power in these plants. Such systems are not practical as retrofits to existing plants, MIT says. By contrast, the MIT system requires no steam connection and can operate at lower temperatures than other scrubbing technology. The new electrochemical CO2 scrubber system is described in a paper published online in the journal Energy and Environmental Science, written by doctoral student Michael Stern, chemical engineering professor T.

WATCH: The chemistry of a smartphone Do you know what goes into an iPhone 6, or any smartphone for that matter? This video pulls out the periodic table and identifies the dozens of chemical elements lurking inside a smartphone so its battery can run and its screen can be strong, colourful and touchable. Thanks to patent laws and trade secrets, there's precious little information available about what goes into manufacturing your typical smartphone, but with the help of the Compound Interest blog, the American Chemical Society's YouTube channel Reactions has done some investigating. First off, each smartphone will contain 300 milligrams of silver and 30 milligrams of gold. In fact, all the gold and silver used in smartphones over the course of a single year will cost more than $2.5 billion. And you can’t do anything on your phone without a battery, and this will likely be a lithium-ion battery.

Chapter 4: The Periodic Table & Bonding Skip Navigation Middle School Chemistry big ideas about the very small Lessons The Energy Story - Introduction Energy is one of the most fundamental parts of our universe. We use energy to do work. Energy lights our cities. Energy powers our vehicles, trains, planes and rockets. Meet 115, the Newest Element on the Periodic Table If you've learned all the elements from actinium to zirconium, it's time to head back to the periodic table, where there's a new, extremely heavy element in town. The new element doesn't have an official name yet, so scientists are calling it ununpentium, based on the Latin and Greek words for its atomic number, 115. (Related: Read a feature on element hunters in National Geographic magazine.) In case you forgot your high school chemistry, here's a quick refresher: An element's atomic number is the number of protons it contains in its nucleus. The heaviest element in nature is uranium, which has 92 protons. But heavier elements-which have more protons in their nucleus-can be created through nuclear fusion.

Digging for Rare Earths: The Mines Where iPhones Are Born MOUNTAIN PASS, Calif. -- About 60 miles southwest of Las Vegas, in a mine some 500 feet deep, the beginnings of an iPhone come to life. But the sleek, shiny iPhone is far, far removed from the rocks pulled out of this giant hole, which looks like a deep crater on the moon. A very deep crater. The ground is covered with rust-colored boulders, rocks, and pebbles. The walls etched with striations in varying shades of black, are notched, every 75 feet or so, creating steps that only a giant could use to climb out of the pit. The base of the mine is several football fields wide. The Photosynthesis Cycle" The Earth's atmosphere is mostly composed of nitrogen. Oxygen makes up just 21 percent of the air we breathe. Carbon dioxide, argon, ozone, water vapor and other gasses make up a tiny portion of it, as little as 1 percent. These gasses probably came from several processes as the Earth evolved and grew as a planet. But some scientists believe that the Earth's atmosphere would never have contained the oxygen we need without plants.

Imaging Breakthrough: See Atomic Bonds Before and After Molecular Reaction - Wired Science For the first time, scientists have visually captured a molecule at single-atom resolution in the act of rearranging its bonds. The images look startlingly similar to the stick diagrams in chemistry textbooks. Until now, scientists were only able to infer molecular structures. Using atomic force microscopy, the individual atomic bonds — each a few ten-millionths of a millimeter long — that connect the carbon molecule’s 26 carbon and 14 hydrogen atoms are clearly visible. The results are reported online May 30 in Science.

You know that the transition metals provide little help in defining trends, so why include them? Kids not confused enough? To be fair, however, a number of charts DO exclude them, so it's nothing original. 2. Alkaline Metals and Halogens just an element apart; At the other end of the familiarity scale, this is probably the most unique and best application of my Trends Chart - wrapping the ends together so the most giving and the most needy elements are just a step apart when showing the major operatve factor of electron affinity. The ordinary periodic table has them about as far apart as possible, and the picture of a teacher attempting to convince a class of skeptics that this is an important "proximity" is ludicrous. The Earth and Beyond Welcome to The Earth and Beyond Hello, my name is Tim O'Brien. I'm an astronomer working at The University of Manchester's Jodrell Bank Observatory.

The First Images of Molecules Breaking and Reforming Chemical Bonds That question has been answered a long time ago. Resonance does not mean that the structure of the molecule changes in time, but that the real structure can be thought of as a weighted average (in this case, the weights are the same) of many structures which are called resonant. It has been measured that all the carbon−carbon bonds in benzene have the same length. That's not consistent with the idea of alternating single and double bonds, but rather with the idea that all the bonds are similar. Therefore, the bonds can be rationalized as having an order of 1.5. A better idea of the structure of benzene is given by the molecular orbital (MO) theory, which states that the electrons are delocalized in the molecule, with probabilities derived from the individual atomic orbitals, according to Quantum Mechanics principles.