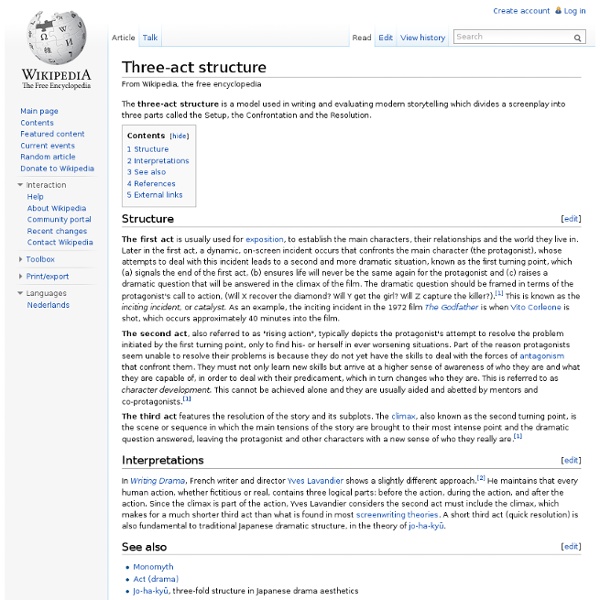 Three- act structure Plot Line Graph by Wendell Wellman The three-act structure is a model used in writing, including screenwriting, and in evaluating modern storytelling that divides a fictional narrative into three parts, often called the Setup, the Confrontation and the Resolution. Structure[edit] The second act, also referred to as "rising action", typically depicts the protagonist's attempt to resolve the problem initiated by the first turning point, only to find him- or herself in ever worsening situations. Interpretations[edit] In Writing Drama, French writer and director Yves Lavandier shows a slightly different approach.[2] He maintains that every human action, whether fictitious or real, contains three logical parts: before the action, during the action, and after the action. SJ Murray, a documentary film maker, feature film writer, and professor at Baylor University, explores why the three act structure matters in her book, Three Act What? See also[edit] References[edit]

Culture Culture (Latin: cultura, lit. "cultivation"[1]) is a modern concept based on a term first used in classical antiquity by the Roman orator Cicero: "cultura animi" (cultivation of the soul). This non-agricultural use of the term "culture" re-appeared in modern Europe in the 17th century referring to the betterment or refinement of individuals, especially through education. During the 18th and 19th century it came to refer more frequently to the common reference points of whole peoples, and discussion of the term was often connected to national aspirations or ideals. In the 20th century, "culture" emerged as a central concept in anthropology, encompassing the range of human phenomena that cannot be directly attributed to genetic inheritance. the evolved human capacity to classify and represent experiences with symbols, and to act imaginatively and creatively; andthe distinct ways that people, who live differently, classified and represented their experiences, and acted creatively.[2]

Non-Sense About 42 Students Montreal and LA 2 Teachers 10 Stories 1 Rocket into space Working together each day to get a robot back to her home. Students will research, explore and discover as the robot makes her way across North America. Robot Hearts Stories is an experiential learning project that uses collaboration and creative problem solving to put education directly in the hands of students. The experience begins when a robot crash lands in Montreal and must make her way to LA in order to find her space craft and return home. At the same time, Robot Hearts Stories extends beyond the classroom, as the project welcomes involvement from a global audience. Robot Heart Stories is the first in a trilogy of experiential learning projects from award winning storytelling pioneer Lance Weiler and creative producer Janine Saunders. It is our feeling that together we can empower endless creativity and, with the help of a robot, we can reboot education. Come join the fun! Contact Us How do I follow the progress?