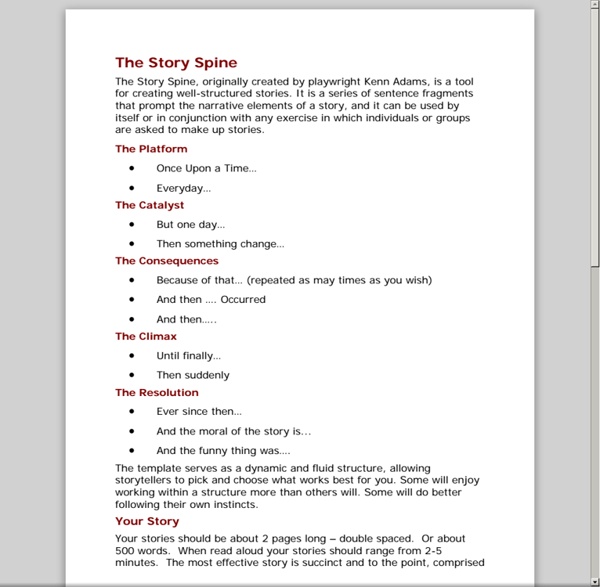 The tone of voice triangle Is humor part of your brand’s personality? Do you wonder if it should be? When humor fits with your brand’s online identity, it can be a powerful social media tool. In this article I’ll show you examples of three ways you can use humor to grab attention. Define Your Online Tone Humor is an excellent addition to your social media toolbox. When to Discard the Three-Act Story Structure There are times to follow the rules of story, and there are times to break the rules. When should you use the three-act story structure, and when should you discard it entirely? Story Structure in Ken Follett’s Century Trilogy I’ve finally gotten around to finishing Ken Follett’s Century Trilogy with Edge of Eternity, and hoo boy, there is a lot that happens in that book. One could argue that there’s a lot that happens in all three books, given that they cover a one-hundred-year timespan, but the final installment felt much fuller than the other two. For some reason, it felt like the third book had more climactic peaks than the previous two, even though history has always been a series of events happening simultaneously in multiple locations.

Deconstructing the art and science of storytelling "Brand storytelling" is currently the biggest buzz trend in marketing. Stories are coming to the fore because brands today have to grab the attention of consumers. Since time immemorial, storytellers have been honing the art of creating compelling content that immediately hooks people in. Bill Murray on storytelling If you are any kind of fan of Bill Murray at all, then you will enjoy this interview he did with Howard Stern last week. Murray, who is famously hard to get a hold of, does not do a lot of interviews like this, so it was a rare treat. It's not a performance. This is just two guys talking, but there are some gems in there and even a few bits relevant for presenters and speakers of all types. You can listen to the audio here, but I highlight two of the more relevant points for presenters below.

hero's journey "A Practical Guide to Joseph Cambell’s The Hero with a Thousand Faces" by Christopher Vogler © 1985 “There are only two or three human stories, and they go on repeating themselves as fiercely as if they had never happened before.” In the long run, one of the most influential books of the 20th century may turn out to be Joseph Campbell’s THE HERO WITH A THOUSAND FACES. The book and the ideas in it are having a major impact on writing and story-telling, but above all on movie-making. Filmmakers like John Boorman, George Miller, Steven Spielberg, George Lucas, and Francis Coppola owe their successes in part to the ageless patterns that Joseph Campbell identifies in the book.

Monomyth Joseph Campbell's monomyth, or the hero's journey, is a basic pattern that its proponents argue is found in many narratives from around the world. This widely distributed pattern was described by Campbell in The Hero with a Thousand Faces (1949).[1] Campbell, an enthusiast of novelist James Joyce, borrowed the term monomyth from Joyce's Finnegans Wake.[2] Campbell held that numerous myths from disparate times and regions share fundamental structures and stages, which he summarized in The Hero with a Thousand Faces: A hero ventures forth from the world of common day into a region of supernatural wonder: fabulous forces are there encountered and a decisive victory is won: the hero comes back from this mysterious adventure with the power to bestow boons on his fellow man.[3]

Diegesis Diegesis /ˈdaɪəˈdʒiːsəs/ is a style of fiction storytelling that presents an interior view of a world in which: details about the world itself and the experiences of its characters are revealed explicitly through narrativethe story is told or recounted, as opposed to shown or enacted.[1] In diegesis the narrator tells the story. The narrator presents the actions (and sometimes thoughts) of the characters to the readers or audience. In contrast to mimesis[edit] Diegesis (Greek διήγησις "narration") and mimesis (Greek μίμησις "imitation") have been contrasted since Plato's and Aristotle's times.

The Irresistible Power of Storytelling as a Strategic Business Tool - Harrison Monarth It’s not often that you hear Budweiser and Shakespeare mentioned in the same breath. But according to new research from Johns Hopkins University, the Bard’s deft application of storytelling techniques featured prominently in the beer company’s Super Bowl commercial. In “Puppy Love,” a perfectly adorable yellow lab becomes inseparable friends with a Clydesdale. Sneaking out of his pen, the pup and the horse “talk” in the stables and cavort on an idyllic farm –until someone comes to adopt the dog.

What I Learned Writing Dreamlander: 6 Types of Courageous Characters What’s the secret to creating characters readers love? There must be a secret, right? Some magic formula that will make readers fall as madly in love with our characters as we have with other writers’ larger-than-life heroes and heroines. You’re probably thinking I’m going to say, “Sorry, but no, there’s no magic formula. Just hard work and luck.” The Seven Basic Plots The Seven Basic Plots: Why We Tell Stories is a 2004 book by Christopher Booker, a Jungian-influenced analysis of stories and their psychological meaning. Booker worked on the book for 34 years.[1] Summary[edit] [edit]