20 Ways to Use Augmented Reality in Education 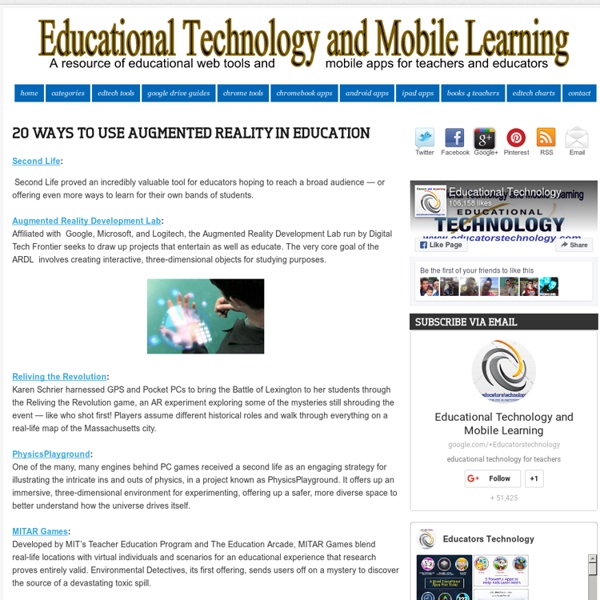 Second Life proved an incredibly valuable tool for educators hoping to reach a broad audience — or offering even more ways to learn for their own bands of students. Augmented Reality Development Lab: Affiliated with Google, Microsoft, and Logitech, the Augmented Reality Development Lab run by Digital Tech Frontier seeks to draw up projects that entertain as well as educate. The very core goal of the ARDL involves creating interactive, three-dimensional objects for studying purposes. Reliving the Revolution: Karen Schrier harnessed GPS and Pocket PCs to bring the Battle of Lexington to her students through the Reliving the Revolution game, an AR experiment exploring some of the mysteries still shrouding the event — like who shot first! Players assume different historical roles and walk through everything on a real-life map of the Massachusetts city. FETCH! Driver’s ed: Toyota teamed up with Saatchi & Saatchi to deliver the world’s cleanest and safest test-drive via augmented reality.

Realidad Aumentada que es "real" y centrado en el aprendizaje Augmented Reality allows you to expand the experience of the real world with information, video, sound, GPS data, and so on. If well utilized, it can be much more than just another cool tech thing… You will see below an example of how Augmented Reality was used to expand the experience of visitors to our school’s Art Exhibit. As students had to reflect on and verbalize their artistic choices, an augmented reality layer was created for viewers of the exhibit. In the process, students were excited about sharing with an authentic audience and had to really recall and reflect. It created a hyperlinked reality that enabled amplification of the viewers’ learning experience that was much more engaging than text. By pointing a tablet or smartphone at a painting, through the viewing lens of Aurasma App, visitors could learn about the artist that influenced the work and techniques that were applied.

5 Top Augmented Reality Apps For Education The concept of augmented reality has been in existence for a few years now despite the fact that many users of mobile devices are under the impression that it is a new phenomenon. New technologies such as Google’s augmented reality glasses which are the first computing eyewear are still in the testing phase. This leads mobile device users to believe augmented reality is new on the horizon. How Integrating Physical Art Into Digital Creations Expands Creativity Students in Cathy Hunt’s art classes are constantly blurring the lines between physically created art and digital creations. In one project, students created fish out of clay using old pinch-potting techniques. But the project didn’t stop there. They then took photos of their creations and used digital tools to paint on the photos, adding color and design without fear that an unknown glaze would ruin their vision. Once they designed their fish, they developed a storyline featuring their creations for a stop motion animation created by the whole group.

The complete guide to virtual reality – everything you need to get started Until recently, virtual reality had been something of a fantasy for storytellers and technologists. As long ago as 1935, American science fiction writer Stanley G Weinbaum described something like virtual reality in a short story called Pygmalion’s Spectacles. “But listen – a movie that gives one sight and sound. Suppose now I add taste, smell, even touch, if your interest is taken by the story. Cómo utilizar la realidad aumentada en la Educación When you were a kid, did you watch RoboCop and totally love the heads-up display? What about the fascinating visuals in Minority Report or Iron Man? They’re basically a form of augmented reality (AR for short). Código Opensource para producciones de Realidad Aumentada Augmented Reality is the name given to technology that integrates virtual data on real world in real time, using for it something technologic. We have some nice examples of uses on our blog. Some people call it "Reality Expanded," but the term "Augmented Reality" was the most famous and there is nothing to do about it. Let's call it "A.R." from now on, to save characters and save the nature and the world. In the future, we will have a section "Learning", explaining details of the process. For now, you can use our to create one, without having to sweat a lot.