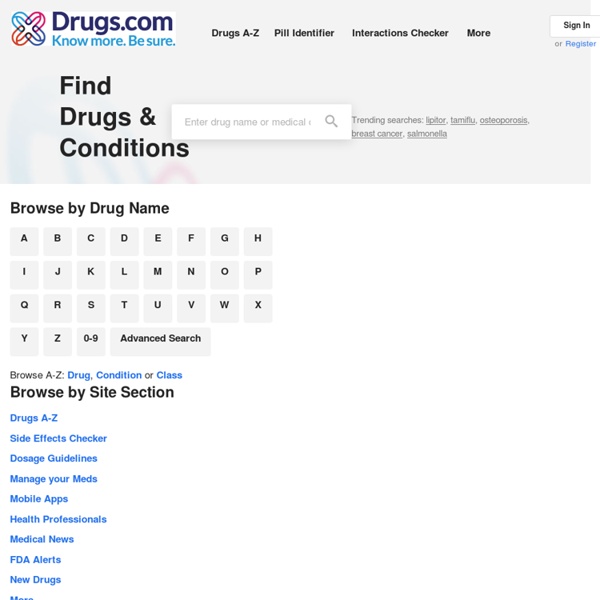 Fatty Acids Types of fatty acids[edit] Three-dimensional representations of several fatty acids Fatty acids that have carbon–carbon double bonds are known as unsaturated. Make Your Own Silhouettes Have you noticed that silhouettes are all the rage these days? I see them in magazines, on blogs, books, and the TV. I’ve priced them out a few times, only to be disappointed by how costly they can be. In kindergarten, I vaguely remember my teacher shining a light at us while we stood by a wall with a big piece of white paper taped on it. It was so hard trying not to wiggle as she traced our shadow which we turned into a silhouette. The 5 Current Genetic Experiments Most Likely to Destroy Humanity If there's one thing scientists have a knack for (other than avoiding sexual contact with other human beings), it's turning seemingly innocent things into horrifying specters of terror. Atoms were just innocent old building blocks of matter up until they were used to level two Japanese cities. Apparently bored with the military weapons as an outlet for their evil, scientists are upping their pant-soiling quotient by genetically engineering monsters out of our livestock and pets.

How Prescription Drugs Get So Wildly Expensive Martin Shkreli is the Internet’s villain of the week. After buying and then immediately jacking up the price of a drug that treats a potentially deadly parasite, he’s become a sneering meme in social media, a think-piece punching bag, and a policy springboard for presidential candidates. He gives a bad name to former hedge fund pharmaceutical CEOs everywhere. PyMOL - Wiki Non-free binaries[edit] On 1 August 2006, DeLano Scientific adopted a controlled-access download system for pre-compiled PyMOL builds (including betas) distributed by the company. Access to these executables is now limited to paying customers but is free for students and teachers. However, the current source code continues to be available at no cost, as are older pre-compiled builds.

Homemade Holidays: Crock Pot Candles Growing up in my house, we always made our own holiday gifts. We were pretty poor, and I suppose it was our only option. But it was never presented to me like that (I didn’t even know what ‘poor’ was, really, and I had a stupendously fabulous childhood full of ‘thing finding’ and ‘government cheese’. But that’s another story.) It was all about crafting our caring into something unique, something personal. Antibiotics on the verge of becoming completely useless (NaturalNews) The journal Lancet Infectious Diseases recently published a sobering piece about how antibiotics are becoming wholly ineffective as treatments for infection. According to the report, even the most powerful antibiotics available are largely inadequate at tackling the emerging forms of new and powerful "super" bacteria. Antibiotic overuse has become a pandemic problem. They are used in animal feed to make animals grow more quickly and they are handed out like candy by many doctors to people with almost any ailment.

The Most Unhealthy Foods You Can Eat Indulging in certain foods is a lot like pounding shots the night before a quiz. Sure, you knew it wasn't a great idea, but there was no way you could have known just how much your night out would tank your GPA. The same goes for your diet. You know that candy, bacon and diet soda aren’t the best bets for your health, but you likely didn't realize that, beyond adding flab to your frame, these foods are also laced with additives and chemicals that can harm your health. Then there are the more stealthy waistline saboteurs. You know, the foods that you think are really healthy, only to discover years later that they’re anything but. Synthesis (very nice instructional course) Chemistry requires an understanding of molecular structure, knowledge of molecular reactivity, and the creativity to combine them in novel situations. A synthetic chemist must be able to translate a two-dimensional drawing into a three-dimensional mental image. This three-dimensional image is then unwrapped and divided into key intermediates, each of which will be unwrapped and divided in turn.

'American Idol' Elimination Night: Who Are the Remaining Top 4? Michael Becker / FOX This week’s American Idol theme of Brit Pop produced some of the strongest vocal performances of the season. Alas, after 60 million votes cast -- according to host Ryan Seacrest -- one of the Top 5 got the boot. Can the Source of Funding for Medical Research Affect the Results? Many clinical research studies are funded by pharmaceutical companies and there is a general perception that such industry-based funding could potentially skew the results in favor of a new medication or device. The rationale underlying this perception regarding the influence of industry funding is fairly straightforward. Pharmaceutical companies or device manufacturers need to increase the sales of newly developed drugs or devices in order to generate adequate profits. It would be in their best interest to support research that favors their corporate goals. Even though this rationale makes intuitive sense, it does not necessarily prove that industry-funding does influence the results of trials.

Protein Data Bank A Structural View of Biology This resource is powered by the Protein Data Bank archive-information about the 3D shapes of proteins, nucleic acids, and complex assemblies that helps students and researchers understand all aspects of biomedicine and agriculture, from protein synthesis to health and disease. As a member of the wwPDB, the RCSB PDB curates and annotates PDB data. The RCSB PDB builds upon the data by creating tools and resources for research and education in molecular biology, structural biology, computational biology, and beyond. Use this website to access curated and integrated biological macromolecular information in the context of function, biological processes, evolution, pathways, and disease states. A Molecular View of HIV Therapy

Somatic Syndrome Disorder Could Mislabel Sick as Mentally Ill <br/><a href=" US News</a> | <a href=" Business News</a> Copy Lori Chapo-Kroger was an active intensive care unit nurse, but after a series of mysterious symptoms began a decade ago, her thinking became "cloudy" and she said her legs "felt like they were made of lead." "I felt like every system in my body was collapsing," said Chapo-Kroger, who lives in Grand Rapids, Mich. "I remember not even being able to stand up to make my own bed.