As form of nepotism; NOT on basis of scientific merites

Conflict of interest. Nepotism. Nepotism is favoritism granted in politics or business to relatives. 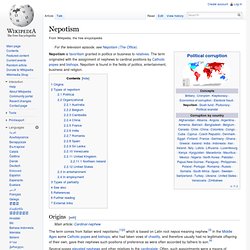 The term originated with the assignment of nephews to cardinal positions by Catholic popes and bishops. Nepotism is found in the fields of politics, entertainment, business and religion. Origins[edit] The term comes from Italian word nepotismo,[1][2] which is based on Latin root nepos meaning nephew.[3] In the Middle Ages some Catholic popes and bishops, who had taken vows of chastity, and therefore usually had no legitimate offspring of their own, gave their nephews such positions of preference as were often accorded by fathers to son.[4] 1993:Albert Heijn EREDOCTORAAT? Elena Ceaușescu. Elena Ceaușescu (Romanian pronunciation: [eˈlena t͡ʃe̯auˈʃesku]; née Lenuța Petrescu; 7 January 1916 – 25 December 1989) was the wife of Romania's Communist leader Nicolae Ceaușescu, and Deputy Prime Minister of Romania. 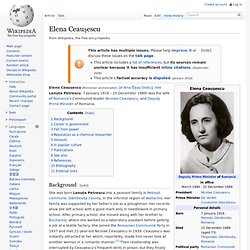 Background[edit] She was born Lenuța Petrescu into a peasant family in Petrești commune, Dâmbovița County, in the informal region of Wallachia. Her family was supported by her father's job as a ploughman. Her records show she left school with a good mark only in needlework in primary school. After primary school, she moved along with her brother to Bucharest, where she worked as a laboratory assistant before getting a job at a textile factory. Career in government[edit] Elena Ceaușescu receiving an honorary doctorate in Manila After the Communists took power, Ceaușescu worked as a secretary in the Ministry of Foreign Affairs and was an unimportant figure until her husband became general secretary of the party. Fall from power[edit] Reputation as a chemical researcher[edit] Ceauşescu, "Doctor Honoris Causa" al Universităţii din Nisa şi după 35 de ani. Parlamentarul francez Lionnel Luca, membru al partidului de guvernământ UMP şi având rădăcini româneşti, a refuzat disticţia argumentând că aceasta şi.a pierdut semnificaţia dacă i-a fost acordată şi lui Ceauşescu, scrie "L'Express". 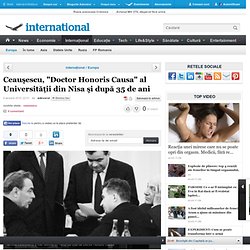 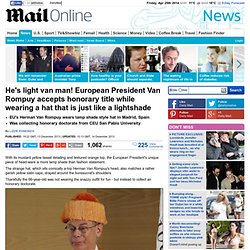 The strange hat, which sits comically a-top Herman Van Rompuy's head, also matches a rather garish yellow satin cape, draped around the bureaucrat's shoulders. Thankfully the 66-year-old was not wearing the snazzy outfit for fun - but instead to collect an honorary doctorate. In vogue? Van Rompuy wore the odd attire to deliver a speech after he was named honorary doctor by CEU San Pablo University today. Soon after his speech, Van Rompuy embraced the Spanish Prime Minister, Mariano Rajoy at the ceremony in Madrid, Spain.

BarrosoEU : I am deeply grateful to be... Objection, Mr Xi. Did you earn that law degree? Xi Jinping with his daughter in Fujian, where he was governor (Xinhua / AP) A LEAKED document from China has raised embarrassing questions over the validity of a law degree awarded to its leader, Xi Jinping, in 2002 at a crucial moment in his rise to rule over the country of 1.3bn people. 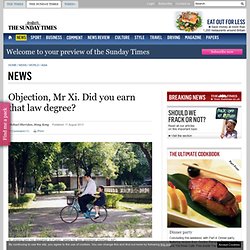 Analysis of Xi’s unpublished dissertation for the degree, a copy of which was handed to The Sunday Times in Hong Kong last week, lends weight to claims among Chinese academics that he used others to help with his thesis. The contents of the work, A Tentative Study on China’s Rural Marketisation, also appeared to have little to do with the discipline of law. Critics of the Communist party allege that Xi, 60, was granted the post-graduate doctorate by the prestigious Tsinghua University merely to burnish his credentials for political leadership. ScienceGuide: Plagiarism at the top? Xi Jinping. President Erdoğan appoints personal doctor ( Prof. Dr. Cevdet Erdöl ) as rector of new health university. Meltem Özgenç - ANKARA President Recep Tayyip Erdoğan has appointed his personal doctor, Prof. 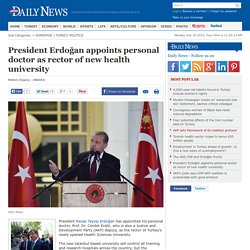 Dr. Cevdet Erdöl, who is also a Justice and Development Party (AKP) deputy, as the rector of Turkey’s newly opened Health Sciences University. The new Istanbul-based university will control all training and research hospitals across the country, but the appointment of Erdöl has drawn criticism over attempted “politicization” of university administrations. The Turkish Medical Association (TTB) strongly criticized the appointment, saying such decisions are examples of the AKP’s efforts to rule over every aspect of life.