The Inevitable Evolution of Bad Science. Bacteria, animals, languages, cancers: all of these things can evolve, which we know from the work of legions of scientists. 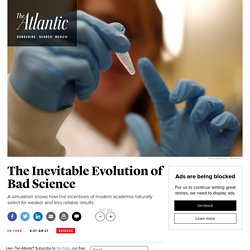 You could argue that science itself also evolves. Researchers vary in their methods and attitudes, in ways that affect their success, and they pass those traits to the students they train. Over time, the very culture of science is sculpted by natural selection—and according to Paul Smaldino and Richard McElreath, it is headed in an unenviable direction. The problem, as others have noted, is that what is good for individual scientists is not necessarily what is good for science as a whole. A scientist’s career currently depends on publishing as many papers as possible in the most prestigious possible journals. Now, imagine you’re a researcher who wants to game this system. This is not a new idea. He and McElreath demonstrated this by creating a mathematical model in which simulated labs compete with each other and evolve—think SimAcademia. Munafo is hopeful. Why People ‘Fly from Facts’ “There was a scientific study that showed vaccines cause autism.” 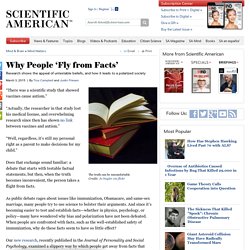 “Actually, the researcher in that study lost his medical license, and overwhelming research since then has shown no link between vaccines and autism.” “Well, regardless, it’s still my personal right as a parent to make decisions for my child.” Does that exchange sound familiar: a debate that starts with testable factual statements, but then, when the truth becomes inconvenient, the person takes a flight from facts. As public debate rages about issues like immunization, Obamacare, and same-sex marriage, many people try to use science to bolster their arguments. And since it’s becoming easier to test and establish facts—whether in physics, psychology, or policy—many have wondered why bias and polarization have not been defeated. Our new research, recently published in the Journal of Personality and Social Psychology, examined a slippery way by which people get away from facts that contradict their beliefs.

Misandry in psychology: reproductive coercion. This is the third part of a four-part series of articles about the bias against men and boys in psychological research. 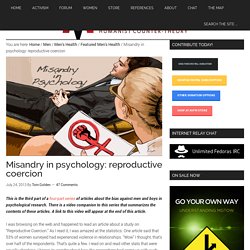 There is a video companion to this series that summarizes the contents of these articles. A link to this video will appear at the end of this article. I was browsing on the web and happened to read an article about a study on “Reproductive Coercion.” As I read it, I was amazed at the statistics. One article said that 53% of women surveyed had experienced violence in relationships. My interest stimulated, I started searching for articles on this particular study.

Suddenly, the results started to make sense. Then, I started to wonder. I needed a copy of the study. I decided to ask the lead researcher, Dr. At that point, I contacted Gabrielle Grow, who had written the Aggie article and congratulated her on a job well done. But precisely why had the big-time journalists not asked the same question? 1. LA Times “Reproductive coercion is a factor in unintended pregnancies” 3. Book Review - Proofiness - By Charles Seife. And that’s precisely why they can be so powerfully, persuasively misleading, as Seife argues in his passionate new book, “Proofiness.” 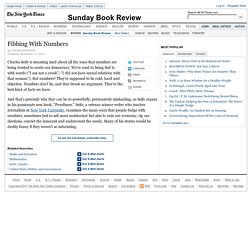 Seife, a veteran science writer who teaches journalism at , examines the many ways that people fudge with numbers, sometimes just to sell more moisturizer but also to ruin our economy, rig our elections, convict the innocent and undercount the needy. Many of his stories would be darkly funny if they weren’t so infuriating. Although Seife never says so explicitly, the book’s title alludes to “truthiness” — the Word of the Year in 2005, according to the American Dialect Society, which defined it as “the quality of preferring concepts or facts one wishes to be true, rather than concepts or facts known to be true.”

The term was popularized by in the first episode of “The Colbert Report.” Seife emphasizes that numbers impress us. Falsifying numbers is the crudest form of proofiness. “Comparing apples and oranges” is another perennial favorite. Concealment and distortion on Gender Symmetry on Partner Violence.