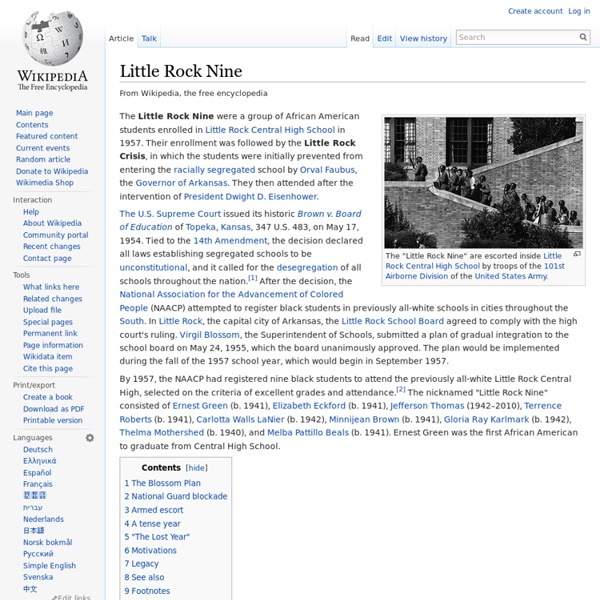 The Little Rock Nine were a group of African American students enrolled in Little Rock Central High School in 1957. Their enrollment was followed by the Little Rock Crisis, in which the students were initially prevented from entering the racially segregated school by Orval Faubus, the Governor of Arkansas. They then attended after the intervention of President Dwight D. Eisenhower. The U.S. Supreme Court issued its historic Brown v. By 1957, the NAACP had registered nine black students to attend the previously all-white Little Rock Central High, selected on the criteria of excellent grades and attendance.[2] The nicknamed "Little Rock Nine" consisted of Ernest Green (b. 1941), Elizabeth Eckford (b. 1941), Jefferson Thomas (1942–2010), Terrence Roberts (b. 1941), Carlotta Walls LaNier (b. 1942), Minnijean Brown (b. 1941), Gloria Ray Karlmark (b. 1942), Thelma Mothershed (b. 1940), and Melba Pattillo Beals (b. 1941). The Blossom Plan[edit] This view was short lived, however. Legacy[edit]

1981 Irish hunger strike A flag commemorating the 25th anniversary of the hunger strike The 1981 Irish hunger strike was the culmination of a five-year protest during "the Troubles" by Irish republican prisoners in Northern Ireland. The protest began as the blanket protest in 1976, when the British government withdrew Special Category Status for convicted paramilitary prisoners. In 1978, after a number of attacks on prisoners leaving their cells to "slop out", the dispute escalated into the dirty protest, where prisoners refused to leave their cells to wash and covered the walls of their cells with excrement.

The Little Rock Nine Ernest Green In 1958, he became the first black student to graduate from Central High School. He graduated from Michigan State University and served as Assistant Secretary of Housing and Urban Affairs under President Jimmy Carter. He currently is a managing partner and vice president of Lehman Brothers in Washington, D.C. Elizabeth Eckford Central High 50th Home Page Minnijean Brown was born September 11, 1941, in Little Rock and 16 years old when she entered Central High School. Although all of the nine experienced verbal and physical harassment during the 1957-1958 school year at Central, Brown was first suspended, and then expelled for retaliating against daily torment. In February of 1958, she moved to New York and lived with Doctors Kenneth B. and Mamie Clark, African-American psychologists. She graduated from New York's New Lincoln School in 1959. Brown attended Southern Illinois University and majored in journalism.

Brave Hearts: Remembering the Little Rock Nine, 1957 Civil Rights Movement '50s Beyond religion, beyond class, beyond politics and ideology, for centuries race been the single most contentious, corrosive question in America’s national dialog. Rape during the occupation of Germany Territorial changes and occupational zones of Nazi Germany after its defeat. Includes the front-line along the Elbe from which U.S. troops withdrew in July 1945 As Allied troops entered and occupied German territory during the later stages of World War II mass rapes took place both in connection with combat operations and during the subsequent occupation. Most Western scholars agree that the majority of the rapes were committed by Soviet servicemen, but estimates vary widely. Russian historians have criticized the estimates and argue that these crimes were not widespread. Soviet Military[edit]

Holocaust survivor Henia Bryer: Prisoner number A26188 25 January 2013Last updated at 21:12 ET By Duncan Walker BBC News Henia Bryer had enjoyed a middle class childhood as the daughter of a factory owner The German invasion of Poland in 1939 ended the happy childhood of Henia Bryer. Ahead of Holocaust Memorial Day she tells BBC One how she was sent to four concentration camps, but survived them all. Comfort women Comfort women were women and girls forced into sexual slavery by the Japanese Imperial Army during World War II.[1][2] The name "comfort women" is a translation of a Japanese name ianfu (慰安婦).[3][4] Ianfu is a euphemism for shōfu (娼婦) whose meaning is "prostitute(s)".[5] Estimates vary as to how many women were involved, with numbers ranging from as low as 20,000[6] to as high as 200,000,[7][8] or even as many as 360,000 to 410,000[9] but the exact numbers are still being researched and debated.[10] Many of the women were from occupied countries, including Korea, China, and the Philippines,[11] although women from Burma, Thailand, Vietnam, Malaysia, Taiwan, Indonesia and other Japanese-occupied territories were used for military "comfort stations". According to testimony, young women from countries under Japanese Imperial control were abducted from their homes.

Rodney King Rodney Glen King (April 2, 1965 – June 17, 2012) was an African-American construction worker and serial criminal who became nationally known after being beaten by Los Angeles police officers, following a high-speed car chase on March 3, 1991. A local witness, George Holliday, videotaped much of it from his balcony. The footage shows five officers surrounding King, several of them striking him repeatedly, while other officers stood by. Integration of Central High School - Black History My TV provider is not listed. Why not? We are currently working on adding more TV providers. Please check back frequently to see if your TV provider has been added. Why do I need to log in to watch some video content? History of suicide Attitudes toward suicide have varied through time and across cultures. Antiquity and Middle Ages[edit] In general, the pagan world, both Roman and Greek, had a relaxed attitude towards the concept of suicide, a practice that was only outlawed with the advent of the Christians, who condemned it at the Council of Arles in 452 as the work of the Devil.

Little Rock Central High School Integration Home » Events » Little Rock Central High School Integration Background: The desegregation of Central High School in Little Rock, Arkansas, gained national attention on September 3, 1957, when Governor Orval Faubus mobilized the Arkansas National Guard in an effort to prevent nine African American students from integrating the high school. U.S. Has World's Highest Incarceration Rate (August 2012) Since 2002, the United States has had the highest incarceration rate in the world. Although prison populations are increasing in some parts of the world, the natural rate of incarceration for countries comparable to the United States tends to stay around 100 prisoners per 100,000 population. The U.S. rate is 500 prisoners per 100,000 residents, or about 1.6 million prisoners in 2010, according to the latest available data from the Bureau of Justice Statistics (BJS).1 Men make up 90 percent of the prison and local jail population, and they have an imprisonment rate 14 times higher than the rate for women.2 And these men are overwhelmingly young: Incarceration rates are highest for those in their 20s and early 30s. Prisoners also tend to be less educated: The average state prisoner has a 10th grade education, and about 70 percent have not completed high school.3 Incarceration rates are significantly higher for blacks and Latinos than for whites. References

i didn't mean to. I didn't know what I was doing. by carlicagardner13 Mar 21

the little rock nine was a group of african american kids that had been going to segregated schools all their lives. When segregated schools were deemed unconstitutional, and that african american students were permitted to go to school with white children, their hard journey began. These nine kids enrolled in former all white schools, and they were horrased and threateded throughout their whole high school careers. by mariclaregatter Mar 15