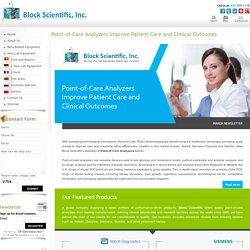 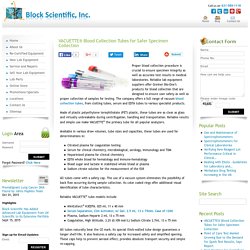 Reliable lab equipment suppliers offer Greiner Bio-One’s products for blood collection that are designed to ensure user safety as well as proper collection of samples for testing. The company offers a full range of vacuum blood collection tubes, from clotting tubes, serum and EDTA tubes to various specialist products. Made of plastic polyethylene terephthalate (PET) plastic, these tubes are as clear as glass and virtually unbreakable during centrifugation, handling and transportation. Reliable results and simple use make VACUETTE® the primary tube for all popular analyzers. Fast and Sensitive QuikScreen Plus Drug Cup Test. Drug abuse is a growing concern in many countries throughout the world. 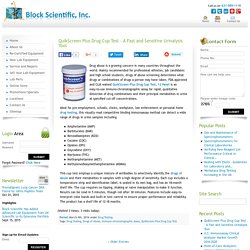 Zika - The Latest Global Public Health Challenge. The Zika virus is the new health threat that the world is facing. 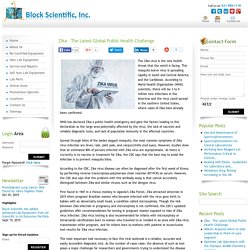 This mosquito borne virus is spreading rapidly in South and Central America and the Caribbean. According to World Health Organization (WHO) scientists, there will be 3 to 4 million new infections in the Americas and the virus could spread in the southern United States, where cases of Zika have already been confirmed. WHO has declared Zika a public health emergency and gave the factors leading to this declaration as the large area potentially affected by the virus, the lack of vaccines and reliable diagnostic tests, and lack of population immunity in the affected countries. Spread through bites of the Aedes aegypti mosquito, the most common symptoms of Zika virus infection are fever, rash, joint pain, and conjunctivitis (red eyes). 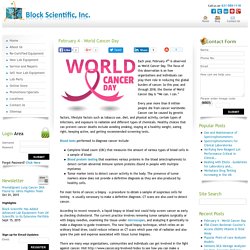 The focus of this observation is on how organizations and individuals can play their role in reducing the global burden of cancer. So this year, and through 2018, the theme of World Cancer Day is “We can. I can.” Every year more than 8 million people die from cancer worldwide. Cancer can be caused by genetic factors, lifestyle factors such as tobacco use, diet, and physical activity, certain types of infections, and exposure to radiation and different types of chemicals.

Vitamin D Testing in Clinical Laboratories. Welcome 2016: Set Meaningful Goals and Work to Achieve Them. The U.S. diagnostic and medical laboratories industry is growing rapidly in terms of technological advancements, output, demand for laboratory equipment and services, and employment. 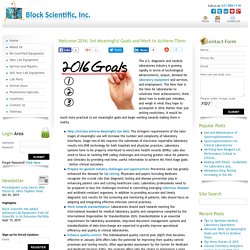 The New Year is the time for laboratories to celebrate their achievements, think about how to avoid past mistakes, and weigh in what they hope to accomplish in 2016. Rather than just setting resolutions, it would be much more practical to set meaningful goals and begin working towards making them a reality. December 1 - World AIDS Day. December 1 has been observed as World AIDS Day since 1988. 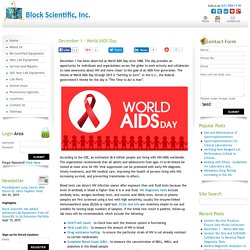 The day provides an opportunity for individuals and organizations across the globe to work actively and collaborate to raise awareness about HIV and move closer to the goal of an AIDS-free generation. The theme of World AIDS Day through 2015 is “Getting to Zero”. In the U.S., the federal government’s theme for the day is “The Time to Act Is Now”. According to the CDC, an estimated 36.9 million people are living with HIV/AIDS worldwide. The organization recommends that all adults and adolescents from ages 13 to 64 should be tested at least once for HIV. Blood Tests for Improved Cancer Screening. Detecting cancer at an early stage is vital as it enables early treatment. 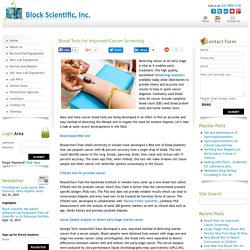 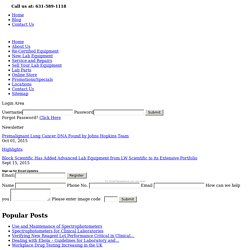 Symptoms caused by this impaired brain function include headaches, problems with concentration, memory lapses and sleep disturbances. Concussion is a common sports-related childhood head injury, which if not resolved, can pose serious health risks. In new study published in Academic Emergency Medicine, researchers at Orlando Health have come up with a simple blood test that can detect concussions in children with 94 percent accuracy. The team says that the test could help reduce the need for computed tomography (CT) scans. A CT scan, which is the current diagnostic approach to detecting brain injuries, comes with radiation exposure and is expensive. The research team found the biomarker, called glial fibrillary acidic protein (GFAP) found around the brain’s neurons gets released into the bloodstream only when there is an injury, making it easy to detect. 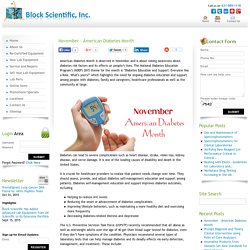 The National Diabetes Education Program’s (NDEP) 2015 theme for the month is “Diabetes Education and Support: Everyone Has a Role. What’s yours?” Which highlights the need for ongoing diabetes education and support among people with diabetes, family and caregivers, healthcare professionals as well as the community at large. Diabetes can lead to severe complications such as heart disease, stroke, vision loss, kidney disease, and nerve damage. The ViroCap - A New Test that Can Detect Any Virus. Viral tests are done to detect infection-causing viruses. Accurate diagnosis of viruses often requires numerous tests and can prove a lengthy and time-consuming process. A new test called the ViroCap could provide the solution. The team of scientists at the Washington University School of Medicine in St. Louis that developed this viral test claims that it can detect virtually any known virus that infects people and animals.

October 12 - World Arthritis Day. October 12 has been observed as World Arthritis Day since 1996. Initiated by Arthritis and Rheumatism International (ARI) and managed by the European League Against Rheumatism (EULAR), this global campaign aims at raising awareness about rheumatic and musculoskeletal diseases (RMDs), supporting people living with RMDs, and also influencing public policy.

This year’s theme, “It’s in your hands, take action”, is a message for caregivers, healthcare professionals, policy-makers, researchers and the general public to use every opportunity to take action and make a difference to the quality of life of people with RMDs. Arthritis can affect men, women and children. About 350 million people worldwide have arthritis.

More than 50 million persons in the U.S. are affected by this chronic disease and it is the number one cause of disability among Americans. Cancer Diagnosis - Blood Test Could Replace Costly Biopsies. In addition to lab tests of the blood, urine, or other body fluids and imaging procedures such as CT scan and ultrasound, physicians often recommend a biopsy to diagnose cancer. Though it is the most reliable way to detect cancerous cells, a biopsy is invasive, time-consuming, costly, and sometimes risky. In fact, s study presented at the 2014 Chicago Multidisciplinary Symposium in Thoracic Oncology found biopsies to be the most costly tool prescribed in lung cancer diagnosis with each biopsy procedure costing an average of $14,634 per patient. Medical News Today recently reported that researchers from the U.K. have developed a new blood test which they claim could actually replace the biopsy as the gold standard for cancer detection.

Carried out at the Royal Brompton Hospital and the UK’s National Heart and Lung Institute (NHLI), at Imperial College London, the study involved 223 preoperative patients with confirmed and suspected primary and secondary lung malignancies. October - National Breast Cancer Awareness Month. October is observed as Breast Cancer Awareness Month in the United States. This annual campaign aims at raising awareness about the importance of the early detection of breast cancer. Though most women are aware about the disease, only few take the steps to have a plan in place to detect the disease in its early stages and to encourage others to do the same.

Cancer is caused by abnormal changes in the genes responsible for regulating the growth of cells and keeping them healthy. The most common cancer in women worldwide, breast cancer is a malignant tumor arising from the uncontrolled growth of breast cells. The American Cancer Society (ACS) estimates that about 230,000 new cases of invasive breast cancer will be diagnosed in women in the U.S. in 2015 and that about 40,000 women will die of the disease. While some breast cancers are slow-growing, others can be aggressive. Premalignant Lung Cancer DNA Found by Johns Hopkins Team. Circulating tumor DNA (ctDNA) is a promising biomarker in oncology. ctDNA carries genetic information from malignant tumors and can be obtained from peripheral blood samples. A team of Johns Hopkins scientists worked with tissue, blood and DNA from six people with precancerous and cancerous lung lesions, and identified DNA alterations that were in premalignant lung lesions.

September 21 is World Alzheimer’s Day. New Urine Test Could Reduce Need for Blood Samples. Urine tests provide information to help in the diagnosis, monitoring and treatment of a wide range of diseases. Routine urinalysis includes visual, chemical and microscopic examination. September - National Cholesterol Education Month. September is observed as National Cholesterol Education Month in the United States with the aim to increase awareness about the importance of maintaining healthy cholesterol levels. New Blood Test Could Predict Breast Cancer Relapse. Offering hope for cancer patients, researchers at The Institute of Cancer Research (ICR) in the U.K. have now developed a new blood test that could predict breast cancer recurrence 8 months earlier than conventional methods such as scans.

The test could provide an early warning of the disease returning after chemotherapy and surgery. September - National Prostate Cancer Awareness Month. New Blood Test Detects Pancreatic Cancer In Its Early Stage. Early diagnosis can improve the survival rates of any cancer type and also allow physicians to initiate life-saving treatment before the disease becomes fatal. New Blood Test Predicts Breast Cancer Five Years in Advance. New Ebola Vaccine - Light at the End of the Tunnel. The world is heaving a sigh of relief with the news of the discovery of a new vaccine against Ebola. The preliminary results of a WHO-led trial in Guinea, the results of which were published in The Lancet, show that “VSV-EBOV”, an experimental Ebola vaccine, is highly effective against the deadly virus.

The aim of the Guinea vaccination trial which began in affected communities in March 2015, was to assess the efficacy, effectiveness and safety of a single dose of VSV-EBOV using a ring vaccination strategy. The ring vaccination involves immunizing the immediate contacts of a person who falls ill with a virus so that a protective ring is created around them to stop transmission. Up to 4000 family members, neighbors, and co-workers of around 100 Ebola patients voluntarily participated in the trial. July 28 is World Hepatitis Day. According to the reports from the World Health Organization (WHO), 400 million people are living with hepatitis B and C worldwide, while 1.4 million die due to these infections every year. In 2010, WHO decided to observe July 28 every year as World Hepatitis Day.