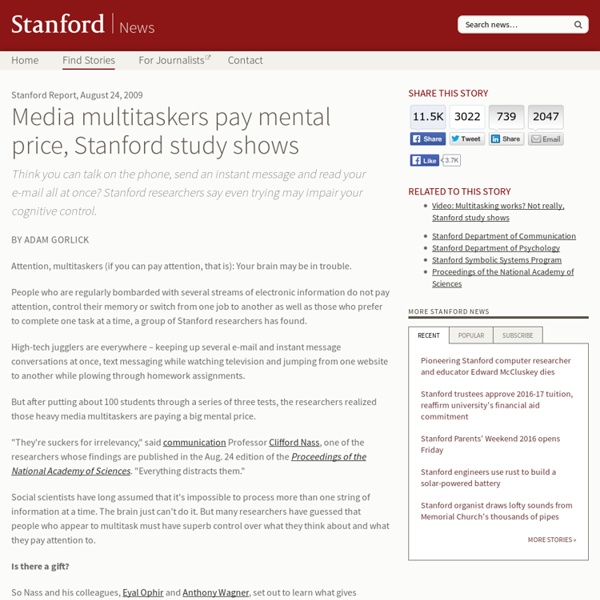 Stanford Report, August 24, 2009 Think you can talk on the phone, send an instant message and read your e-mail all at once? Stanford researchers say even trying may impair your cognitive control. By Adam Gorlick Attention, multitaskers (if you can pay attention, that is): Your brain may be in trouble. People who are regularly bombarded with several streams of electronic information do not pay attention, control their memory or switch from one job to another as well as those who prefer to complete one task at a time, a group of Stanford researchers has found. High-tech jugglers are everywhere – keeping up several e-mail and instant message conversations at once, text messaging while watching television and jumping from one website to another while plowing through homework assignments. But after putting about 100 students through a series of three tests, the researchers realized those heavy media multitaskers are paying a big mental price. Is there a gift? Still puzzled Related:  Research

Is Multitasking More Efficient? Shifting Mental Gears Costs Time, Especially When Shifting To Less Familiar Tasks WASHINGTON - New scientific studies reveal the hidden costs of multitasking, key findings as technology increasingly tempts people to do more than one thing (and increasingly, more than one complicated thing) at a time. Joshua Rubinstein, Ph.D., of the Federal Aviation Administration, and David Meyer, Ph.D., and Jeffrey Evans, Ph.D., both at the University of Michigan, describe their research in the August issue of the Journal of Experimental Psychology: Human Perception and Performance, published by the American Psychological Association (APA). Whether people toggle between browsing the Web and using other computer programs, talk on cell phones while driving, pilot jumbo jets or monitor air traffic, they're using their "executive control" processes -- the mental CEO -- found to be associated with the brain's prefrontal cortex and other key neural regions such as the parietal cortex. Article: "Executive Control of Cognitive Processes in Task Switching," Joshua S. Rubinstein, U.S.

Create a Concept Map Once you've done some preliminary research, begin to "map out" significant ideas to create aconcept map. A concept map is simply a way to visually display the concepts and relationships among ideas. This will help you to further organize your ideas and define your topic. Let's look at how a concept map on "sustainable development" is developed. First, write down the main idea in the center. Draw a circle around the idea. Here, "sustainable development" is the central theme. Next, think of some issues related to the central theme. Only one of these possible sub-issues will be fully explored. For each issue, think of sub-concepts that relate to it and connect them to the appropriate issue. Here, each of the three issues have sub-ideas for possible research exploration. Continue to brainstorm possible ideas. Like this sample, your concept map will grow. At this point, select the issue that has the most potential for further research. Think of sub-issues that will support each concept.

Scholars Turn Their Attention to Attention - The Chronicle Review Imagine that driving across town, you've fallen into a reverie, meditating on lost loves or calculating your next tax payments. You're so distracted that you rear-end the car in front of you at 10 miles an hour. You probably think: Damn. By contrast, imagine that you drive across town in a state of mild exhilaration, multitasking on your way to a sales meeting. That illusion of competence is one of the things that worry scholars who study attention, cognition, and the classroom. "Heavy multitaskers are often extremely confident in their abilities," says Clifford I. Indeed, last summer Nass and two colleagues published a study that found that self-described multitaskers performed much worse on cognitive and memory tasks that involved distraction than did people who said they preferred to focus on single tasks. Experiments like that one have added fuel to the perpetual debate about whether laptops should be allowed in classrooms. In a famous paper in 1956, George A. Wait a minute.

How to select a Master's thesis topic if your advisor won't suggest one? - Academia Stack Exchange You'll be amazed at how much the choice of Master's thesis will influence your long-term interest in the field, prospects for jobs within and outside of academia. I'd suggest picking up some mainstream journals or magazines in your field and see what is currently trendy in the field, and what are bread and butter topics. Having a birds eye view of what's going on in the field allows you to be strategic about your topic, with the goal of planning a successful career. Most likely, a successful career is one that will hook into an existing community of researchers in a topic, with a reliable source of funds that pay for conferences, departments, and students to populate them. A strategic topic is one that has the potential to make an impact in the field, and has the potential to cross-over into related disciplines, or even to have practical applications to real people (god forbid). Finally, and most importantly, choose a topic that gets your blood flowing.

The Positive and Negative Effects of Video Games - Raise Smart Kid Is playing video games good or bad for you? It can be both. Video games are frowned upon by parents as time-wasters, and worse, some education experts think that these games corrupt the brain. Playing violent video games are easily blamed by the media and some experts as the reason why some young people become violent or commit extreme anti-social behavior. “Video games change your brain,” according to University of Wisconsin psychologist C. Below are the good and bad effects of video games – their benefits and disadvantages, according to researchers and child experts: The Benefits: Positive Effects of Video Games When your child plays video games, it gives his brain a real workout. Following instructionsProblem solving and logic – When a child plays a game such as The Incredible Machine, Angry Birds or Cut The Rope, he trains his brain to come up with creative ways to solve puzzles and other problems in short burstsHand-eye coordination, fine motor and spatial skills. Click here for:

Nation & World | Multitasking hurts brain's ability to focus, scientists say Originally published June 6, 2010 at 9:18 PM | Page modified June 6, 2010 at 9:23 PM SAN FRANCISCO — When one of the most important e-mail messages of his life landed in his in-box a few years ago, Kord Campbell overlooked it. Not just for a day or two, but 12 days. He finally saw it while sifting through old messages: A big company wanted to buy his Internet start-up. The message had slipped by him amid an electronic flood: two computer screens alive with e-mail, instant messages, online chats, a Web browser and the computer code he was writing. While he managed to salvage the $1.3 million deal after apologizing to his suitor, Campbell continues to struggle with the effects of the deluge of data. His wife, Brenda, complains, "It seems like he can no longer be fully in the moment." This is your brain on computers. Scientists say juggling e-mail, phone calls and other incoming information can change how people think and behave. More broadly, cell phones and computers have transformed life.

How to choose a thesis topic | The Three Month Thesis One of the most common questions I get asked is how to choose a thesis topic. It can be a frustrating problem finalising your research ideas. You have to commit to something, but how do you know you’re setting out on the right track? In this post, first I’ll explain what makes a good research topic, then how to choose a thesis topic and how to do the right things early to avoid problems later. Thinking about the end result, your examiners will be looking for research which is; novel (original)set in the context of the existing research in the field, andcompetently executed When choosing a thesis topic, it makes sense to use these criteria to help you. Novelty It’s incredibly hard to come up with a completely new idea. There are three approaches to novelty. The second approach is to pick a specific subject you want to study, and identify a question or problem that hasn’t been addressed before in that niche. The third is to apply a new methodology. Context This is because Competence 1. 2. 3.

4 technology trends every librarian needs to know | Facet Publishing About these ads Share this: Like this: Related The Top Technologies Every Librarian Needs to KnowIn "Technology" A guide to Scoop.it and other tools for curating contentIn "Marketing" Reflecting on the future of academic and public librariesIn "Academic libraries" Leave a Reply Follow Get every new post delivered to your Inbox. Join 2,636 other followers Build a website with WordPress.com %d bloggers like this: