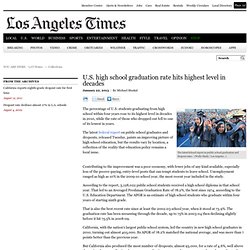 Dropouts down, graduates up, state reports. State officials Wednesday reported modest improvements in dropout and graduation rates and said they were especially heartened with gains made by such groups as Latino and African American students. 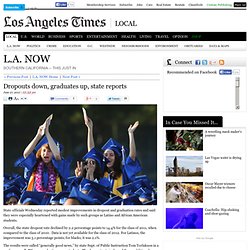 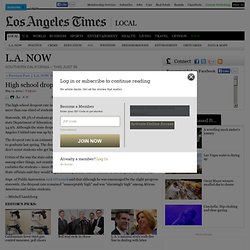 Statewide, 68.3% of students graduated and 20.1% dropped out, according to data released by the state Department of Education. For the Los Angeles Unified School District, the dropout rate was 34.9%. Although the state dropout rate was down 1 percentage point from the previous year, the Los Angeles Unified rate was up by more than 3 percentage points. Nearly Half of Blacks, Latinos Drop Out, School Study Shows. Nearly half of the Latino and African American students who should have graduated from California high schools in 2002 failed to complete their education, according to a Harvard University report released Wednesday. 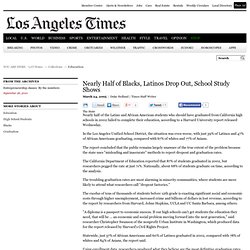 UC acceptance rate of California seniors at record low. The chances of in-state high school seniors gaining admission to the University of California worsened this year, as more of them applied and the number accepted dropped 2.2%, according to data released Thursday. 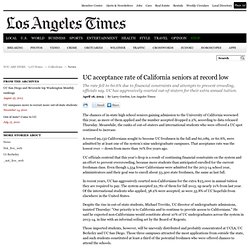 Meanwhile, the ranks of out-of-staters and international students who were offered a UC spot continued to increase. A record 99,132 Californians sought to become UC freshmen in the fall and 60,089, or 60.6%, were admitted by at least one of the system's nine undergraduate campuses. Rate of Minorities Attending College on Decline. WASHINGTON — The percentage of minority young people attending college has plummeted since the mid-1970s, and the decline, surprisingly, has been about as sharp for middle-class students as poor ones, a report said Sunday. 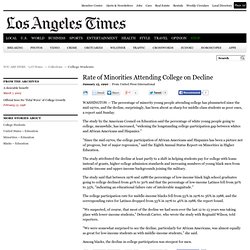 The study by the American Council on Education said the percentage of white young people going to college, meanwhile, has increased, "widening the longstanding college-participation gap between whites and African Americans and Hispanics. " "Since the mid-1970s, the college participation of African Americans and Hispanics has been a picture not of progress, but of major regression," said the Eighth Annual Status Report on Minorities in Higher Education. The study attributed the decline at least partly to a shift in helping students pay for college with loans instead of grants, higher college admission standards and increasing numbers of young black men from middle-income and upper-income backgrounds joining the military. Low achievement imperils black students in L.A., report says. African American students in Los Angeles County demonstrate significant learning gaps by second grade, which widen with age and lead to the highest school dropout rate among all races, according to a new report released Monday. 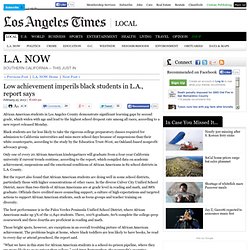 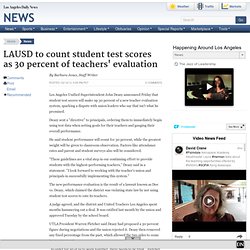 Deasy sent a "directive" to principals, ordering them to immediately begin using test data when setting goals for their teachers and gauging their overall performance. He said student performance will count for 30 percent, while the greatest weight will be given to classroom observation. Gains on State Tests Slow Down at Schools. Improvement in statewide achievement scores has slowed as schools find progress harder to maintain in the third year of California's school accountability program, an analysis of state data showed Wednesday. 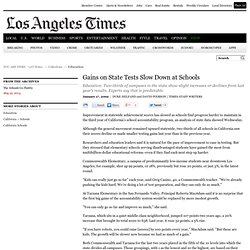 Although the general movement remained upward statewide, two-thirds of all schools in California saw their scores decline or made smaller testing gains last year than in the previous year. Researchers and education leaders said it is natural for the pace of improvement to ease in testing. But they stressed that elementary schools serving disadvantaged students have gained the most from multibillion-dollar educational reforms--even if they find each next step up harder. Commonwealth Elementary, a campus of predominantly low-income students near downtown Los Angeles, for example, shot up 99 points, or 18%, previously but rose 20 points, or just 3%, in the latest round. Lowest Average SAT Scores in Los Angeles County - California Schools Guide - Los Angeles Times. 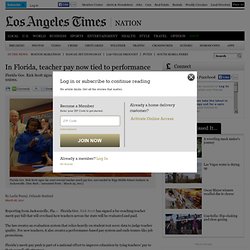 Rick Scott has signed a far-reaching teacher merit-pay bill that will overhaul how teachers across the state will be evaluated and paid. The law creates an evaluation system that relies heavily on student test score data to judge teacher quality. Florida's merit-pay push is part of a national effort to improve education by tying teachers' pay to their overall effectiveness. Deasy wants 30% of teacher evaluations based on test scores. L.A. schools Supt. John Deasy announced Friday that as much as 30% of a teacher's evaluation will be based on student test scores, setting off more contention in the nation's second-largest school system in the weeks before a critical Board of Education election.

Leaders of the teachers union have insisted that there should be no fixed percentage or expectation for how much standardized tests should count — and that test results should serve almost entirely as just one measure to improve instruction. Deasy, in contrast, has insisted that test scores should play a significant role in a teacher's evaluation and that poor scores could contribute directly to dismissal. In a Friday memo explaining the evaluation process, Deasy set 30% as the goal and the maximum for how much test scores and other data should count. In an interview, he emphasized that the underlying thrust is to develop an evaluation that improves the teaching corps and that data is part of the effort. LAUSD Class Sizes Put On Trial By Teachers Union Seeking More Jobs. Positive Effects of Reducing Class Sizes. California's class size reduction program, the most significant school reform in decades, was presented statewide to school districts in 1996-97 as a means to improve student achievement, particularly in reading and math in the primary grades.

The rapid pace of implementation has created many challenges for boards of education, school administrators and teachers. The major concern was hiring and placing new teachers and creating new classes, and Simi Valley Unified completed those tasks in record time. Personnel administrators developed innovative strategies to accomplish the task, attracting teachers from other states, hiring retired and temporary teachers, diminishing substitute pools, and filling gaps with novices and emergency permit teachers. Budget cuts push some classrooms way over capacity. Letters: Teachers hold keys to school reform. Re "Views on schools offer a study in contrasts," March 3 Add L.A. Mayor Antonio Villaraigosa and his eventual successor to the list of leaders whose impact on education reform is negligible.

For the record, the list includes the president and Congress, the governor and Legislature, and the Los Angeles Unified School District, the school board and the teachers union. AAV of Tracing the Roots of Teacher Tenure - Historical Documents. LAUSD grants teacher tenure with little review, Times investigation finds. A Times investigation found that the Los Angeles Unified School District routinely grants tenure to new teachers after cursory reviews -- and sometimes none at all. Teacher Tenure Debate: How to Modify Due-Process Rules. Education eyes were on Washington this week to see what President Obama would say about schools in his State of the Union address. Gov. Christie Offers First Peek at Education Reform Bills. Gov.