“We’re not scientifically there yet. Despite what you may have heard in the media, there is nothing like a consensus of scientific opinion that this is a problem.

Because there is natural variability in the weather, you cannot statistically know for another 150 years.”
— UN IPCC’s Tom Tripp, a member of the UN IPCC [Intergovernmental Panel on Climate Change] since 2004 and listed as one of the lead authors and serves as the Director of Technical Services & Development for U.S. Magnesium.

“Please remain calm: The Earth will heal itself — Climate is beyond our power to control…Earth doesn’t care about governments or their legislation. You can’t find much actual global warming in present-day weather observations. Climate change is a matter of geologic time, something that the earth routinely does on its own without asking anyone’s permission or explaining itself.”
— Nobel Prize-Winning Stanford University Physicist Dr. Robert B. Laughlin, who won the Nobel Prize for physics in 1998, and was formerly a research scientist at Lawrence Livermore National Laboratory.

“The dysfunctional nature of the climate sciences is nothing short of a scandal. Science is too important for our society to be misused in the way it has been done within the Climate Science Community.” The global warming establishment “has actively suppressed research results presented by researchers that do not comply with the dogma of the [UN] IPCC.”
— Swedish Climatologist Dr. Hans Jelbring of the Paleogeophysics & Geodynamics Unit at Stockholm University.

“The whole idea of anthropogenic global warming is completely unfounded. There appears to have been money gained by Michael Mann, Al Gore and UN IPCC’s Rajendra Pachauri as a consequence of this deception, so it’s fraud.

'Global Warming' is a Crock of Sh*t. Lexicon Shift Alert: global warming gets another name change. Back in 2010, I pointed out that White House science adviser John Holdren had made a shift in naming conventions for the twice renamed “global warming”.

The lexicon shift in 2010 It seems that another shift in the lexicon has occurred, again at the White House. Organizing for Action, President Obama’s campaign machine declared Tuesday that there was a new name. Take the $100,000 Global Warming Believer Challenge! Our Last Year of Freedom? - Christopher Moncktons Warning. Lies, Damned Lies, and Global Warming Statistics. The fiddling with temperature data is the biggest science scandal ever.

Two weeks ago, under the headline “How we are being tricked by flawed data on global warming”, I wrote about Paul Homewood, who, on his Notalotofpeopleknowthat blog, had checked the published temperature graphs for three weather stations in Paraguay against the temperatures that had originally been recorded. 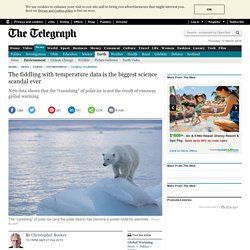 In each instance, the actual trend of 60 years of data had been dramatically reversed, so that a cooling trend was changed to one that showed a marked warming. Following my last article, Homewood checked a swathe of other South American weather stations around the original three. Irony: 1,700 Private Jets Descend on Davos Economic Forum to Discuss Climate Change. Living embodiment of “Do as I say, not as I do” Adan Salazar Prison Planet.com January 21, 2015 World leaders traveling to this year’s Davos Economic Forum in Switzerland will reportedly board about 1,700 private jet flights to reach their destination, where ironically the topic of how to tackle “climate change denial” will be discussed. 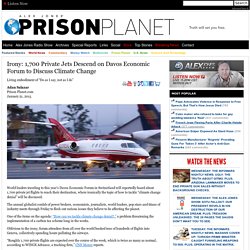 The annual globalist confab of power brokers, economists, journalists, world leaders, pop stars and titans of industry meets through Friday to flesh out various issues they believe to be affecting the planet. Antarctic Sea Ice at Record High, but Global-warming Doomsayers Unimpressed. A report posted by the National Snow & Ice Data Center (NSIDC) on October 7 stated: “Sea ice in Antarctica has remained at satellite-era record high daily levels for most of 2014. 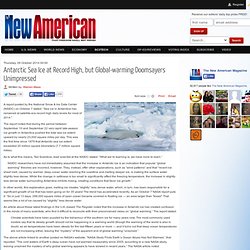 " The report noted that during the period between September 10 and September 22 very rapid late-season ice growth in Antarctica pushed the total sea ice extent upward by nearly 23,000 square miles per day. This was the first time since 1979 that Antarctic sea ice extent exceeded 20 million square kilometers (7.7 million square miles). As to what this means, Ted Scambos, lead scientist at the NSIDC stated: “What we’re learning is, we have more to learn.” Global warming 'hiatus' puts climate change scientists on the spot. It's a climate puzzle that has vexed scientists for more than a decade and added fuel to the arguments of those who insist man-made global warming is a myth. 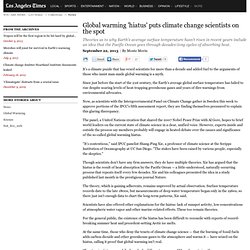 Since just before the start of the 21st century, the Earth's average global surface temperature has failed to rise despite soaring levels of heat-trapping greenhouse gases and years of dire warnings from environmental advocates. Now, as scientists with the Intergovernmental Panel on Climate Change gather in Sweden this week to approve portions of the IPCC's fifth assessment report, they are finding themselves pressured to explain this glaring discrepancy. The panel, a United Nations creation that shared the 2007 Nobel Peace Prize with Al Gore, hopes to brief world leaders on the current state of climate science in a clear, unified voice.

Pdf/2010_Senate_Minority_Report.pdf. Al Gore's Climate Calculations Prove Wrong — Again. 16 Signs That Global Warming Was A Lie And That We Have Now Entered A Period Of Global Cooling - Freedom Outpost. Proved: There is No Climate Crisis.

Lord Monckton’s paper reveals that: 1.The IPCC’s 2007 climate summary overstated CO2’s impact on temperature by 500-2000% 2. CO2 enrichment addS little more than 1°F (0.6 °C) to global mean surface temperature by 2100 3. None of the three key variables whose product is climate sensitivity can be measured directly 4. The IPCC’s values for these key variables are taken from only four published papers, NOT 2,500 4. “Global warming” halted ten years ago, and surface temperature has been falling for seven years 5. None of the computer models relied upon by the IPCC predicted so long and rapid a cooling 6. The IPCC inserted a table into the scientists’ draft, overstating the effect of ice-melt by 1000%; 7. It was proved 50 years ago that predicting climate more than two weeks ahead is impossible 8. Mars, Jupiter, Neptune’s largest moon, and Pluto warmed at the same time as Earth – senseih

No climate crisis. Australia in danger of being left out in cold over global warming. Climate Presentation Annotated 1-1-2010.ppt. Proved: There is No Climate Crisis. 35 Inconvenient Truths: The errors in Al Gore’s movie. Al Gore’s spokesman and “environment advisor,” Ms. 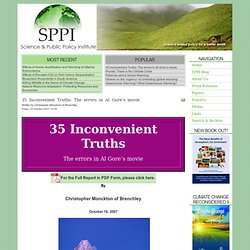 Kalee Kreider, begins by saying that the film presented “thousands and thousands of facts.” It did not: just 2,000 “facts” in 93 minutes would have been one fact every three seconds. The film contained only a few dozen points, most of which will be seen to have been substantially inaccurate. The judge concentrated only on nine points which even the UK Government, to which Gore is a climate-change advisor, had to admit did not represent mainstream scientific opinion.

Ms. Next, Ms. Ms. Ms. Ms. We now itemize 35 of the scientific errors and exaggerations in Al Gore’s movie. Gore says that a sea-level rise of up to 6 m (20 ft) will be caused by melting of either West Antarctica or Greenland. The IPCC says sea-level increases up to 7 m (23 ft) above today’s levels have happened naturally in the past climate, and would only be likely to happen again after several millennia. 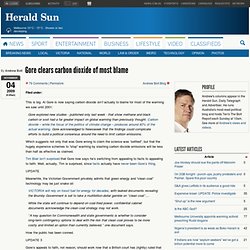 Al Gore is now saying carbon dioxide isn’t actually to blame for most of the warming we saw until 2001: Gore explored new studies - published only last week - that show methane and black carbon or soot had a far greater impact on global warming than previously thought. Global warming scam perpetuated by government, industry, and Wall Street - and taxpayers have been footing the bill! (NaturalNews) For over 20 years, the dogma of man-made global warming has been trumping sound science and even basic logic. 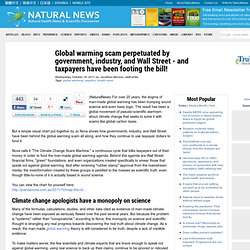 The result has been a global movement of pseudo-scientific alarmism about climate change that seeks to solve it with scams like global carbon taxes. But a simple visual chart put together by Jo Nova shows how governments, industry, and Wall Street have been behind the global warming scam all along, and how they continue to use taxpayer dollars to fund it. Is the Western Climate Establishment Corrupt? Prof Richard Tol wants his name removed from “exaggerated” IPCC report. The IPCC Working Group II report is due out next week. 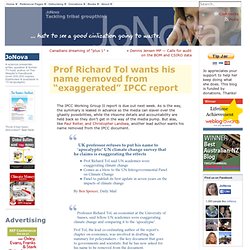 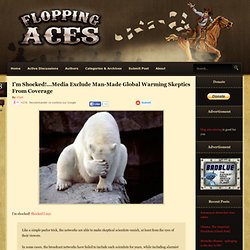 Shocked I say: Like a simple parlor trick, the networks are able to make skeptical scientists vanish, at least from the eyes of their viewers.In some cases, the broadcast networks have failed to include such scientists for years, while including alarmist scientists within the past six months. ABC, CBS and NBC’s lengthy omission of scientists critical of global warming alarmism propped up the myth of a scientific consensus, despite the fact that many scientists and thousands of peer-reviewed studies disagree.Neither CBS nor ABC have included a skeptical scientist in their news shows within the past 1,300 days, but both networks included alarmists within the past 160 days — CBS as recently as 22 days ago. When the networks did include other viewpoints, the experts were dismissed as “out of the scientific mainstream” or backed by “oil and coal companies.”CBS was the worst, ignoring skeptical scientists for 1,391 days, ever since the May 15, 2010, “Evening News.”

Instead, days before the annual autumn re-freeze is due to begin, an unbroken ice sheet more than half the size of Europe already stretches from the Canadian islands to Russia’s northern shores. Scroll down for video News of this figure was widely reported – including by Mailonline - on September 8. Professor Peter Wadhams. UN IPCC: We Predicted Less Antarctic Ice and We Have No Idea Why It Is Increasing - Agenda 21 News. UPDATE: Antarc­tica Set An All Time Record For Sea Ice Extent on Sept 14th.

Read about it here. David Rose is get­ting a lot of hate for telling the truth about shoddy cli­mate models. But this quote from the leaked upcom­ing AR5 jumped out at me: “Most mod­els sim­u­late a small decreas­ing trend in Antarc­tic sea ice extent, in con­trast to the small increas­ing trend in obser­va­tions… There is low con­fi­dence in the sci­en­tific under­stand­ing of the small observed increase in Antarc­tic sea ice extent.” World's top climate scientists confess: Global warming is just QUARTER what we thought - and computers got the effects of greenhouse gases wrong.

Leaked report reveals the world has warmed at quarter the rate claimed by IPCC in 2007 Scientists accept their computers may have exaggerated By David Rose Published: 21:01 GMT, 14 September 2013 | Updated: 15:00 GMT, 19 September 2013. UN global warming data skewed by heat from planes and buildings. But the panel has been mired in controversy since the leaking of emails from the climate change unit at The University of East Anglia, which appeared to show that data used to bolster the IPCC's claims had been manipulated.

Four major errors have also been uncovered in the second of the panel's four reports on the state of global climate change, published in 2007. Most embarrasing for the IPCC was the inaccurate claim that the Himalayan glaciers would disappear by 2035 - hundreds of years earlier than other studies suggest - which was not backed up by any research. The damaging new findings by Mr Watts, whose study has not been peer reviewed, are backed by Professor John Christy, a former lead author on the IPCC who specialises in atmospheric science at the University of Alabama, Huntsville. Scientists accused of suppressing research because of climate sceptic argument. The unnamed scientist, who was asked to peer review Professor Bengtsson’s paper, said in his comments: “Actually it is harmful as it opens the door for oversimplified claims of ‘errors’ and worse from the climate sceptics side.”