Say Something, I’m Giving Up On You. 8 simple words to say when when someone you love is grieving. I'm listening to a man tell a story. 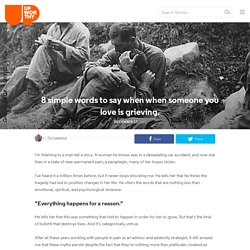 A woman he knows was in a devastating car accident, and now she lives in a state of near-permanent pain; a paraplegic, many of her hopes stolen. I've heard it a million times before, but it never stops shocking me: He tells her that he thinks the tragedy had led to positive changes in her life. He utters the words that are nothing less than emotional, spiritual, and psychological violence: "Everything happens for a reason.

" He tells her that this was something that had to happen in order for her to grow. After all these years working with people in pain as an advisor and adversity strategist, it still amazes me that these myths persist despite the fact that they're nothing more than platitudes cloaked as sophistication. Here's the reality: As my mentor Megan Devine has so beautifully said: 'Some things in life cannot be fixed. Grief is brutally painful. Losing a child cannot be fixed. 5 Things Everyone Needs to Know About Verbal Abuse. Author: To Reach Struggling Students, Schools Need to Be More 'Trauma-Sensitive' Published Online: February 17, 2016 Interview By Elisha McNeil A growing body of evidence highlights the connection between adverse childhood experiences and academic problems. 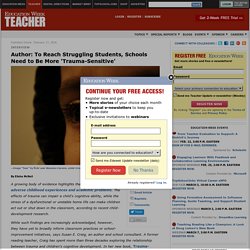 The effects of trauma can impair a child’s cognitive ability, while the stress of a dysfunctional or unstable home life can make children act out or shut down in the classroom, according to recent child-development research. While such findings are increasingly acknowledged, however, they have yet to broadly inform classroom practices or school-improvement initiatives, says Susan E. We recently spoke to Craig about the book and her advice for teachers. What was your goal with this book? I’ve spent my whole life in public schools working with teachers trying to help them manage children that have a lot of behavioral issues. About 30 years ago I went back to school and got a PhD in sociology studying child abuse and neglect. It’s because teachers haven’t been invited to the table.

These instincts help you survive the encounter, but leave evidence behind in the form of body memories. The cortisol response that was triggered by the original trauma, can be re-triggered any time. Sexual Abuse - Why You Don't "Just Get Over It", part 2 — Bay Area Mental Health. Insomniacompulsive behavior patternsoverreactions and sudden floods of emotionself-destructive and impulsive behavioruncontrollable reactive thoughtsinability to make healthy professional or lifestyle choicesdissociative symptoms (“checking out”)feelings of shame, despair, hopelessnessfeeling permanently damaged or “broken”a loss of previously sustained beliefsinability to maintain friendship or other relationshipssexual problems hostility and arguments with family members, employers or co-workerssocial withdrawalfeeling constantly threatened and that you always have to be on guardsubstance abuse In part one of this blog I talked about the different parts of the brain and how they hold trauma - the Reptilian Brain (fight/flight/freeze/submit response), the Old Mammalian Brain (images, emotions, non-verbal memory) and the Thinking Brain or prefrontal cortex (verbal memory, analytical, decision making functions).

Sexual Abuse - Why You Don't "Just Get Over it", part 1 — Bay Area Mental Health. Anger outburstsFeelings of helplessness or worthlessnessInability to sleepDifficulty maintaining relationshipsDifficulty with intimacyFeeling overwhelmed by emotion or feeling hypersensitiveNot being able to say "no"Numbing out with substances or bingingIsolating yourself from family and friendsHaving broken boundaries (Why is Setting Boundaries So Hard?)

Emotional and psychological trauma is the result of extraordinarily stressful events that shatter your sense of security, making you feel helpless and vulnerable in a dangerous world. Any situation that leaves you feeling this way can be traumatic, even it it doesn't cause physical harm. Trauma Survivors have Symptoms Instead of Memories — Bay Area Mental Health. 25 Shocking Caffeine Addiction Statistics. How often during the week do you have caffeine? 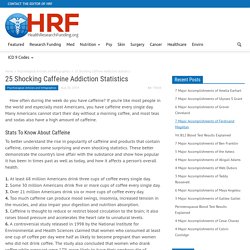 If you’re like most people in the world and especially most Americans, you have caffeine every single day. Many Americans cannot start their day without a morning coffee, and most teas and sodas also have a high amount of caffeine. Stats To Know About Caffeine To better understand the rise in popularity of caffeine and products that contain caffeine, consider some surprising and even shocking statistics. These better demonstrate the country’s love affair with the substance and show how popular it has been in times past as well as today, and how it affects a person’s overall health. 1.

This Is What Coffee & Tea Could Do To Your Brain. According to a number of recent studies, coffee and tea could keep your brain healthy, and provide protection from Alzheimer’s disease, Parkinson’s disease, and depression. 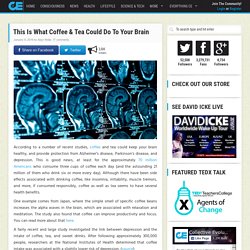 This is good news, at least for the approximately 70 million Americans who consume three cups of coffee each day (and the astounding 21 million of them who drink six or more every day). Although there have been side effects associated with drinking coffee, like insomnia, irritability, muscle tremors, and more, if consumed responsibly, coffee as well as tea seems to have several health benefits.

One example comes from Japan, where the simple smell of specific coffee beans increases the alpha waves in the brain, which are associated with relaxation and meditation. The study also found that coffee can improve productivity and focus.