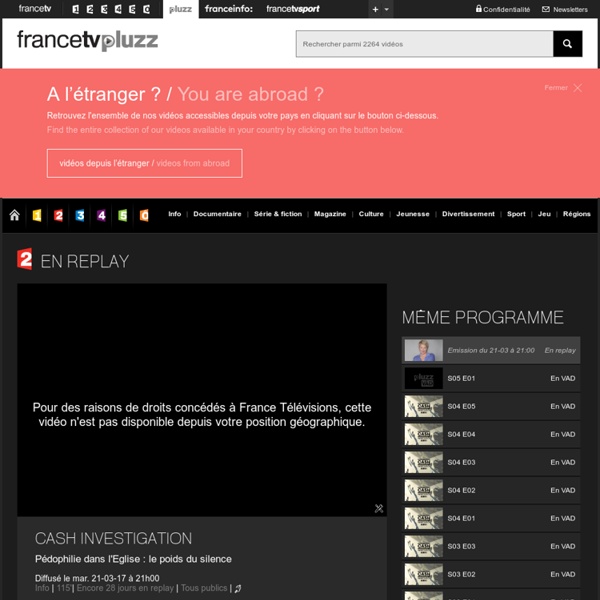 TTIP: le paradis des lobbies industriels Skip to main content DanskNLENFIFRDEELITNOPLPTROSLESSV TTIP: le paradis des lobbies industriels WWF wins Survival’s “Greenwashing of the Year” award Widespread logging has been an acute problem for rainforest tribes for many years. © Margaret Wilson/Survival The World Wildlife Fund (WWF) has won Survival International’s “Greenwashing of the Year” award for partnering with seven companies logging nearly 4 million hectares of forests belonging to the Baka and Bayaka “Pygmies” in central Africa. The award is given to companies or organizations who dress up the destruction of tribal peoples’ forests as conservation.

Apple says you can “feel really good” about buying its products. Don’t believe them. Lisa Jackson, Apple’s VP of environment, policy, and social initiatives, took to the stage at a press event Monday to discuss the company’s new environmental commitments. And from what Jackson, an ex-Environmental Protection Agency administrator, said, Apple’s doing pretty damn well. The details: 93 percent of Apple operations worldwide are powered by renewable energyIn 23 countries, including the United States and China, operations run on 100 percent renewables99 percent of Apple packaging is recycled or sourced from sustainably managed forestsApple is funding the preservation of a million acres of forest in China and 35,000 acres in the eastern U.S.

European Greens on Dalligate – Barroso must now explain Green MEP José Bové (right) with John Dalli Green MEPs José Bové and Bart Staes have called on European Commission President José Barroso to exaplin the reasons behind the dismissal of John Dalli from the EC, in the wake of a leaked report on the OLAF investigation that found no direct evidence of the former commissioner's involvement in an alleged bribe. The report was published by MaltaToday on Sunday, although two of its pages and a three-page interview with the EC's 'Sanco' health director-general Paola Testori Coggi are missing. "This report clearly shows that the OLAF investigation was unable to provide conclusive evidence of the direct involvement of the former European Commissioner John Dalli in the attempt to influence a bribe," the two MEPs said in a statement. Bart Staes, vice-president of the budgetary control committee, said the OLAF report could not be described as an impartial report.

Costa Rica's Vulnerable Cocobolo Threatened by Illegal Logging Costa Rica is usually praised for its commitment to environmental protection and conservation. For instance, the Central American country is running on 99 percent renewable energy and it’s one of the top 20 countries worldwide with the most biodiversity (Costa Rica covers only 0.03 percent of the planet’s surface, but it’s home to 4 to 5 percent of the total species estimated worldwide, particularly insects). So how can Costa Rica allow illegal logging to threaten the rare cocobolo tree, also known as tropical or black rosewood, and other rare trees in its national parks? The Price of Luxury

Walmart’s new green product label is the most misleading yet A giant, 150-foot roll of bubble wrap may not be your idea of an environmentally friendly product, but over at Walmart.com this one-pound ball of plastic now boasts a special “Sustainability Leaders” badge. It’s one of more than 3,000 products tagged with this new green label, which Walmart executives unveiled last week, together with a web portal where shoppers can find these items. Dozens of news accounts hailed the giant retailer’s move as a significant step toward clearing up the confusion and misleading information that often greet consumers trying to make ecologically responsible choices. “The world’s largest retailer took a major and important step toward helping all of us shop more smartly,” declared corporate sustainability consultant Andrew Winston in Harvard Business Review. Triple Pundit concurred: “It’s about to get a lot easier for Walmart.com shoppers to make the responsible choice.”

exclusive: How German companies donate secret money to political parties Read this article in German. German firms strategically donate money to political parties in small sums to pass under the radar of the country's lax party donations laws, a DW investigation has shown. Insurance giants and major industry associations spread their donations to parties out over a year – whether it's campaign season or not – or pass money through subsidiary companies, so that they can donate to their favorite parties. The chief beneficiary often turns out to be Chancellor Angela Merkel's Christian Democratic Union (CDU). Annette Sawatzki of the transparency campaign group LobbyControl, which recently released its own database of party donations, said there was certainly something "systematic" about how companies evade the disclosure threshold and yet still manage to donate six-figure sums to single parties every year.

texte de la pétition: This Company Is Destroying an Island And People Trying to Stop Them Are Being Thrown In Jail Afghanistan Aland Islands Albania Algeria American Samoa 5 Foods That Aren't What They Seem You’d like to think that the name of a food would adequately describe what it is, but that is certainly not always the case. Unfortunately, there are a lot of mystery foods out there. Here are 5 foods that aren’t completely what they claim to be. Wasabi. September 8, 2013 - Natural-Born Killer: Stop Scott Walker’s Open-Pit Mining Assault upon Wisconsin’s Water Additional Background One of Wisconsin’s most beautiful and environmentally sensitive forest wildernesses is to be pierced with a four-mile-long, 1,000-foot-deep gash in the Earth for an open-pit mine to produce deadly taconite. Out of state Gogebic Taconite (GTAC) is nearing approval – through a rigged kangaroo court environmental review process – to begin industrially destroying a 21,000-acre chunk of land in the remote forest highlands of northern Wisconsin called the Penokee Hills. The area is home to hardwood forests, rivers and streams, lakes, and wetlands.