Apple says you can “feel really good” about buying its products. Don’t believe them. Lisa Jackson, Apple’s VP of environment, policy, and social initiatives, took to the stage at a press event Monday to discuss the company’s new environmental commitments. 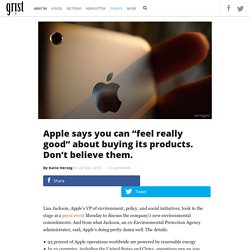 And from what Jackson, an ex-Environmental Protection Agency administrator, said, Apple’s doing pretty damn well. The details: 93 percent of Apple operations worldwide are powered by renewable energyIn 23 countries, including the United States and China, operations run on 100 percent renewables99 percent of Apple packaging is recycled or sourced from sustainably managed forestsApple is funding the preservation of a million acres of forest in China and 35,000 acres in the eastern U.S.

According to Jackson, this means that “every time you send an iMessage or make a FaceTime video call or ask Siri a question, you can feel really good about reducing your impact on the environment.” You can almost hear Steve Jobs patting himself on the back from the great Apple Store in the sky on the brand going green. Bravo à tous : Leclerc cède et change son emballage.

Walmart’s new green product label is the most misleading yet. A giant, 150-foot roll of bubble wrap may not be your idea of an environmentally friendly product, but over at Walmart.com this one-pound ball of plastic now boasts a special “Sustainability Leaders” badge. 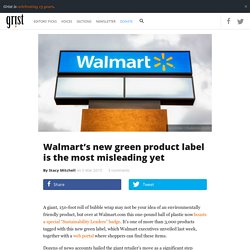 It’s one of more than 3,000 products tagged with this new green label, which Walmart executives unveiled last week, together with a web portal where shoppers can find these items. Dozens of news accounts hailed the giant retailer’s move as a significant step toward clearing up the confusion and misleading information that often greet consumers trying to make ecologically responsible choices. “The world’s largest retailer took a major and important step toward helping all of us shop more smartly,” declared corporate sustainability consultant Andrew Winston in Harvard Business Review.

5 Foods That Aren't What They Seem. Vidéo : Les secrets du marketing alimentaire. 3 Lies Cleaning Product Labels Tell You. Household cleaning products make all sorts of claims on their labels—but some may not mean what you think they do. 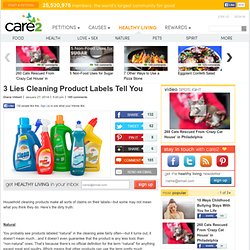 Here’s the dirty truth: Natural You probably see products labeled “natural” in the cleaning aisle fairly often—but it turns out, it doesn’t mean much…and it doesn’t even guarantee that the product is any less toxic than “non-natural” ones. Beware! The 6 Most Mislabeled Foods. It is unthinkable that we allow companies to get away with blatant dishonesty on food labels. 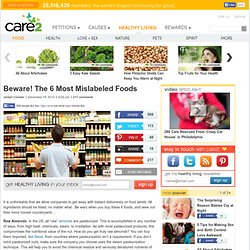 All ingredients should be listed, no matter what. Be wary when you buy these 6 foods, and seek out their more honest counterparts… Raw Almonds. Why Are "All Natural" Products Disappearing From Stores? Perhaps you’ve noticed that “All Natural” has been disappearing from supermarket shelves. 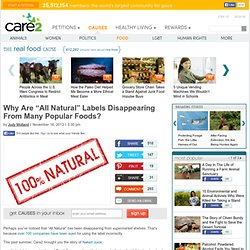 That’s because over 100 companies have been sued for using the label incorrectly. This past summer, Care2 brought you the story of Naked Juice: Naked Juice, a subsidiary of Pepsi Co., recently settled a lawsuit alleging that it falsely advertised some of its juice and smoothie products as all natural and not genetically modified. While the company officially maintains its innocence, it has established a $9 million settlement fund for consumers who feel that they were duped by this marketing scam. The sad thing is that, instead of removing GMOs and any other nasty ingredients, companies have responded by getting rid of the “All Natural” label entirely. These are important considerations, but there are more. The Wall Street Journal reports that: Food labeled “natural” raked in more than $40 billion in U.S. retail sales over the past 12 months.

The problem is that “natural” has no clear meaning. 7 Lies the Food Industry Sells Us. Don’t be fooled by packaging. 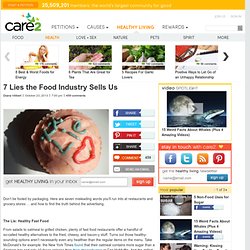 Here are seven misleading words you’ll run into at restaurants and grocery stores … and how to find the truth behind the advertising. The Lie: Healthy Fast Food From salads to oatmeal to grilled chicken, plenty of fast food restaurants offer a handful of so-called healthy alternatives to the fried, cheesy, and bacon-y stuff. Turns out those healthy-sounding options aren’t necessarily even any healthier than the regular items on the menu. Take McDonald’s for example: the New York Times found that their oatmeal contains more sugar than a Snickers bar and only 10 fewer calories than their cheeseburger or Egg McMuffin. Get the Truth: Always read nutrition labels and look up the ingredients and nutritional info when possible (readily available online when it comes to chain restaurants) before you chow down. The Lie: All Natural image via Ambro, freedigitalphotos.net main image, cupcake: karindalziel via flickr The Lie: Whole Grain.

Tell Naked Juice to Get Serious About Honest Labeling. A copy of your letter of support will be delivered to the the CEOs of Naked Juice and PepsiCo and a copy will also be given to the court on your behalf: Dear Naked Juice and PepsiCo, I urgently request that you remove the Mayo Clinic and local Legal Aid groups as the designated non-profit beneficiaries in the Naked Juice Class Action Lawsuit settlement (In re Naked Juice Cases) and replace them with Food Democracy Now!. 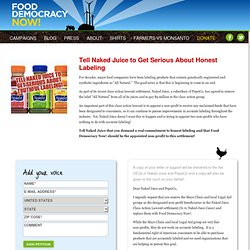 While the Mayo Clinic and local Legal Aid group are very fine non-profits, they do not work on accurate labeling. It is a fundamental right of American consumers to be able to purchase products that are accurately labeled and we need organizations that are helping us pursue this goal. Food Democracy Now! How Many Calories Do You See in This Pizza? - Part 2. Advertising the Worst Cereals to Kids. In 2006, the Children’s Food and Beverage Advertising Initiative (CFBAI) was formed by some of the largest food companies as a promise to change their ways through self-regulation. 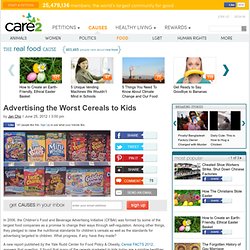 Among other things, they pledged to raise the nutritional standards for children’s cereals as well as the standards for advertising targeted to children. What progress, if any, have they made? A new report published by the Yale Rudd Center for Food Policy & Obesity, Cereal FACTS 2012, answers that question. What Gross Secret Ingredients are Hiding in Your Food? It’s a sad fact that, unless you’re cooking your meals at home from scratch, you can’t know exactly what’s in your food. 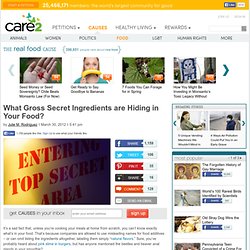 Food Labels Aren't Accurate (And That's Dangerous) For most people, packaged food is a welcome convenience. 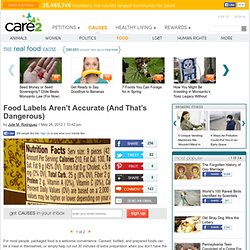 Canned, bottled, and prepared foods can be a meal in themselves, or simply help cut out 30 minutes of extra preparation when you don’t have the time to spare. Food Labels Lie. Nutella's Labels Make It Seem More Healthy Than It Is. It probably comes as no surprise to hear that Nutella, the chocolate and hazelnut spread that tastes more like frosting, chocolate sauce and all those things that aren’t exactly healthy, is not good for you. The labels on Nutella suggest that it contains high percentages of vitamins and minerals (40 and 78 percent) but a low percentage of fats and carbohydrates (7 and 3 percent). But German consumer advocates point out that the fat and carbohydrate content on Nutella’s labels is based on a 15-gram portion, while the vitamin and mineral content is based on a 100-gram portion.

In other words, to get the nutrition benefits of Nutella proclaimed on the label, you would have to eat a quarter of a jar of Nutella. Fruit Juices: Don't Let the "Pure" Label Fool You. Can you believe anything big corporations tell you these days…especially if it has to do with healthy, natural food? Recent media attention is shining a harsh light on the use of “pure” to describe beverages such as mass-produced, big-brand orange juices like Minute Maid, Tropicana, Simply Orange, and Florida’s Natural. It is probably not news to you that the processing part of these manufactured drinks removes most of the essential, healthy elements of the juice; however, did you know that the companies add artificial flavoring back into juice that has been de-oxygenated and stored for up to a year? Year-old juice with artificial flavor is not my idea of pure.

If you really want orange juice, consider making it yourself – it isn’t that hard, takes about a minute, and ultimately it is cheaper than buying cartons of low-quality orange drink. Fungicide Detected in Orange Juice Prompts FDA Testing. The fungicide carbendazim is used in Brazil but not approved to use on citrus in the US. After a yet unnamed company reported detecting low levels of carbendazim in its own orange juice and in its competitors,’ the FDA said that it will increase testing to ensure that contamination is not an issue. FDA official Nega Beru says that, because the FDA “doesn’t believe the levels of residue are harmful,” juice that is currently being sold in stores will not be recalled.

The industry has been asked to ensure that suppliers in Brazil and elsewhere do not use carbendazim, a chemical used to control fungi or fungal spores. Testing by the company detected levels up to 35 parts per billion of the fungicide in orange juice, says the FDA. This figure is still below the European Union’s maximum residue level of 200 parts per billion; the US has yet to establish a maximum residue level for carbendazim. Declining Orange Juice Consumption However, demand for orange juice has been declining.