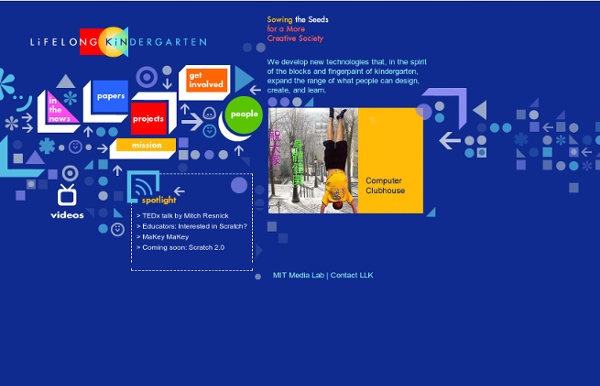 MIT Media Lab - Building The Media Lab has expanded into a new, six-floor structure with approximately 163,000 square feet of laboratory, office, and meeting space designed by the Tokyo-based architectural firm of Maki and Associates. Together with the existing Wiesner Building (designed by MIT alumnus I. M. Pei), the complex will serve as a showplace for new concepts in design, communications systems, and collaborative research. The goal is to ignite a new energy and connectivity within the two-building complex, and then extend this energy beyond our walls—to our sponsors and to the world at large.

KIWI - A robotics construction set for young children Since 2007, through generous funding by the National Science Foundation (NSF Grant No. DRL-1118897, DRL-0735657), the DevTech Research Group has been researching how to create a developmentally appropriate robotics construction set for young children in Pre-K through 2nd grade. The first prototype was called KIWI and consisted of intuitive, easy to connect construction materials including: wheels, motors, light output, and a variety of sensors (Sound, Light, and Distance sensors). KIWI is designed to work without any screentime using wooden programming blocks. The KIWI prototype paved the way to developing KIBO which is now commercially available through Kinderlab Robotics.

The Daring Dozen 2006: Our Heroes Twelve who are reshaping the future of education. Thousands of teachers, administrators, enterprising students, and other concerned thinkers are devoting themselves every day to finding creative ways to improve our schools. In an era of budget cuts and unprecedented challenges, there is no shortage of villains.

Oru Kayak: the origami folding boat by Oru Kayak "A marvel of compact choreography" —Fast Company THE ORU KAYAKThe Oru Kayak is an incredible, high-performance boat that folds out of a compact case. Inspired by origami, this innovative kayak transform quickly, easily— and almost magically.

The effects of computer use on creative thinking among kindergarten children in Jordan. The objective of the current study was to examine the effect of early computer experience, using quasi-experimental design, on creative thinking among Jordanian kindergarten children. It intended to answer two main research questions. First, does adding a computer to a kindergarten environment enhance children's creative thinking? Second, does children's creative thinking differ due to gender? Experimental group consists of (37) and the control groups consist Of (39) child. Udacity and the future of online universities The most exciting (but also, in a small way, slightly depressing) presentation at DLD this year came from Sebastian Thrun, of Stanford and Google. Or formerly of Stanford, anyway. Thrun told the story of his Introduction to Artificial Intelligence class, which ran from October to December last year.