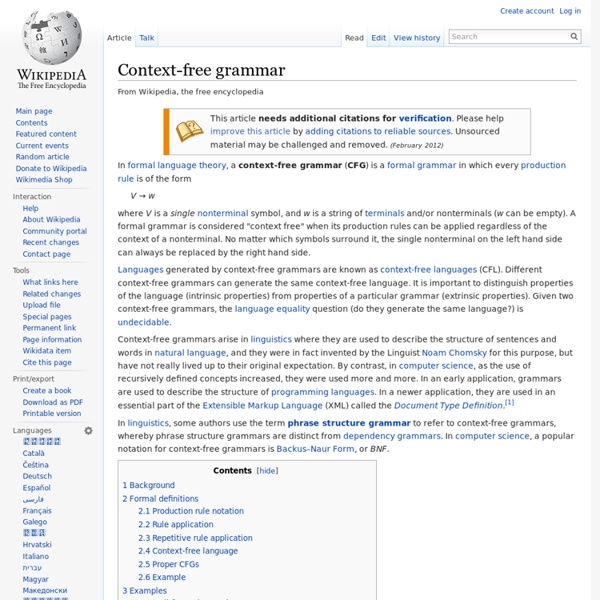 V → w where V is a single nonterminal symbol, and w is a string of terminals and/or nonterminals (w can be empty). A formal grammar is considered "context free" when its production rules can be applied regardless of the context of a nonterminal. No matter which symbols surround it, the single nonterminal on the left hand side can always be replaced by the right hand side. Context-free grammars arise in linguistics where they are used to describe the structure of sentences and words in natural language, and they were in fact invented by the Linguist Noam Chomsky for this purpose, but have not really lived up to their original expectation. By contrast, in computer science, as the use of recursively defined concepts increased, they were used more and more. In linguistics, some authors use the term phrase structure grammar to refer to context-free grammars, whereby phrase structure grammars are distinct from dependency grammars. Background[edit] can be logically parenthesized as follows: where

Computer science Computer science deals with the theoretical foundations of information and computation, together with practical techniques for the implementation and application of these foundations History[edit] The earliest foundations of what would become computer science predate the invention of the modern digital computer. Blaise Pascal designed and constructed the first working mechanical calculator, Pascal's calculator, in 1642.[3] In 1673 Gottfried Leibniz demonstrated a digital mechanical calculator, called the 'Stepped Reckoner'.[4] He may be considered the first computer scientist and information theorist, for, among other reasons, documenting the binary number system. Although many initially believed it was impossible that computers themselves could actually be a scientific field of study, in the late fifties it gradually became accepted among the greater academic population.[15][16] It is the now well-known IBM brand that formed part of the computer science revolution during this time. Misc

General Problem Solver While GPS solved simple problems such as the Towers of Hanoi that could be sufficiently formalized, it could not solve any real-world problems because search was easily lost in the combinatorial explosion of intermediate states. The user defined objects and operations that could be done on the objects, and GPS generated heuristics by Means-ends analysis in order to solve problems. It focused on the available operations, finding what inputs were acceptable and what outputs were generated. It then created subgoals to get closer and closer to the goal. References[edit] See also[edit] Web Ontology Language The OWL family contains many species, serializations, syntaxes and specifications with similar names. OWL and OWL2 are used to refer to the 2004 and 2009 specifications, respectively. Full species names will be used, including specification version (for example, OWL2 EL). When referring more generally, OWL Family will be used. History[edit] Early ontology languages[edit] Ontology languages for the web[edit] In 2000 in the United States, DARPA started development of DAML led by James Hendler.[12] In March 2001, the Joint EU/US Committee on Agent Markup Languages decided that DAML should be merged with OIL.[12] The EU/US ad hoc Joint Working Group on Agent Markup Languages was convened to develop DAML+OIL as a web ontology language. OWL started as a research-based[14] revision of DAML+OIL aimed at the semantic web. Semantic web standards[edit] The Semantic Web provides a common framework that allows data to be shared and reused across application, enterprise, and community boundaries.