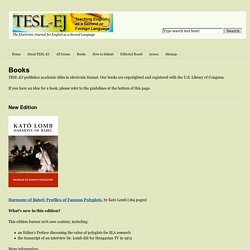 Our books are copyrighted and registered with the U.S. Library of Congress. If you have an idea for a book, please refer to the guidelines at the bottom of this page. New Edition Harmony of Babel: Profiles of Famous Polyglots, by Kató Lomb (264 pages) What’s new in this edition? This edition feature 20% new content, including: an Editor’s Preface discussing the value of polyglots for SLA researchthe transcript of an interview Dr. More information: In the late 1980s the distinguished interpreter and translator Kató Lomb profiled and interviewed 21 of her peers in search of answers to basic but deep questions on the nature of language learning. “When can we say we know a language?” The answers Lomb collected from her interlocutors are singular, provocative, and often profound. 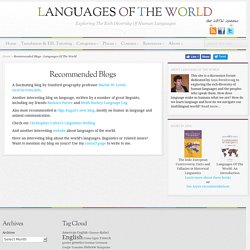 Lewis, GeoCurrents.info. Another interesting blog on language, written by a number of great linguists, including my friends Barbara Partee and Heidi Harley: Language Log Also most recommended is Olga Kagan’s new blog, mostly on humor in language and animal communication. Check out Christopher Culver’s Linguistics Weblog. Lapte batut - Translation into English - examples Romanian. These examples may contain rude words based on your search. 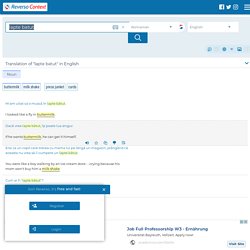 These examples may contain colloquial words based on your search. Wikiquote. Localingual: listen to the voices of the world. BookMooch: trade your books with other people. Can the Los Angeles We Know Survive the Death of Its Trees? Great Books Lists of Classic Texts from Western and Eastern Civilizations. Last updated: 12 April 2010 Great Books: Definition and BackgroundGreat Books in my own Education and in Polyliteracy The Standard Canon of Great BooksPrinciples for Expanding the Canon The Expanded Comprehensive Canon for Western Civilization The Twentieth Century Waiting List The Canon for Central (Middle Eastern) Civilization The Canon for Indic Civilization The Canon for (Far) Eastern Civilization Great Books: Definition and Background Lest any may have come to this page unacquainted with the term "great books," it is simply a contemporary equivalent for "the classics," i.e., a cover term for the best works of all time, especially as is applied to the notion of a complete, holistic, humanistic, liberal, well-rounded education, in which they are to be read and discussed in seminar format. 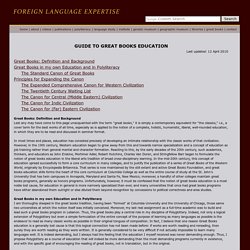 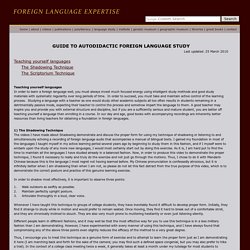 In order to succeed, you must take and maintain active control of the learning process. Studying a language with a teacher as one would study other academic subjects all too often results in students remaining in a detrimentally passive mode, expecting their teacher to control the process and somehow impart the language to them. A good teacher may inspire you and provide you with external structure and discipline, but if you are a sufficiently serious and mature student, you are better off teaching yourself a language than enrolling in a course. In order to shadow most effectively, it is important to observe three points: 1. 1. 1. News in Easy Spanish, for Spanish Learners - Hola qué pasa. Paralleltext.io. 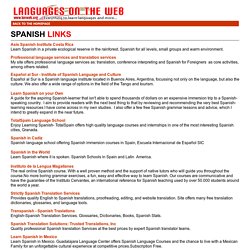 LANGUAGES ON THE WEB - THE ONE AND ONLY WEB SITE TO LEARN FOREIGN LANGUAGES ONLINE. Public Radio International. The Best Music from Around the World. The ASJP Database - Edge.org. Must Reads. Some Of The Best Nonfiction Books - James Altucher. 100 Good Books to Read: Book Recommendations by Topic. Blogs and resources. On ADS-L, Fred Shapiro posted: With the demise of the much-lamented “On Language” columns in the New York Times and Chicago Tribune [I think that modifier got displaced: “the much-lamented demise of the…”], what are remaining language columns in major newspapers or other media such as magazines, radio shows, or major blogs? 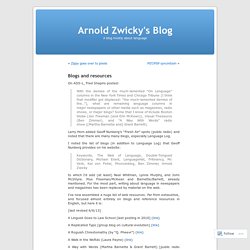 Some that I know of include Boston Globe (Jan Freeman [and Erin McKean]), Visual Thesaurus (Ben Zimmer), and “A Way With Words” radio show ([Martha Barnette and] Grant Barrett). Larry Horn added Geoff Nunberg’s “Fresh Air” spots (public radio) and noted that there are many many blogs, especially Language Log. I noted the list of blogs (in addition to Language Log) that Geoff Nunberg provides on his website: Keywords, The Web of Language, Double-Tongued Dictionary, Michael Erard, LanguageHat, Fritinancy, Mr. To which I’d add (at least) Neal Whitman, Lynne Murphy, and John McIntyre. I’ve now assembled a huge list of web resources. [last revised 6/6/13]