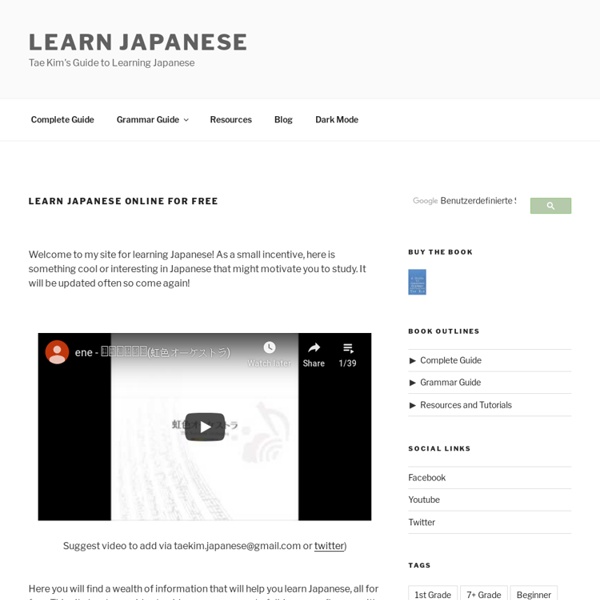 Ok, I'm not going to go into all the reasons why Japanese is such a fun and rewarding language to learn because you're already here and interested in learning it. If you're still undecided or afraid that it's too hard, don't be! It can be one of the easier languages to learn in ways that will surprise you. So here's what you need to do to teach yourself Japanese and how to do it by using this site. Learn Hiragana (the Japanese "alphabet")Learn vocabulary (with Kanji) and grammarPractice listening, speaking, reading, and writingLearn Katakana (the "alphabet" for foreign words)Learn how to use various tools such as online dictionariesRepeat steps 2 and 3 with progressively more advanced topics The ABCs of Japanese

Breaking into Japanese Literature As many of you know by now, being an intermediate student of Japanese can be really miserable. You know a chunk of basic grammar, you can understand everything in your textbooks, but the moment you step into the real world of reading Japanese, everything feels foreign again. If you are one of those people who wants to transition into reading Japanese literature in its original state, sometimes it feels like there is no way you will ever get there. Well, that isn't the case! Giles Murray's Breaking into Japanese Literature: Seven Modern Classics in Parallel Text is your big step into reading Japanese literature, real literature, the books your professors would assign you in English.

Middle East The Middle East[note 1] (also called the Mid East) is a eurocentric description of a transcontinental region centered on Western Asia and Egypt. The corresponding adjective is Middle-Eastern and the derived noun is Middle-Easterner. Formerly, the eurocentric synonym Near East (as opposed to Far East) was commonly used. Japanese language learning games Japanese games for language learning on Digital Dialects All Japanese games are free to use, do not require registration, and are suitable for kids and students of all ages. Games for learning Japanese language in HTML5 (work on current browsers) include Japanese phrases, Japanese numbers, animals quiz, basic vocabulary quiz, days and months in Japanese and a colors quiz. We also make Japanese games for moblies and tablets. Good luck in your language learning endeavours!

The Gay Gamer: A long-overdue update RE: my quest to learn Japanese All the way back in early January I mentioned--in this post--that I'd like to start learning Japanese this year. Well, it took me a good while, but I finally started learning hiragana--one of the language's three syllabaries, along with katakana and kanji--just under two weeks ago. In fact, as of Thursday I've memorized all 46 "basic" hiragana characters that can be seen in the chart below as well as the "functional marks" that are used to modify a handful of them. With that out of the way, though, I'm not entirely sure what to do next.

Japanese Slang Last updated: 8 July 2013 Find a list a common Japanese slang expressions and patois below. Most of these phrases are used extensively in daily life. 10 Recommended Resources for Learning Japanese Whether you want to learn Japanese without enrolling in a language school, or you want to supplement your Japanese lessons, there’s no shortage of learning resources for you, and here are some of them. Keep in mind, though, that since some of these resources work best as supplementary review material, it’s best to use a combination of materials for those planning to study Japanese on their own. Of course, there’s no one surefire way to learn Japanese (different strokes for different folks, after all), but we’ve also got some tips on how to improve your Japanese. Good luck, and happy learning! First, here are some digital resources: 1. 80/20 Japanese

Western Asia Western Asia, West Asia, Southwestern Asia or Southwest Asia is the westernmost subregion of Asia. The concept is in limited use, as it significantly overlaps with the Middle East (or the Near East), the main difference usually being the exclusion of the majority of Egypt (which would be counted as part of North Africa) and the inclusion of the Caucasus. The term is sometimes used for the purposes of grouping countries in statistics. Japanese Lessons - Ramblings of DarkMirage Introduction So, one day I was feeling bored and I decided to start a series of Japanese lessons targeted at the anime fans. These lessons are not meant to actually teach the language, but rather to give you a better understanding of how Japanese works and the various headaches faced by translators when they work on your favourite shows every week.

The Expat's Guide to Japan Once you get used to the overcrowding, get to know which lines intersect at which stations, and which lines are operated by which companies, Tokyo’s rail network is not so difficult to navigate. Still, there are a few tips and tricks that even veterans can make use off to save time, money and stress on the world’s busiest public transport system. 1. Near East The Near East is a geographical term that roughly encompasses Western Asia. Despite having varying definitions within different academic circles, the term was originally applied to the maximum extent of the Ottoman Empire. The term has fallen into disuse in English and has been replaced by the terms "Middle East" and "West Asia", the former of which may include Egypt, and the latter strictly Southwest Asia including the Transcaucasus.