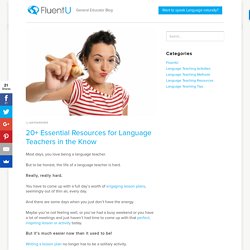 But to be honest, the life of a language teacher is hard. Really, really hard. You have to come up with a full day’s worth of engaging lesson plans, seemingly out of thin air, every day. And there are some days when you just don’t have the energy. Maybe you’re not feeling well, or you’ve had a busy weekend or you have a lot of meetings and just haven’t had time to come up with that perfect, inspiring lesson or activity today. But it’s much easier now than it used to be! Writing a lesson plan no longer has to be a solitary activity. With so many digital resources, authentic materials and online communities available out there, the possibilities are endless. The hardest part is sorting through them all to see what works for you. We’ve gone ahead and done some of that work for you.

So grab a pencil (or just bookmark this page!). Websites IElanguages. Lesson Planet. Publications Communities Learning Apps. Language Difficulty Ranking. Georgian, like the other Caucasian languages, is one of the most difficult languages in the world. 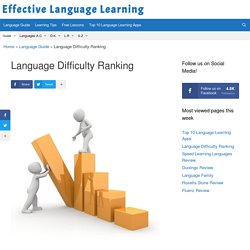 It has a different alphabet, pronunciation is really tough and the Georgian verb is a nightmare: “The Georgian verb is relatively complex. If we compare it to that of many of the more familiar languages – such as English, Spanish, French, and the like – we notice a number of significant differences. Localingual: listen to the voices of the world. A Map of Languages. Locallingual is an interactive map of languages and dialects around the world. 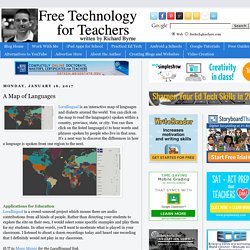 You can click on the map to read the language(s) spoken within a country, province, state, or city. You can then click on the listed language(s) to hear words and phrases spoken by people who live in that area. It's a neat way to discover the differences in how a language is spoken from one region to the next. Applications for EducationLocallingual is a crowd-sourced project which means there are audio contributions from all kinds of people. Rather than directing your students to explore the site on their own, I would select some specific examples and play them for my students. What is a Glossika triangulation package? Over the last couple months (end of 2016) we've received a large number of orders for just triangulation packages. 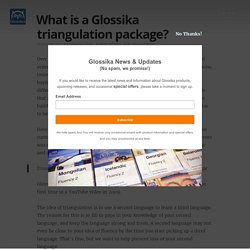 And in some very strange combinations. Unless you are Ariel Diaz (a hyperglot power user), I cannot imagine you buying English > Armenian > Hakka > Swahili > Thai (all from completely different language families). I don't know how you can process an audio file that goes through all of these languages at the same time (which is how we build these products). You're probably superhuman, or an alien, or Ariel Diaz to be able to handle it. (Yes, Ariel amazes me) Here at Glossika we manually build triangulation packages according to your custom requirements. Rosnący Słownik Hebrajski. Learn These Words First. 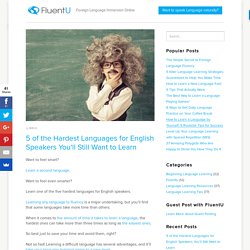 Learn a second language. Want to feel even smarter? Learn one of the five hardest languages for English speakers. Learning any language to fluency is a major undertaking, but you’ll find that some languages take more time than others. When it comes to the amount of time it takes to learn a language, the hardest ones can take more than three times as long as the easiest ones. So best just to save your time and avoid them, right? Not so fast! List of Language and Linguistics Resources. Humans Who Read Grammars: A Global Tree of Languages.

I find this tree exciting because geographical patterns emerge purely out of comparing lists of words in different languages. 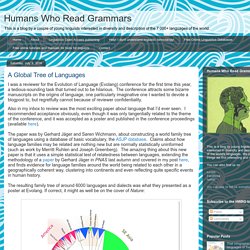 The four lists of words below, for example, do not seem to have much in common, but somehow the algorithm manages to correctly place A and B in Papua New Guinea, and C and D in South America. (The languages are Yabiyufa, Dubu, Nadeb and Kukua). I: nemo no u*h we*b one: makoko k3rowali SEt bik blood: oladala t3ri yuw be*p fish: lahava ambla hu*b keh skin: upala ser buh baka7 Co The way that the algorithm works is to calculate the distance between two word lists, namely how different two languages are. Slang angielski - Szlifuj swój angielski. Duke University Slavic Centers : Reference Grammars. This set of reference grammars has been designed for advanced-level language users and linguists to compare semantic categories across languages. 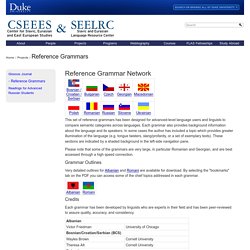 Each grammar also provides background information about the language and its speakers. In some cases the author has included a topic which provides greater illumination of the language (e.g. tongue twisters, slang/profanity, or a set of exemplary texts). These sections are indicated by a shaded background in the left-side navigation pane. Please note that some of the grammars are very large, in particular Romanian and Georgian, and are best accessed through a high speed connection. Grammar Outlines Very detailed outlines for Albanian and Romani are available for download. Credits Each grammar has been developed by linguists who are experts in their field and has been peer-reviewed to assure quality, accuracy, and consistency.

Comparing grammars: The user interface features a list of linguistic categories in the left-side navigation pane. LANGUAGES ON THE WEB - THE ONE AND ONLY WEB SITE TO LEARN FOREIGN LANGUAGES ONLINE. Writing Against the Clock: 5 Tips For Writing When You Have No Time.

Before I had my son, I often felt like I was just a child pretending to be an adult. 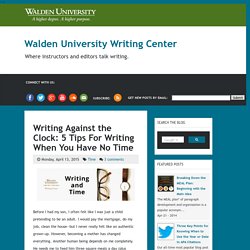 I would pay the mortgage, do my job, clean the house—but I never really felt like an authentic grown-up. However, becoming a mother has changed everything. Another human being depends on me completely. He needs me to feed him three square meals a day (plus snacks), ensure he is entertained, comfort him when he is hurting, and make him feel loved and supported each minute of his life. In addition to navigating the demands of caring for a child, I am still responsible for working 40+ hours a week, teaching writing courses, keeping the house clean (or at least presentable), and working to maintain some level of personal fitness. In my current life, the answer seems so simple—responsibility is what makes a grown-up. To help combat the stress of busy schedules and last-minute writing, I’d like to offer you five important tips that have helped me keep writing when I have no time. 1. 2. 3. 4. 5. 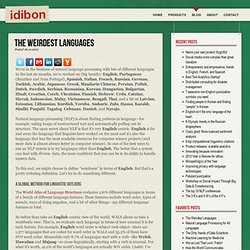