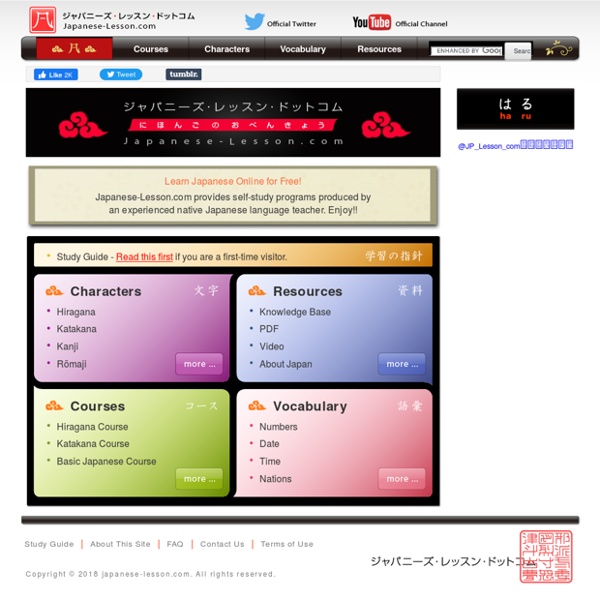 rikaichan About Rikaichan is a popup Japanese-English/German/French/Russian dictionary tool for Firefox, Thunderbird and Seamonkey. Features Simple to use, just hover the mouse on top of a Japanese word. Automatically de-inflects verbs and adjectives. 100 Free Foreign Language Classes Online March 1st, 2010 If you have always wanted to learn a language but were too put off by the high cost associated with most classes, then take a look at all these great opportunities to learn a foreign language online, at no cost to you. With so many learning opportunities online, it is a shame not to take advantage of all that you can, so be sure to spend some time with these classes.

Japanese Stories Go to Tom Ray's home page. Go to the Tierra home page. I have translated these texts as my own way of studying Japanese. The Best Sites for Learning Japanese - Nihongo Shark - Japanese Lessons Yo, I'm Niko. I translate Japanese to English. I also vagabond about the world with this fierce Asian princess: This site is all about finding... The most effective (non-boring) methods for studying Japanese. Topic Modifiers: Object Markers を (‘direct object marker’) 「を」 is used with verbs that express action and indicates that N is the object of the action. Examples: Japanese Kanji to Romaji Converter. Furigana. Pitch Accent. Paste Japanese text here: Phonetic transcription of Japanese text (furigana, kana, romaji or IPA): No Japanese text submitted Phonetic Transcription of Japanese Words – Furigana, Romaji and Pitch Accent Japanese phonetics may seem easy for people who are starting to learn Japanese.

Learn 46 Languages Online for Free Advertisement Get FREE Audio Books from Audible.com and Audiobooks.com How to learn languages for free? Language What kind of language is Japanese? In this section you can take Japanese lessons and try speaking the language. You can also learn the characters used to write Japanese. Why not do the lessons with a friend and try speaking Japanese to each other? Learning Hiragana - Yoshida Institute Learning the two Japanese phonetic alphabets, hiragana and katakana, are key to learning basic Japanese. Each hiragana character represents a single vowel or consonant-vowel sound. In the chart below you can see all of the basic hiragana characters along with the closest sounding roman letters. The five vowel sounds, a (ah), i (ee), u (oo), e (eh), o (oh), are combined with the consonant sounds k, s, t, n, h, m, y, r, w to produce almost all the sounds represented by hiragana characters. The consonant-only n character appears at the end of words. These characters were all originally written with a brush, so writing the strokes of a hiragana character in the right order is important in getting the shape of the character correct.

20 Common Grammar Mistakes That (Almost) Everyone Makes I’ve edited a monthly magazine for more than six years, and it’s a job that’s come with more frustration than reward. If there’s one thing I am grateful for — and it sure isn’t the pay — it’s that my work has allowed endless time to hone my craft to Louis Skolnick levels of grammar geekery. As someone who slings red ink for a living, let me tell you: grammar is an ultra-micro component in the larger picture; it lies somewhere in the final steps of the editing trail; and as such it’s an overrated quasi-irrelevancy in the creative process, perpetuated into importance primarily by bitter nerds who accumulate tweed jackets and crippling inferiority complexes.

Japanese Tips I set about learning Japanese the hard way--with a stack of manga and novels and two dictionaries. Taking a language course would have been helpful, but as a graduate student in a completely unrelated field, I had neither the time nor the money for extra classes. This is not necessarily a page for those already studying Japanese in school, for I'm sure your instructors are much better resources. Rather, this is for those who simply want to read Japanese as a hobby or in preparation for future study. This guide does not cover basic rules or vocabulary that can be found in introductory texts available at most bookstores, such as conjugating verbs into the past tense or the difference between i- and na-adjectives.