How to raise a genius: lessons from a 45-year study of super-smart children. Illustration by Vasava On a summer day in 1968, professor Julian Stanley met a brilliant but bored 12-year-old named Joseph Bates. 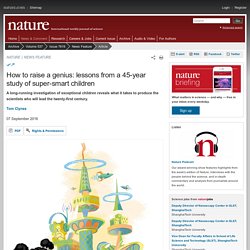 The Baltimore student was so far ahead of his classmates in mathematics that his parents had arranged for him to take a computer-science course at Johns Hopkins University, where Stanley taught. Even that wasn't enough. Having leapfrogged ahead of the adults in the class, the child kept himself busy by teaching the FORTRAN programming language to graduate students. Unsure of what to do with Bates, his computer instructor introduced him to Stanley, a researcher well known for his work in psychometrics — the study of cognitive performance.

Bates's score was well above the threshold for admission to Johns Hopkins, and prompted Stanley to search for a local high school that would let the child take advanced mathematics and science classes. Source: K. Super-Intelligent Humans Are Coming - Issue 34: Adaptation. Lev Landau, a Nobelist and one of the fathers of a great school of Soviet physics, had a logarithmic scale for ranking theorists, from 1 to 5. 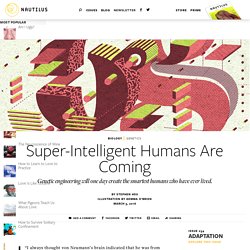 A physicist in the first class had ten times the impact of someone in the second class, and so on. He modestly ranked himself as 2.5 until late in life, when he became a 2. In the first class were Heisenberg, Bohr, and Dirac among a few others. Einstein was a 0.5! My friends in the humanities, or other areas of science like biology, are astonished and disturbed that physicists and mathematicians (substitute the polymathic von Neumann for Einstein) might think in this essentially hierarchical way. I have even come to believe that Landau’s scale could, in principle, be extended well below Einstein’s 0.5. In Daniel Keyes’ novel Flowers for Algernon, a mentally challenged adult called Charlie Gordon receives an experimental treatment to raise his IQ from 60 to somewhere in the neighborhood of 200.

Does g predict genius? References. Daniel Tammet: Different ways of knowing. From head injury to math genius: On savant syndrome and the possibility of a ‘little Rain Man within us all’ Being knocked unconscious might change any one of us. 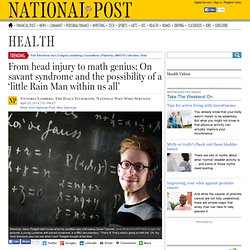 It might affect us physically, causing double vision or headaches, or mentally, making us fearful or even grumpy. But few could dream of the altered state Jason Padgett found himself in, after just such an injury — caused in his case by a blow to the head during a late-night mugging outside a karaoke bar in 2002. Daniel Tammet - The Boy With The Incredible Brain [1/5] School & Experts Put Genius Boy In Special Ed. Now He’s Free & On Track For Nobel Prize. A young genius whose IQ is said said to be higher than Albert Einstein, is on his way to possibly winning a Nobel Prize after dropping out of elementary school and his special ed programs. 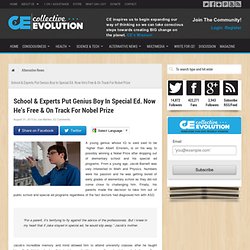 From a young age, Jacob Barnett was very interested in Math and Physics. Numbers were his passion and he was getting bored of early grades of elementary school as they did not come close to challenging him. Finally, his parents made the decision to take him out of public school and special ed programs regardless of the fact doctors had diagnosed him with ASD. “For a parent, it’s terrifying to fly against the advice of the professionals. But I knew in my heart that if Jake stayed in special ed, he would slip away.” Jacob Barnett is currently studying at Perimeter Institute for Theoretical Physics in Waterloo, ON where he and his family now live.[1] This is just another example of how society can often leave kids behind who don’t fit the ‘mould’ of ‘every other child.’ Source: 12-year-old music prodigy. Artist Akiane: Spiritual Child Prodigy. Beautiful Minds: Stephen Wiltshire. If You Think You’re a Genius, You’re Crazy - Issue 18: Genius.

When John Forbes Nash, the Nobel Prize-winning mathematician, schizophrenic, and paranoid delusional, was asked how he could believe that space aliens had recruited him to save the world, he gave a simple response. 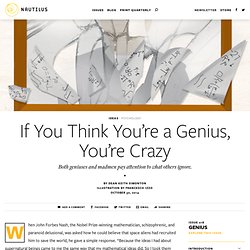 “Because the ideas I had about supernatural beings came to me the same way that my mathematical ideas did. So I took them seriously.” Nash is hardly the only so-called mad genius in history. Suicide victims like painters Vincent Van Gogh and Mark Rothko, novelists Virginia Woolf and Ernest Hemingway, and poets Anne Sexton and Sylvia Plath all offer prime examples. Even ignoring those great creators who did not kill themselves in a fit of deep depression, it remains easy to list persons who endured well-documented psychopathology, including the composer Robert Schumann, the poet Emily Dickinson, and Nash.

Instances such as these have led many to suppose that creativity and psychopathology are intimately related. References 1. 2. 3. 4. 5. 6. Super-Intelligent Humans Are Coming - Issue 18: Genius.