Les plages les plus étranges du monde : 30 plages étranges. Mondo Earth. Soco Loco. Ways Places Means. The top 10 stargazing sites in the world. 20 Places To Go Camping Before You Die. Comes and Goes. Netherlands. The Netherlands ( i/ˈnɛðərləndz/; Dutch: Nederland [ˈneːdərˌlɑnt] ( )) is a constituent country of the Kingdom of the Netherlands, consisting of twelve provinces in western Europe and three islands in the Caribbean. 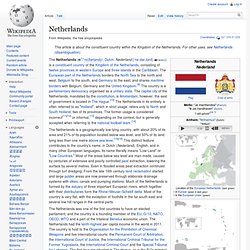 The European part of the Netherlands borders the North Sea to the north and west, Belgium to the south, and Germany to the east; and shares maritime borders with Belgium, Germany and the United Kingdom.[9] The country is a parliamentary democracy organised as a unitary state. The capital city of the Netherlands, mandated by the constitution, is Amsterdam, however, the seat of government is located in The Hague.[10] The Netherlands in its entirety is often referred to as "Holland", which in strict usage, refers only to North and South Holland, two of its provinces. The former usage is considered incorrect[11][12] or informal,[13] depending on the context, but is generally accepted when referring to the national football team.[14] History[edit] Dutch Republic (1581–1795)[edit] San Serriffe (1977) On April 1, 1977 the British newspaper The Guardian published a seven-page "special report" about San Serriffe, a small republic located in the Indian Ocean consisting of several semi-colon-shaped islands. 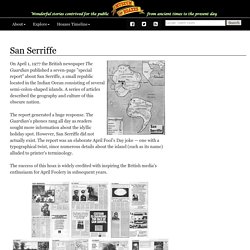 A series of articles described the geography and culture of this obscure nation. The report generated a huge response. The Guardian's phones rang all day as readers sought more information about the idyllic holiday spot. However, San Serriffe did not actually exist. The report was an elaborate April Fool's Day joke — one with a typographical twist, since numerous details about the island (such as its name) alluded to printer's terminology. Maybe Someday. Shortage of Rare Earth Elements. Should You Sell Your Car At Carmax? - The Truth About Cars. 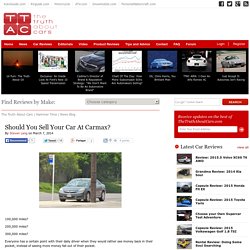 200,000 miles? 300,000 miles? Everyone has a certain point with their daily driver when they would rather see money back in their pocket, instead of seeing more money fall out of their pocket. Time marches on. That old clunker loses it’s endearing qualities and then, what do you do? Well, the answer depends a lot on what type of vehicle you’re trying to sell… which is why I’m introducing Carmax’s wholesale operations into this write-up. A lot of us are already familiar with Carmax’s retail operation. No-haggle pricing. Like em’ or hate em’, Carmax is now the official used car Goliath of the auto industry. This article from Automotive News does a great job of highlighting the retail side of their success. That first billion is the one everyone here is already familiar with. This is how it works. You are tired of your car.

Enter Carmax. It’s arbitrage, with a churn that now numbers close to 7,000 vehicles. Every… single.. week… Carmax inspects your vehicle. What types? Welcome to the World Café! Détours: Poétiques de la ville. The Best Global Development Quotes of 2012. World of Waterfalls: Explore the best of YOUR World one waterfall at a time! Fantastical Places around the world where you can live in a cave. Staceythinx: You may have seen MRK’s... It is the capital of an empire that extended into present-day Peru and Chile, flourishing from AD 300 to AD 1000. Tiwanaku is recognized by Andean scholars as one of the most important civilizations prior to the Inca Empire; it was the ritual and administrative capital of a major state power for approximately five hundred years. The ruins of the ancient city state are near the south-eastern shore of Lake Titicaca in the La Paz Department, Ingavi Province, Tiwanaku Municipality, about 72 km (45 mi) west of La Paz.

The site was first recorded in written history by Spanish conquistador Pedro Cieza de León. Cultural development and agriculture[edit] Artificially raised planting mounds are separated by shallow canals filled with water. Saharasia: The Origins of Patriarchal Authoritarian Culture in Ancient Desertification. The Silk Road. Geocaching. The Ghoul-Haunted Woodland of Weir. Here it is, folks, the Halloween cache too scary for geocaching.com. 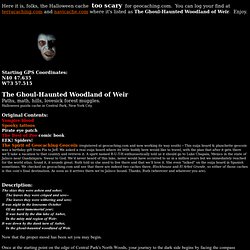