There’s more to the Skybox satellite than meets the eye. Much more. In January 2011, Fred Villagomez, the head mechanical technician at a Mountain View-based satellite imaging startup, drove east, looping down and around the San Francisco Bay toward Fremont. 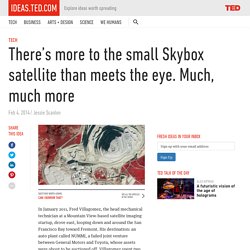 His destination: an auto plant called NUMMI, a failed joint venture between General Motors and Toyota, whose assets were about to be auctioned off. Villagomez spent two days walking around the plant, making bids on milling machines, lathes, hand tools. “We got almost all of the equipment we needed to build a lean satellite manufacturing facility — at fire-sale prices,” recalls Skybox Imaging co-founder and chief product officer Dan Berkenstock.

Three Feminist Geniuses Just Invented a Pair of Panties That Could Change the World. Menstruation is a natural part of life, but it has long been and continues to be stigmatized. 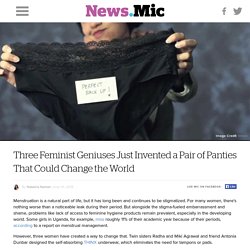 For many women, there's nothing worse than a noticeable leak during their period. But alongside the stigma-fueled embarrassment and shame, problems like lack of access to feminine hygiene products remain prevalent, especially in the developing world. Some girls in Uganda, for example, miss roughly 11% of their academic year because of their periods, according to a report on menstrual management. However, three women have created a way to change that. Meet the Man Who Transforms Corpses into Diamonds. 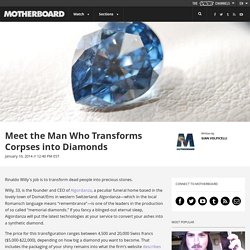 Willy, 33, is the founder and CEO of Algordanza, a peculiar funeral home based in the lovely town of Domat/Ems in western Switzerland. Algordanza—which in the local Romansch language means “remembrance”—is one of the leaders in the production of so called “memorial diamonds.” If you fancy a blinged-out eternal sleep, Algordanza will put the latest technologies at your service to convert your ashes into a synthetic diamond. The price for this transfiguration ranges between 4,500 and 20,000 Swiss francs ($5,000-$22,000), depending on how big a diamond you want to become. The Cyborg Who Can 'Hear' What Other People Are Looking At. Being recognised as one of the world’s first cyborgs is pretty cool, but now that cybernetics are getting more common and everyone’s starting to stick technology on their bodies through wearables or DIY implants, it takes constant innovation to stay ahead of the curve. 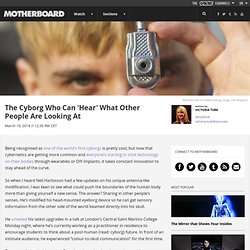 So when I heard Neil Harbisson had a few updates on his unique antenna-like modification, I was keen to see what could push the boundaries of the human body more than giving yourself a new sense. The answer? Teen Invents Flashlight That Could Change The World. Ann Makosinski was just another teenager with another science project when she joined her local science fair in Victoria, Canada, last year. 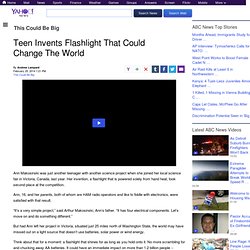 Her invention, a flashlight that is powered solely from hand heat, took second place at the competition. Ann, 16, and her parents, both of whom are HAM radio operators and like to fiddle with electronics, were satisfied with that result. With Anki, Toy Cars Cruise Into the New Age of Robotics – AllThingsD. Anki is the Christmas gift you’ll buy for your kids and then steal for yourself. 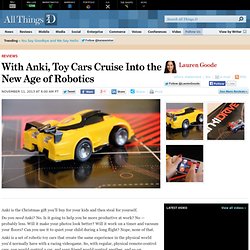 Do you need Anki? No. Is it going to help you be more productive at work? No — probably less. The Genius Who Plays For A Living. Just before he was old enough to vote but after he'd begun a doctorate in computer science, Erik Demaine arrived in New York City for the annual OrigamiUSA convention. 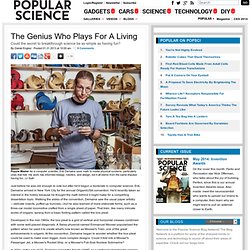 He'd recently taken an interest in the hobby because he thought the math behind it might make for a compelling dissertation topic. Walking the aisles of the convention, Demaine saw the usual paper artistry—delicate insects, puffed-up bunnies—but he also learned of more elaborate forms, such as a three-car model locomotive crafted from a single sheet of paper. That train, like many intricate works of origami, sprang from a basic folding pattern called the box pleat. Developed in the mid-1960s, the box pleat is a grid of vertical and horizontal creases combined with some well-placed diagonals. High School Inventors 2011. In between pep rallies and history tests, these 10 brainy students are refining cancer treatments, cleaning up car exhaust systems, and improving communication between humans and robots. 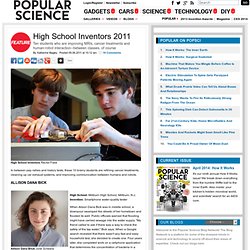 High School: Millburn High School, Millburn, N.J.Invention: Smartphone water-quality tester When Alison Dana Bick was in middle school, a downpour swamped the streets of her hometown and flooded its well. Public officials warned that flooding might have carried sewage into the water supply. "My friend called to ask if there was a way to check the safety of the tap water," Bick says. When a Google search revealed that there wasn't any fast and easy household test, she decided to create one.

College: Bick starts her freshman year at Princeton University this fall. 13-Year-Old Designs Super-Efficient Solar Array Based on the Fibonacci Sequence. Plenty of us head into the woods to find inspiration. 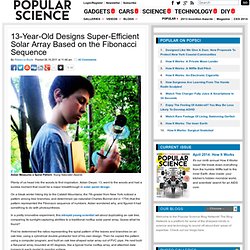 Aidan Dwyer, 13, went to the woods and had a eureka moment that could be a major breakthrough in solar panel design.