Calendars Through The Ages 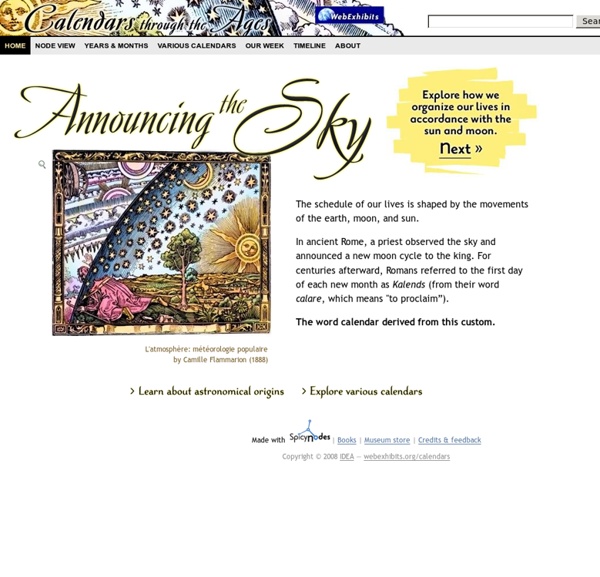 Council of Vienne 1311-1312 A.D. re Unum Sanctum 1302 v Magna Carta 1215 In 1301 King Philip had a French bishop tried for treason and imprisoned. This was intolerable and Boniface issued a reproving bull, which in 1302 was decisively rejected by the Estates General, even the French clergy supporting their king. Boniface announced that he would depose Philip if need be and issued the bull Unam Sanctam('One Holy'),the most famous papal document of the Middle Ages, affirming the authority of the pope as the heir of Peter and Vicar of Christ over all human authorities, spiritual and temporal. Spiritual power, according to the bull, rests in the hands of the Church.

Building a Celtic Roundhouse The walls of roundhouses were either dry stone filled in with clay and straw, or a ring of support poles weaved with wattling and plastered in daub, or a mixture of both stone and wattling as being built here (left). Wattle and daub is one of the oldest building techniques dating back to the Bronze Age and beyond. Wattling is a way to build walls by weaving long flexible sticks in and out of upright posts. Hazel, which is pliable and grows naturally long, is a good species to use for wattle.

Spreading The Word: Rome WAS built in a day A kingdom of ideas Once upon a time there was a city called Rome. For five centuries it was a republic and much more beautiful, for it was run by the people who got along nicely. And then one day it became a kingdom of ideas, when a family came along from nowhere. They were the Julian family with Julius Caesar and his adopted nephew Augustus, and then the Piso family, who were the Flavians. And the days came when blood filled the streets of Rome that Tacitus recalled as the days of horror.

Tiny Wind & Solar Powered Home Lets You Live Off The Grid Anywhere In The World Ecocapsules, designed by Bratislava-based Nice Architects, promise to let anyone live off the grid for up to a year. Each unit is equipped with solar panels, a retractable wind-turbine, and a design that captures rain water. Inside, you’ll find a kitchenette with running water, a flushing toilet, and hot shower. The Ecocapsule “is suitable for a wide range of applications,” write the designers, such as an “independent research station or a tourist lodge to an emergency housing or a humanitarian-action unit.” Those interested in buying one will be able to pre-order at the end of 2015, with delivery in the first half of 2016.

How Words Can Be Used as Magic Spells How Words Can Be Used as Magic Spells Words are not just elements of speech or writing, because they can be used to strengthen the effects of magic, which is the art of directing and controlling energy. When spoken out loud, words transform into frequencies and vibrations that can be used to direct energy. This is one of the first steps to creating magic effects. Most people will laugh at the idea of magic being real, but if only they knew what magic really is and how magic is being used to control them, they would not be laughing.

How Whole Turmeric Heals The Damaged Brain Long considered impossible to accomplish, new research reveals how a simple spice might contribute to the regeneration of the damaged brain. Turmeric is hands down one of the, if not the, most versatile healing spice in the world with over 600 experimentally confirmed health benefits, and an ancient history filled with deep reverence for its seemingly compassionate power to alleviate human suffering. But, most of the focus over the past decade has been centered on only one of its many hundreds of phytocompounds: namely, the primary polyphenol in turmeric known as curcumin which gives the spice its richly golden hue. This curcumin-centric focus has lead to the development of some very good products, such as phospholipid bound curcumin concentrate (e.g. Meriva, BCM-95) which greatly helps to increase the absorption and bio-activity of curcumin. Truth be told, there is no singular ‘magic bullet’ in foods and herbs responsible for reproducing the whole plant’s healing power.

Revelation of the Method, Predictive Programming and the Prime Directive Zen Gardner, GuestWaking Times These are big subjects and well worth investigation. Knowing the mechanics of the matrix we find ourselves in is extremely empowering and liberating. There’s a saying, “If you’re not wondering if you’re under mind control, you probably are.” Sugar Harms Your Brain Health, Drives Alzheimer’s Epidemic By Dr. Joseph Mercola Guest Writer for Wake Up World Alzheimer’s disease, a severe form of dementia, affects an estimated 5.2 million Americans, according to 2013 statistics.[1] One in nine seniors over the age of 65 has Alzheimer’s, and the disease is now thought to be the third leading cause of death in the US, right behind heart disease and cancer. A growing body of research suggests there’s a powerful connection between your diet and your risk of developing Alzheimer’s disease, via similar pathways that cause type 2 diabetes.

The Chaining of Saturn/Sol « Author Elva Thompson In the beginning was the Golden Age, when men of their own accord, without threat of punishment, without laws, maintained good faith and did what was right….The earth itself, without compulsion, untouched by the hoe, unfurrowed by any share, produced all things spontaneously….it was a season of everlasting spring. Ovid in the sixth book of his Metamorphoses. The Golden Age of Sol/Saturn Exploring the Superconscious Interview with Dr Edward Bynum, author of Dark Light Consciousness Author: Jair Robles We are all familiar with its symbolic representations, be it from the caduceus used by modern medicine, the winged serpent of Prehispanic Mesoamerican cultures or the dragons commonly seen at most Asian celebrations. It is said to represent a dormant energy that lies within every one of us, at the base of the spine, and that when this energy is awakened and driven into the brain it opens up our access to higher states of consciousness and our connection to the divine. Much of the disciplines and practices developed by the ancient traditions and practiced at the mystery schools were geared to this sole purpose. It is refreshing and exciting to find that current scientists and scholars, such as Dr Edward Bynum, are making an effort to bring this knowledge back for the scrutiny and study of modern science.

Soul-Catching Net — Are We “Recycled” at Death to Remain in the Matrix? 23rd July 2015 By Makia Freeman Contributing Writer for Wake Up World In the Shadow of Hegel: How Does Thought Arise Out of Matter? What's the Big Idea? Before neuroscience and quantum physics, there was Georg Wilhelm Friedrich Hegel. The 19th century German idealist revolutionized Western thought, and every great thinker since has been working in his shadow, says Slavoj Žižek, the Slovenian philosopher and cultural critic. Watch the video interview: Often seen as a precursor to Marxists and existentialists, Hegel believed that knowledge is not static, but dynamic. In the Hegelian framework, history is a process in which many paradoxes interact and are then synthesized into a unified whole.