Extreme Hacks: 13 Awesome Xbox Mods. Thinking outside the box, modders create Xbox 360s that are as cool on the outside as gaming system is on the inside. 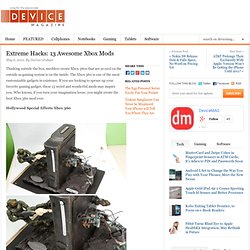 The Xbox 360 is one of the most customizable gadgets in existence. If you are looking to spruce up your favorite gaming gadget, these 13 weird and wonderful mods may inspire you. Who knows, if you turn your imagination loose, you might create the best Xbox 360 mod ever. Hollywood Special Effects Xbox 360 (image source: kotaku) Master Chief is blowing the guts out of this console. Swarovski Crystals Studded Xbox 360 (image source: SlipperyBrick) With enough bling to blind you, this Swarovski crystal-studded Xbox 360 was also created for the Microsoft Australia auction. 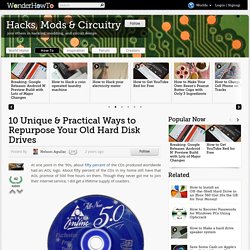 About fifty percent of the CDs in my home still have that AOL promise of 500 free hours on them. Though they never got me to join their internet service, I did get a lifetime supply of coasters. Thanks to the rise of high-speed internet access and bigger and better hard drives, there's no reason for companies to snail mail any more of those obnoxious plastic discs.

However, cloud storage is threatening to make your hard disk drives at home a thing of the past, too. So, what can you do with all of those internal and external HDDs filling up your house? Hard Drive Desk Clock One of the most popular ways to reuse an HDD is to turn it into a clock. Image via instructables.com Want a different twist? Get creative. Repurpose Old Video Game Consoles and Controllers. Raspberry Pi Sega Mega Drive/Genesis II Case. I received my Raspberry Pi and decided I needed a case. 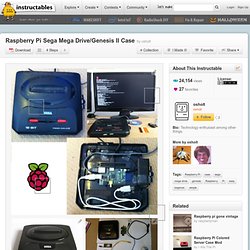 I didn't have much available to me in terms of laser cutters, 3D printers or woodwork skills etc. so I thought laterally. I'd previously had the idea of using the Pi as an emulator so I thought, "why wouldn't a Pi fit in a Mega Drive case? ". About an hour and half later of taking my old Mega Drive II apart and thinking about the best ways of keeping everything tied down I had a very neat case for my Pi with (sort of) integrated USB hub. For this Instructable you will need: A Raspberry Pi with SD card inserted and OS installed (if you want to be pre-emptive with your case a credit card will help you see how it all goes together in place of the Pi), A Sega Mega Drive/Genesis II (See the second picture if you're unsure which version you have), A screwdriver that can undo all of the screws on the console (they're all the same size), Some sticky tape, A micro USB cable and power adapter for your Pi, (Optional) Ethernet Cable.

Ten Ways to Give Old Gadgets a New Lease on Life. Didn’t get the tablet you wanted for the holidays? 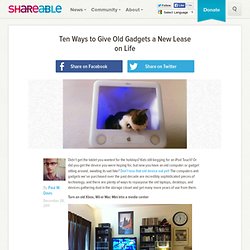 Kids still begging for an iPod Touch? Or did you get the device you were hoping for, but now you have an old computer or gadget sitting around, awaiting its sad fate? Don’t toss that old device out yet! The computers and gadgets we’ve purchased over the past decade are incredibly sophisticated pieces of technology, and there are plenty of ways to repurpose the old laptops, desktops, and devices gathering dust in the storage closet and get many more years of use from them. Turn an old Xbox, Wii or Mac Mini into a media center Photo by Joe Bustillios on Flickr. If you’re streaming Netflix, watching a lot of downloaded movies, or a voracious podcast listener, you may covet a shiny new Apple TV, Roku box, or Xbox 360. Upgrade a Netbook with Chromium OS or Mac OS X Photo by Raj Deut on Flickr.

Inspired by the svelte MacBook Air, ultra-portable notebook computers are all the rage. Make an old computer run like new. Chromium OS. Reclaim the wireless controller module from a broken Xbox 360. If you’re one of the hordes whose Xbox 360 died the fiery death associated with the RRoD you may be wondering what to do with that multi-hundred dollar door stop you’re left with. 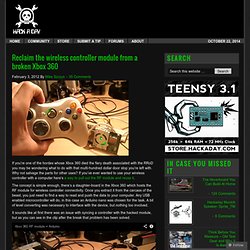 Why not salvage the parts for other uses? If you’ve ever wanted to use your wireless controller with a computer here’s a way to pull out the RF module and reuse it. The concept is simple enough, there’s a daughter-board in the Xbox 360 which hosts the RF module for wireless controller connectivity. Once you extract it from the carcass of the beast, you just need to find a way to read and push the data to your computer. Any USB enabled microcontroller will do, in this case an Arduino nano was chosen for the task.