Photos from INSIDE Chemtrail Planes Like You’ve NEVER Seen. Gregg Prescott, an author and editor at In5d.com got an intriguing private message from someone on Facebook. 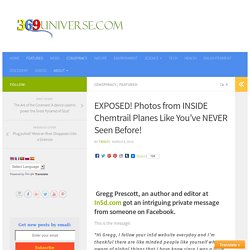 This is the message: “Hi Gregg, I follow your in5d website everyday and I’m thankful there are like minded people like yourself who are aware of global things that I have know since I was a little girl. I came across some photos from a trusted source of the inside of planes that are used for chemtrails and I figured if I passed them on to you, you can help spread more awareness with it on your website. Let me know if this is ok with you. Thanks.” Gregg saw the images and he immediately wanted to know who the source was and if they wanted to elaborate on these photos. “Unfortunately my source does not want to be known and would rather remain anonymous…I’m sure they have some pretty good reasons and I must respect their wishes. Source: in5d.com Please follow and like us: Citizens File $60 Million Suit Against Government Failure to Respond to Chemtrails Questions. 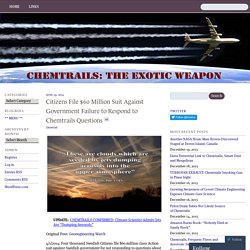 On April 1, 2014, charges were filed against the Swedish government and three of its agencies to the nation’s Chanceller of Justice for widespread and systematic violations of the much heralded “public principle” (“offentlighetsprincipen” similar to FOI). Italians Blow The Lid Off Of The Chemtrail ‘Secret War’ A new Italian film, Chemtrails: The secret war has been released showing a disturbing covert military agenda behind the sinister phenomenon, one that according to evidence presented includes far more than weather manipulation for “climate change.” 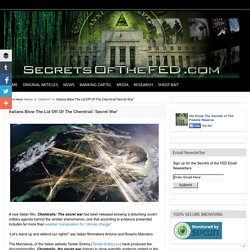 “Let’s stand up and defend our rights!” Say Italian filmmakers Antonio and Rosario Marciano. UN Testimony Of Chemtrails Used To Modify Weather. Worldtruth. A pilot of a commercial airliner made a mistake that PROVES the existence of “CHEMTRAILS” — by forgetting to turn them off before he landed! 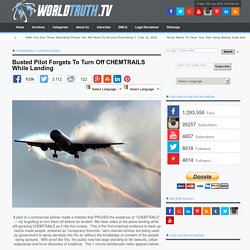 We have video of the plane landing while still spraying CHEMTRAILS as it hits the runway. This is the first empirical evidence to back-up claims made people, smeared as “conspiracy-theorists,” who claimed airlines are being used by government to spray aerosols into the air without the knowledge or consent of the people being sprayed. With proof like this, the public now has legal standing to file lawsuits, utilize subpoenas and force discovery of evidence. The 1 minute blockbuster video appears below. Despite the fact that the plane is landing in foggy weather, the emission of chemtrails is unmistakable; their existence cannot be denied or explained-away by weather. Founder of WorldTruth.Tv and WomansVibe.com Eddie (4827 Posts) Eddie L. is the founder and owner of WorldTruth.TV.

Working the Weather By Laser. We hate to give comfort to all those conspiracy theorists who believe the US government is controlling the world's weather, but progress is finally being made on the old dream of finding a way to make it rain. 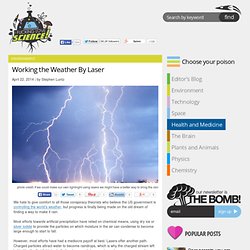 However, most efforts have had a mediocre payoff at best. Lasers offer another path. Charged particles attract water to become raindrops, which is why the charged stream left behind by the first lightning bolt of a storm can bring on rain, and one paper suggests a single lightning stroke can be responsible for around 7000 tonnes of rain. Electrical discharges in the laboratory have been found to cause water droplets to form on the walls of glass chambers. A recent study concluded that laser pulses could break N2 and O2 particles into excited atoms that would then react to form NO and O3.

"What would be nice is to have a sneaky way which allows us to produce an arbitrary long 'filament extension cable.' H.A.A.R.P in Smurfsville Weather Control cartoon FULL Mind Control For Kids. Climate Engineering Weather Warfare, and the Collapse of Civilization. CHEMTRAIL SCIENTIST MURDERED AFTER GOING ON NATIONAL RADIO. Environmental Scientists Eugene Franklin Mallove, Juventina Villa Mojica and Dorothy Stang murdered after releasing lab test results linking chemtrails to the mass death of fish, plant and animal life Comments comments. 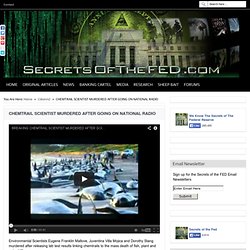 Evergreen Aviation Admits to Chemtrail Contracts with USAF » Evergreen Aviation Admits to Chemtrail Contracts with USAF. ** FLASH ** Earthquake Strikes Crimea; Russian Troops Blame U.S. HAARP - Furious - Saying U.S. "Used a Weapon of Mass Destruction against Russian Military" March 1, 2014 11:43 PM EST -- (TRN) -- A significant earthquake has struck the Crimean peninsula in the Ukraine within the last hour and Russian military sources are claiming it was a deliberate attack by the United States using it's HAARP Array in Alaska, in retaliation for Russia placing troops into the Ukraine. 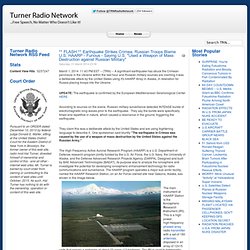 UPDATE: The earthquake is confirmed by the European-Mediterranean Seismological Center HERE According to sources on the scene, Russian military surveillance detected INTENSE bursts of electromagnetic long-waves prior to the earthquake. They say the bursts were specifically timed and repetitive in nature, which caused a resonance in the ground, triggering the earthquake. They claim this was a deliberate attack by the United States and are using frightening language to describe it.