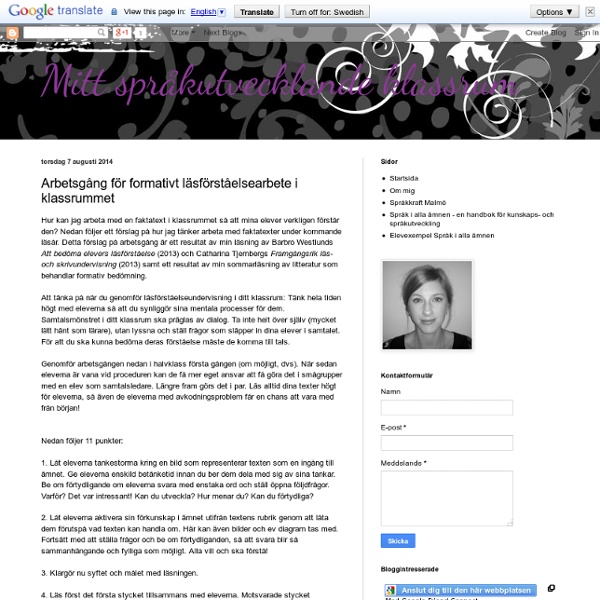 3 Powerful Web Tools to Create Whiteboard Animation Videos for Your Class October 23, 2014 Whiteboard animation videos are videos that draw themselves. They involve an animated use of images, shapes, characters, sounds and voice-overs to create a clip. This form of video production has been very popular recently and is widely used by some leading educational YouTube channels such as TED Ed and RSA Animate. Creating a whiteboard animation video is no longer a graphic designer's job. There are actually several web tools that allow you to easily put together an animated video with as simple tools as drag and drop.

Six Scaffolding Strategies to Use with Your Students What's the opposite of scaffolding a lesson? It would be saying to students something like, "Read this nine-page science article, write a detailed essay on the topic it explores, and turn it in by Wednesday." Yikes -- no safety net, no parachute, no scaffolding -- just left blowing in the wind. Let's start by agreeing that scaffolding a lesson and differentiating instruction are two different things. Scaffolding is breaking up the learning into chunks and then providing a tool, or structure, with each chunk.

Formative Assessments Are Easier Than You Think! When I was teaching science one of the best lessons I learned was about formative assessment. In my first year of teaching I taught the way I was told to teach. Deliver content to my students, assess at the end, remediate if necessary. With that cycle, I always had kids who were behind, who never seemed like they could catch up. Get Muvizu When you download and install Muvizu:Play you are required to accept an End User Licence Agreement (EULA) which concisely outlines the dos and don’ts of the commercial exploitation of footage from Muvizu:Play. But in the interests of plain language, here’s a summary of the rules: Muvizu:Play is a free trial of our software. Muvizu:Play renders animations with a watermark in the bottom left of the image and is limited to SD output. This watermarked footage may be used for educational, non-commercial and personal projects. Muvizu:Play+ is the paid for version of our software and has additional features and capabilities that are missing in the free software.

How stories are told around the world It’s said there isn’t anyone you couldn’t learn to love, once you’ve heard their story. Dave Isay knows that. The ability to honor every human by listening to what they have to say about themselves is central to StoryCorps, the nonprofit he founded in 2003. The premise of StoryCorps is simple: One person interviews another and their conversation is recorded for posterity. 7 Effective Templates For Teacher Feedback Feedback in the classroom is often one-sided: the teacher gives feedback and the student receives it, generally relating to the quality of their work. Depending on the level of the students you teach, you may find yourself subject to student evaluation, but generally that only comes once a semester (at least at the university level), and generally when the course is completed and grades are either done or almost done. When I was a teacher, some of the most useful feedback I got was from my students at the end of the semester.

The Most Important Question Every Assessment Should Answer The Question Every Assessment Should Be Able To Answer by Terry Heick The difference between assessment of learning and assessment for learning is a crucial one, in many ways indicative of an important shift in education. Traditionally, tests have told teachers and parents how a student “does,” then offers a very accessible point of data (usually percentage correct and subsequent letter grade) that is reported to parents as a performance indicator. Class data can be gathered to imply instructional effectiveness, and the data from multiple classrooms can be combined to suggest the performance of an entire school, but a core message here is one of measurement and finality: this is how you did. This was the bar, and you either cleared it or you didn’t.

Google Classroom: List ALL Your Student Files - Teacher Tech While I love Google Classroom, it can be a lot of clicking to locate student files. I created a script that will list all of the files in a Google Classroom class folder. The script lists all of the assignment folders in the class folder, creates a tab for each assignment and lists the files in the assignment folder. This can be used in multiple ways: Quickly find a list of student files submitted.Locate documents a student has submitted.Make notes and record data on files students have submitted.See which students are missing documents.Quickly leave feedback for students on files.Sort and organize student submissions.

51 Of The Most Beautiful Sentences In Literature We asked members of the BuzzFeed Community to tell us about their favorite lines from literature. Here are some of their most beautiful replies. 2. “In our village, folks say God crumbles up the old moon into stars.” —Alexander Solzhenitsyn, One Day in the Life of Ivan Denisovich Suggested by Jasmin B., via Facebook