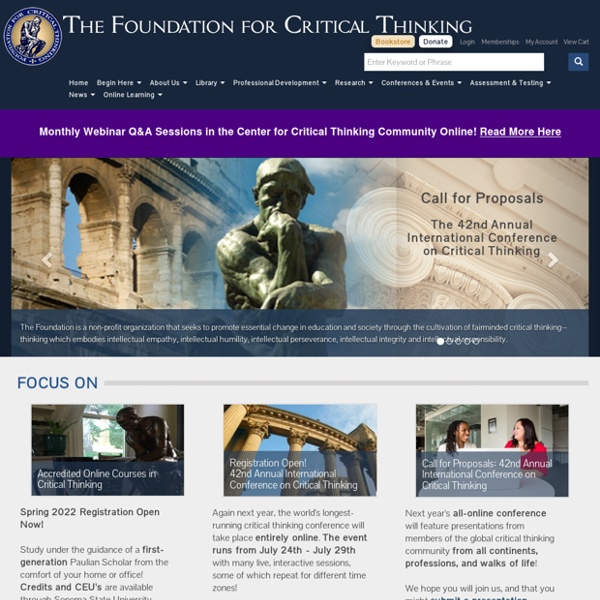 working for essential change in education News and Events Call for Proposals Join our World Conference... We now seek concurrent sessions proposals for the 34th International Conference which advance a substantive conception of fairminded critical thinking in instruction and in any domain of human life. Read More...

The Ethics Centre - Ethics Explainer: Tolerance The yes result of the same-sex marriage survey is in. Now parliament is dealing with the minefield of tolerance: how will it change legislation so it honours family diversity and religious freedoms without discriminating against either? What should be tolerated, accepted and prohibited? This week’s Ethics Explainer should help… For some people, the value of tolerance is simply the opposite of intolerance. But to think of tolerance in simple binary terms limits our understanding of important aspects of the concept.

A Field Guide to Critical Thinking Feature James Lett Skeptical Inquirer Volume 14.2, Winter 1990 There are many reasons for the popularity of paranormal beliefs in the United States today, including: the irresponsibility of the mass media, who exploit the public taste for nonsense,the irrationality of the American world-view, which supports such unsupportable claims as life after death and the efficacy of the polygraph, andthe ineffectiveness of public education, which generally fails to teach students the essential skills of critical thinking.

‘Critical’ Information Literacy The capacity for local conditions and issues to influence the way information literacy is defined and taught, is a concept that has gained significant momentum over the last decade among librarians and educators around the world. This growing realisation has resulted in an increasing body of research produced at the intersection of critical pedagogy and information literacy. From this research, the concept of ‘Critical Information Literacy’ has emerged.

6 Critical Thinking Questions For Any Situation - 6 Critical Thinking Questions For Any Situation by TeachThought Staff While it’s true that critical thinking is a foundation rather than a brick, how you build that foundation depends on the learning process itself: exposing students to new thinking and promoting interaction with that thinking in a gradual release of responsibility approach. The following graphic from learningcommons is most useful for its universal applicability via its simplicity–six basic questions that characterize critical thinking. The questions are general enough that they can be used with almost anything–different age groups, content areas, and various learning contexts. Whether you’re exploring math theories with a high school classroom, astronomical phenomena in a university, or a picture book in the elementary classroom, the questions can be used with few changes to promote critical thinking.

Critical thinking Critical thinking is a type of clear, reasoned thinking. According to Beyer (1995) Critical thinking means making clear, reasoned judgements. While in the process of critical thinking, ideas should be reasoned and well thought out/judged.[1] The National Council for Excellence in Critical Thinking defines critical thinking as the intellectually disciplined process of actively and skillfully conceptualizing, applying, analyzing, synthesizing, and/or evaluating information gathered from, or generated by, observation, experience, reflection, reasoning, or communication, as a guide to belief and action. St. Petersburg College Critical Thinking Gateway Three settings are conducive for critical thinking games: classroom, online, and outdoors (e.g., leadership development activities): Simulations provide realistic or semi-realistic opportunities for students to practice skills and solve problems in safe environments. They differ from structured experiential activities by their multi-part and branching nature. A typical simulation will provide an opening scenario that requires students to engage in a planning activity.

teachthought 25 Of The Best Resources For Teaching Critical Thinking by TeachThought Staff See also 10 Team-Building Games That Promote Critical Thinking Critical thinking On The Web Top Ten Argument Mapping Tutorials. Six online tutorials in argument mapping, a core requirement for advanced critical thinking.The Skeptic's Dictionary - over 400 definitions and essays. The Fallacy Files by Gary Curtis. Best website on fallacies. Butterflies and Wheels. 10 Great Critical Thinking Activities That Engage Your Students How can students own their learning with critical thinking activities they’ll really love? Allowing our students to take stands on issues that matter to them engages the classroom in a way that fosters great critical thinking. Who? What? Why? When? CREATIVITY, CRITICAL THINKING and CONTENT « LJHS Social Studies Blog I divide each Social Studies unit into content and conceptual mastery, analysis and creative interpretation because public education, has three core objectives: 1. To impart a body of knowledge and academic skills deemed valuable by society. 2.

Many, Many Examples Of Essential Questions Many, Many Examples Of Essential Questions by Terry Heick Essential questions are, as Grant Wiggins defined, ‘essential’ in the sense of signaling genuine, important and necessarily-ongoing inquiries.” These are grapple-worthy, substantive questions that not only require wrestling with, but are worth wrestling with–that could lead students to some critical insight in a 40/40/40-rule sense of the term. I collected the following set of questions through the course of creating units of study, most of them from the Greece Central School District in New York. In revisiting them recently, I noticed that quite a few of them were closed/yes or no questions, so I went back and revised some of them, and added a few new ones, something I’ll try to do from time to time.