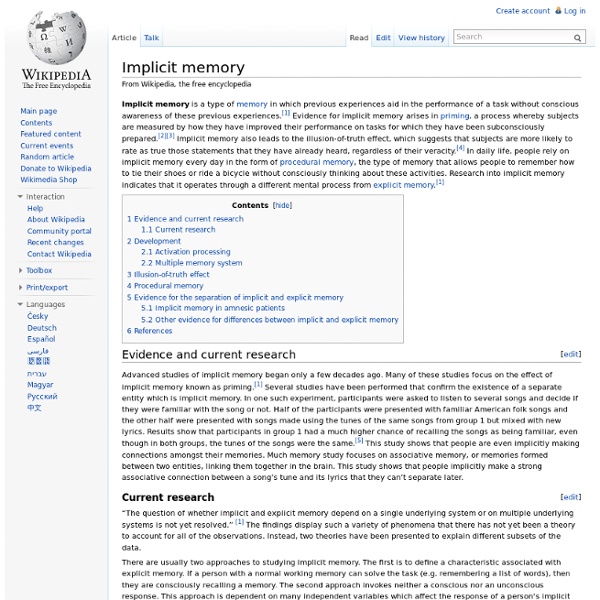 Evidence and current research[edit] Advanced studies of implicit memory began only a few decades ago. Many of these studies focus on the effect of implicit memory known as priming.[1] Several studies have been performed that confirm the existence of a separate entity which is implicit memory. In one such experiment, participants were asked to listen to several songs and decide if they were familiar with the song or not. Half of the participants were presented with familiar American folk songs and the other half were presented with songs made using the tunes of the same songs from group 1 but mixed with new lyrics. Current research[edit] According to Daniel L. There are usually two approaches to studying implicit memory. Development[edit] Empirical evidence suggests infants are only capable of implicit memory because they are unable to intentionally draw knowledge from pre-existing memories. Activation processing[edit] Multiple memory system[edit] Illusion-of-truth effect[edit]

You Are Not So Smart Forer effect A related and more general phenomenon is that of subjective validation.[1] Subjective validation occurs when two unrelated or even random events are perceived to be related because a belief, expectation, or hypothesis demands a relationship. Thus people seek a correspondence between their perception of their personality and the contents of a horoscope. Forer's demonstration[edit] On average, the students rated its accuracy as 4.26 on a scale of 0 (very poor) to 5 (excellent). Only after the ratings were turned in was it revealed that each student had received an identical sketch assembled by Forer from a newsstand astrology book.[2] The sketch contains statements that are vague and general enough to most people. In another study examining the Forer effect, students took the MMPI personality assessment and researchers evaluated their responses. The Forer effect is also known as the "Barnum effect". Repeating the study[edit] Variables influencing the effect[edit] Recent research[edit]

Perception Since the rise of experimental psychology in the 19th Century, psychology's understanding of perception has progressed by combining a variety of techniques.[3] Psychophysics quantitatively describes the relationships between the physical qualities of the sensory input and perception.[5] Sensory neuroscience studies the brain mechanisms underlying perception. Perceptual systems can also be studied computationally, in terms of the information they process. Perceptual issues in philosophy include the extent to which sensory qualities such as sound, smell or color exist in objective reality rather than in the mind of the perceiver.[3] The perceptual systems of the brain enable individuals to see the world around them as stable, even though the sensory information is typically incomplete and rapidly varying. Human and animal brains are structured in a modular way, with different areas processing different kinds of sensory information. Process and terminology[edit] Perception and reality[edit]

Who Are You? (And What do You Think of Me?) The New Hire: What Do I Need to Know About This Job Candidate—and How Can I Find It Out? Every Sunday, America's corporate titans share their hiring strategies with . "I have a very good antenna about people," Starbucks founder Howard Schultz told the "Corner Office" column. "First off, I want to know what you're reading and then I'll ask you why. Abbe Raven, CEO of A&E Television Network, privileges her "gut reaction." The problem with such freewheeling approaches is that qualities like charisma and compassion are faked in job interviews as much as 90 percent of the time, according to one landmark study. People are hugely overconfident about their ability to judge others in general, and recruiters may be particularly so. Potential employees are in impression-management hyperdrive. Huffcutt recommends dispensing with questions that invite tactical or evasive answers: "Tell me about your strengths and weaknesses" or "Why do you want to work here?"

The Science of Why We Don't Believe Science Illustration: Jonathon Rosen "A MAN WITH A CONVICTION is a hard man to change. Tell him you disagree and he turns away. Festinger and several of his colleagues had infiltrated the Seekers, a small Chicago-area cult whose members thought they were communicating with aliens—including one, "Sananda," who they believed was the astral incarnation of Jesus Christ. Through her, the aliens had given the precise date of an Earth-rending cataclysm: December 21, 1954. Festinger and his team were with the cult when the prophecy failed. Read also: the truth about Climategate.At first, the group struggled for an explanation. From that day forward, the Seekers, previously shy of the press and indifferent toward evangelizing, began to proselytize. In the annals of denial, it doesn't get much more extreme than the Seekers. The theory of motivated reasoning builds on a key insight of modern neuroscience (PDF): Reasoning is actually suffused with emotion (or what researchers often call "affect").