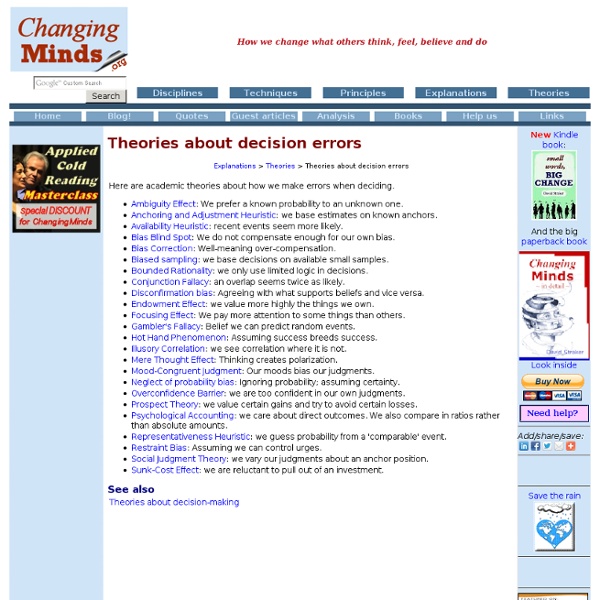 The Illusion of Asymmetric Insight The Misconception: You celebrate diversity and respect others’ points of view. The Truth: You are driven to create and form groups and then believe others are wrong just because they are others. Source: “Lord of the Flies,” 1963, Two Arts Ltd. In 1954, in eastern Oklahoma, two tribes of children nearly killed each other. The neighboring tribes were unaware of each other’s existence. Scientists stood by, watchful, scribbling notes and whispering. These two tribes consisted of 22 boys, ages 11 and 12, whom psychologist Muzafer Sherif brought together at Oklahoma’s Robber’s Cave State Park. He was right, but as those cultures formed and met something sinister presented itself. Sherif and his colleagues pretended to be staff members at the camp so they could record, without interfering, the natural human drive to form tribes. Soon, the two groups began to suspect they weren’t alone. From the study, the boys face each other for the first time Source: “The Breakfast Club,” 1985, Universal

Positive Psychology Exercises for Life Happiness: Psychology Studies to Improve Relationships and Bring Happiness Five easy positive psychology exercises can help you improve your relationship and be happier. Each of these exercises, resulting from psychology studies, offer the benefits of greater happiness, contentment, and life satisfaction. AutonomyExpress your individuality The more autonomy and freedom of choice in your life, the happier you are. Organize your space.Devote some time to activities you enjoy Bad Feelings Fade Positive psychology researcher Dan Gilbert finds that people systematically over-estimate the duration of their feelings about both positive and negative future events. The future isn't as bright as you hope nor as dim as you fear.Adjust your expectations accordingly. Fun and Philanthropy Psychology studies show that an orientation to the welfare of others is, in the long run, more satisfying than an orientation to one's own pleasure. Gratitude Letter Gratitude is a wonderful feeling of thanks that, when expressed, brings positive emotions to both initiator and recipient.

Decision Points Explanations > Decisions > Decision Points Description | Discussion | So what Description Across any single activity or a set of related activities, there may be points at which decisions have to be made. Unless there are clear decision points, people often will continue with the momentum of the current activity. In the design or management of an activity, more or less decision points may be deliberately inserted or omitted. Example A person is given five small bags of popcorn. In retail situations there are clear decision points along the way, such as to stop and look in a window, to enter the shop, to try on clothes and to buy particular things. Business decision-making is more difficult as it often requires a number of people to agree before something is purchased, particularly if it is expensive. Discussion Decisions take time, effort, energy and expense, which together is sometimes called the transaction cost. Psychologically, decisions play to the need for a sense of control. See also

Post Growth Institute The Science of Why We Don't Believe Science Illustration: Jonathon Rosen "A MAN WITH A CONVICTION is a hard man to change. Tell him you disagree and he turns away. Show him facts or figures and he questions your sources. Appeal to logic and he fails to see your point." So wrote the celebrated Stanford University psychologist Leon Festinger (PDF), in a passage that might have been referring to climate change denial—the persistent rejection, on the part of so many Americans today, of what we know about global warming and its human causes. Festinger and several of his colleagues had infiltrated the Seekers, a small Chicago-area cult whose members thought they were communicating with aliens—including one, "Sananda," who they believed was the astral incarnation of Jesus Christ. Through her, the aliens had given the precise date of an Earth-rending cataclysm: December 21, 1954. Festinger and his team were with the cult when the prophecy failed. Read also: the truth about Climategate.At first, the group struggled for an explanation.

Discovering Psychology Highlighting major new developments in the field, this updated edition of Discovering Psychology offers high school and college students, and teachers of psychology at all levels, an overview of historic and current theories of human behavior. Stanford University professor and author Philip Zimbardo narrates as leading researchers, practitioners, and theorists probe the mysteries of the mind and body. Based on extensive investigation and authoritative scholarship, this introductory course in psychology features demonstrations, classic experiments and simulations, current research, documentary footage, and computer animation. This series is also valuable for teachers seeking to review the subject matter. Watch the full documentary now (26 parts, each 25 minutes long) 1. 2. 3. 4. 5. 6. 7. 8. 9. 10. 11. 12. 13. 14. 15. 16. 17. 18. 19. 20. 21. 22. 23. 24. 25. 26.

A list of decision strategies Decision strategies can be considered from two aspects, the big picture and the fine details. The big picture... A strategy is a plan of action or policy which is designed to achieve an overall aim. rational intuitive combinations Rational strategies have to do with identifying options, evaluating and comparing them and eventually deciding on the highest ranking or best option. Intuitive strategies indicate that there may be no rationale or logic behind the choices made. Gary Klein's recognition primed decision model is a combination of the first two. Smaller chunks Let's examine each of the 3 main groups mentioned in finer detail. Decision making is typically considered as the choosing between 2 or more alternatives. How? The big question, of course, is how to choose between many alternatives. David Welch in his book 'Decisions, Decisions' lays out five decision strategies: optimization constrained optimization preselection satisficing and randomization. Pros and cons of each Klein's Model

Abnormaldiversity Ode to Empathy The discussion around empathy seems to be growing exponentially. From the huge splash Brené Brown is making with her work on shame, vulnerability and empathy to Jeremy Rifkin’s vision of our moving towards an Empathic Civilization, empathy is becoming a 21st century buzzword. And rightfully so. With the emergence of a global civilization, we need to move beyond the “us and them” mentality that lends itself to so much conflict, violence, and self-destruction. An absolutely essential ingredient for this is empathy. Changing the Narrative of Human Nature To show just how important this is, let’s take a look at human nature. However, recent research is turning this all-important premise on its head. For instance, if I believe that the world is a place of abundance and opportunities that help me constantly learn and become more empowered, I will live a very different life than if I believed that the world is a scary, dangerous place and I’m helpless to change it.