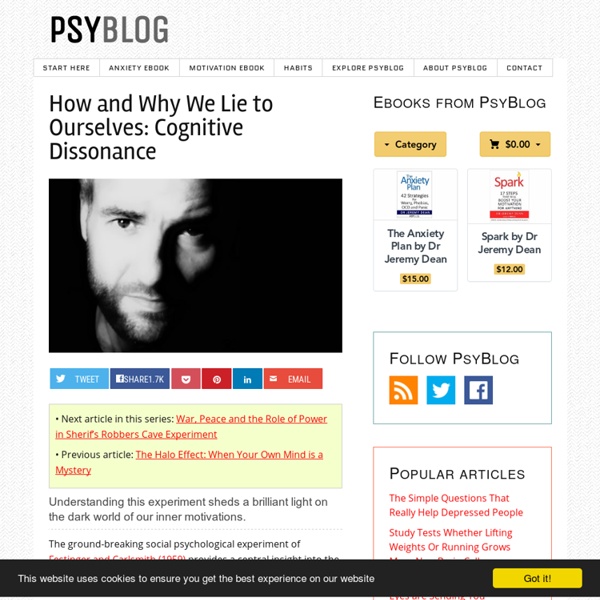 Understanding this experiment sheds a brilliant light on the dark world of our inner motivations. The ground-breaking social psychological experiment of Festinger and Carlsmith (1959) provides a central insight into the stories we tell ourselves about why we think and behave the way we do. The experiment is filled with ingenious deception so the best way to understand it is to imagine you are taking part. So sit back, relax and travel back. The time is 1959 and you are an undergraduate student at Stanford University… As part of your course you agree to take part in an experiment on ‘measures of performance’. Little do you know, the experiment will actually become a classic in social psychology. The set-up Once in the lab you are told the experiment is about how your expectations affect the actual experience of a task. Perhaps you wonder why you’re being told all this, but nevertheless it makes it seem a bit more exciting now that you know some of the mechanics behind the experiment.

Living Healthy for Men: Weight Loss, Fitness Training, & Food Overview A lot can happen between visits to the doctor—especially since more than half of men skip out on their annual physical examinations, according to the American Academy of Family Physicians. “You can feel great, but still have killer numbers,” says Bruce B.

Stanford Prison Experiment The experiment that inspired a novel, two films, countless TV programs, re-enactments and even a band. “The vilest deeds like poison weeds bloom well in prison air” – Oscar Wilde. The best psychological experiments ask timeless questions about human nature, like what makes a person evil? Schema (psychology) In psychology and cognitive science, a schema (plural schemata or schemas) describes an organized pattern of thought or behavior that organizes categories of information and the relationships among them.[1] It can also be described as a mental structure of preconceived ideas, a framework representing some aspect of the world, or a system of organizing and perceiving new information.[2] Schemata influence attention and the absorption of new knowledge: people are more likely to notice things that fit into their schema, while re-interpreting contradictions to the schema as exceptions or distorting them to fit. Schemata have a tendency to remain unchanged, even in the face of contradictory information. Schemata can help in understanding the world and the rapidly changing environment.[3] People can organize new perceptions into schemata quickly as most situations do not require complex thought when using schema, since automatic thought is all that is required.[3] Main article: Schema Therapy

GET.gg Free Downloads - CBT Self Help Leaflets & Booklets Free Downloadable CBT Self-Help Information Leaflets www.STOPP.gg brings you directly to Therapy Worksheets page The following Adobe documents are freely available for you to download for therapy purposes - just click on the picture to open the file (in a new tab/window), then save a copy to your computer. Thumbnail pictures show only top half of portrait format documents. Bystander Effect When the presence of others reduces helping behaviours. The next nomination for the best social psychology study was inspired by the highly publicised murder of Kitty Genovese in 1964 and it is mentioned in every textbook and often dubbed ‘seminal’. The study investigates the ‘bystander effect’. In social psychology this is the surprising finding that the mere presence of other people inhibits our own helping behaviours in an emergency. John Darley and Bibb Latane were inspired to investigate emergency helping behaviours after the murder of Kitty Genovese in 1964. The newspaper report of the murder stated that 38 people had heard and seen the attack, which lasted an hour, yet they did nothing.

This Simple Test Will Blow 98% Of People's Minds. You Other 2%… Well, You're Weird This is a simple test but what happens at the end will probably blow your mind. It happens to be one of those cool things that no one can really explain, but is totally fascinating. It isn't hard science, but you need to try it and see for yourself. Don't write anything down or use a calculator. self help - Google Play This SERIOUS self improvement app contains the ingredient to help one to step forward to life. These are some of the content:- Healthy Abundance Mindset- Meditation- Goal Setting..and many more! Ideal for those who wants to self help themselves! Read below to read some tips since you are already here.

Stanley Milgram: Obedience to Authority Or Just Conformity? What psychological experiment could be so powerful that simply taking part might change your view of yourself and human nature? What experimental procedure could provoke some people to profuse sweating and trembling, leaving 10% extremely upset, while others broke into unexplained hysterical laughter? What finding could be so powerful that it sent many psychologists into frenzied rebuttals? Welcome to the sixth nomination for the top ten psychology studies and as you’ll have guessed it’s a big one. Hold on for controversy though, as this study has come in for considerable criticism with some saying its claims are wildly overblown. Explaining human cruelty