Critical Thinking: Where to Begin 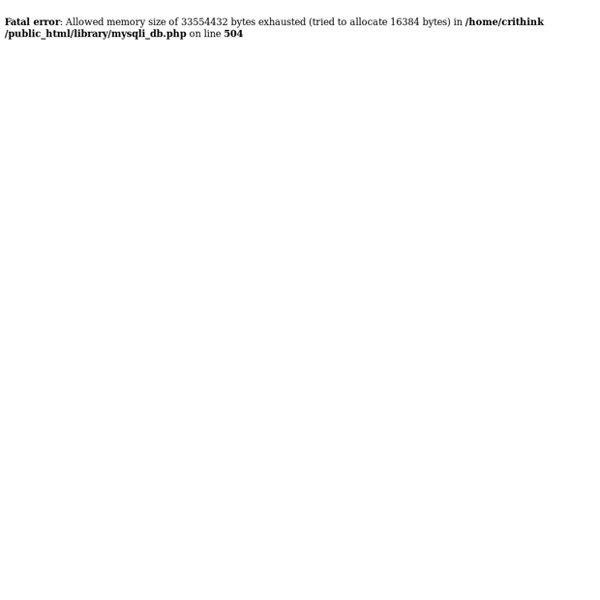 Our Conception of Critical Thinking... There are many ways to articulate the concept of critical thinking, yet every substantive conception must contain certain core elements. Consider these brief conceptualizations of critical thinking... "Critical thinking is the intellectually disciplined process of actively and skillfully conceptualizing, applying, analyzing, synthesizing, and/or evaluating information gathered from, or generated by, observation, experience, reflection, reasoning, or communication, as a guide to belief and action. In its exemplary form, it is based on universal intellectual values that transcend subject matter divisions: clarity, accuracy, precision, consistency, relevance, sound evidence, good reasons, depth, breadth, and fairness..." "Critical thinking is self-guided, self-disciplined thinking which attempts to reason at the highest level of quality in a fairminded way. ~ Linda Elder, September, 2007 Why Critical Thinking? The Problem: A Brief Definition: The Result:

To think critically, you have to be both analytical and motivated In a world where accusations of "fake news" are thrown around essentially at random, critical thinking would seem to be a must. But this is also a world where the Moon landings are viewed as a conspiracy and people voice serious doubts about the Earth's roundness. Critical thinking appears to be in short supply at a time we desperately need it.

The Information Literacy User’s Guide: An Open, Online Textbook Introduction In 2010, a textbook being used in fourth grade classrooms in Virginia became big news for all the wrong reasons. The book, Our Virginia by Joy Masoff, had caught the attention of a parent who was helping her child do her homework, according to an article in The Washington Post. Carol Sheriff was a historian for the College of William and Mary and as she worked with her daughter, she began to notice some glaring historical errors, not the least of which was a passage which described how thousands of African Americans fought for the South during the Civil War. Further investigation into the book revealed that, although the author had written textbooks on a variety of subjects, she was not a trained historian. How did a book with errors like these come to be used as part of the curriculum and who was at fault?

What is Critical Thinking? - Lucid Philosophy Video: What is Critical Thinking? I. Before watching, consider the following 10 definitions of critical thinking: 1) Use of cognitive skills to reach a desirable outcome (Diane Halpern). 2) Judicious reasoning about what to believe and, therefore, what to do (Peg Tittle). 3) The process by which we test claims and arguments and determine which have merit and which do not. The Role of Socratic Questioning in Thinking, Teac One of the reasons that instructors tend to overemphasize “coverage” over “engaged thinking” is that they do not fully appreciate the role of questions in teaching content. Consequently, they assume that answers can be taught separate from questions. Indeed, so buried are questions in established instruction that the fact that all assertions — all statements that this or that is so — are implicit answers to questions is virtually never recognized. For example, the statement that water boils at 100 degrees centigrade is an answer to the question “At what temperature centigrade does water boil?” Hence every declarative statement in the textbook is an answer to a question.

Defining Critical Thinking It entails the examination of those structures or elements of thought implicit in all reasoning: purpose, problem, or question-at-issue; assumptions; concepts; empirical grounding; reasoning leading to conclusions; implications and consequences; objections from alternative viewpoints; and frame of reference. Critical thinking — in being responsive to variable subject matter, issues, and purposes — is incorporated in a family of interwoven modes of thinking, among them: scientific thinking, mathematical thinking, historical thinking, anthropological thinking, economic thinking, moral thinking, and philosophical thinking. Critical thinking can be seen as having two components: 1) a set of information and belief generating and processing skills, and 2) the habit, based on intellectual commitment, of using those skills to guide behavior.

Universal Intellectual Standards by Linda Elder and Richard Paul Universal intellectual standards are standards which must be applied to thinking whenever one is interested in checking the quality of reasoning about a problem, issue, or situation. To think critically entails having command of these standards. To help students learn them, teachers should pose questions which probe student thinking; questions which hold students accountable for their thinking; questions which, through consistent use by the teacher in the classroom, become internalized by students as questions they need to ask themselves.

Types of Reasoning Disciplines > Argument > Types of Reasoning Reasoning within an argument gives the rationale behind why one choice, for example should be selected over another. Types of reasoning include: The Importance of Generalizations in Social Studies Shiveley & Misco (2009) suggest that generalizations are a logical step in teaching kids to think critically about what they know and transferring that knowledge to a variety of topics within the social studies. After understanding the relationship between “fact” and “concept” students will be capable of producing high-quality generalizations that eliminate isolation of ideas and stimulate crossover and relevance to the social studies curriculum. Research Summary