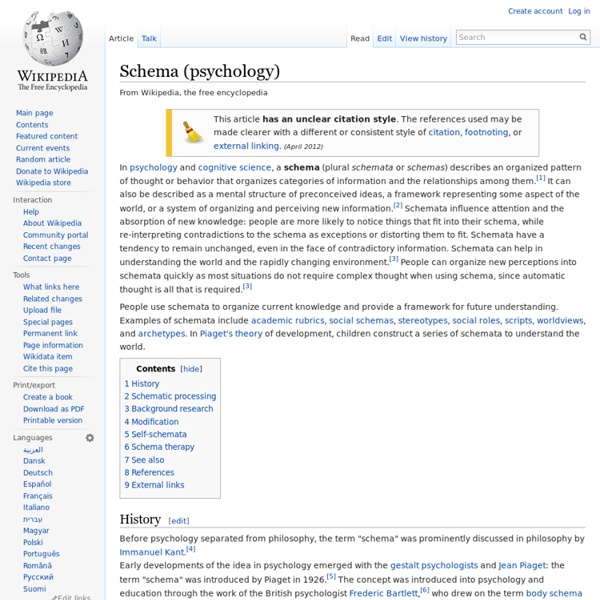 In psychology and cognitive science, a schema (plural schemata or schemas) describes an organized pattern of thought or behavior that organizes categories of information and the relationships among them.[1] It can also be described as a mental structure of preconceived ideas, a framework representing some aspect of the world, or a system of organizing and perceiving new information.[2] Schemata influence attention and the absorption of new knowledge: people are more likely to notice things that fit into their schema, while re-interpreting contradictions to the schema as exceptions or distorting them to fit. Schemata have a tendency to remain unchanged, even in the face of contradictory information. Schemata can help in understanding the world and the rapidly changing environment.[3] People can organize new perceptions into schemata quickly as most situations do not require complex thought when using schema, since automatic thought is all that is required.[3] Main article: Schema Therapy

Cognitive Dissonance Understanding this experiment sheds a brilliant light on the dark world of our inner motivations. The ground-breaking social psychological experiment of Festinger and Carlsmith (1959) provides a central insight into the stories we tell ourselves about why we think and behave the way we do. The experiment is filled with ingenious deception so the best way to understand it is to imagine you are taking part. As part of your course you agree to take part in an experiment on ‘measures of performance’. Little do you know, the experiment will actually become a classic in social psychology. The set-up Once in the lab you are told the experiment is about how your expectations affect the actual experience of a task. Perhaps you wonder why you’re being told all this, but nevertheless it makes it seem a bit more exciting now that you know some of the mechanics behind the experiment. So you settle down to the first task you are given, and quickly realise it is extremely boring. Experimental slip-up

Developing an online print store seems difficult? *Share* MyPrintCloud.com offers print businesses an ecommerce platform which is very easy to use and a business can easily create an e-Store which is highly customizable and can be personalized according to choice. Get started today by visit or email for details at info@myprintcloud.com .

This Simple Test Will Blow 98% Of People's Minds. You Other 2%… Well, You're Weird This is a simple test but what happens at the end will probably blow your mind. It happens to be one of those cool things that no one can really explain, but is totally fascinating. It isn't hard science, but you need to try it and see for yourself. Don't write anything down or use a calculator. This is just simple arithmetic... Are you in the overwhelming percentage that thought “red hammer”? Share your result and test with others and see what your family and friends say! Related: Credits:The Meta Picture, Viral Nova 10 Minute Yoga Routine To De-Stress Yourself Image: Shutterstock Worried that you are putting on weight? And are you too lazy to go to the gym? Sometimes we get so lethargic to exercise that we rather prefer getting obese than sweating out by exercising. But what if there are certain exercises that don’t require a gym at all! And what if they can be performed in just about ten minutes? Want to know more about yoga and the simple ten minute exercises? What Is Yoga? Yoga is an ancient practice which originated in India long before any of us was born. To learn more, keep reading! Benefits Of Yoga: Adding a bit of yoga to your lifestyle can certainly help your body, mind and soul. 1. One of the best benefits you could derive out of yoga is its ability to boost the immunity system. 2. Research conducted in places all over the globe have also shown how less painful migraines can become when yoga is regularly practised.Whether it is the tightening of the neck or a frozen shoulder, migraines can be taken care of with the help of yoga. 3. 4.

Tools for teaching coding to kids » Librarians Matter Every month or so, a few questions niggle me: Should I learn more about how to code (write and modify computer programs) ?Should I be teaching my kids more about coding ?Should I add a little more coding to the course I am teaching? The answers are, I think: DefinitelyYesProbably On the weekend, an article appeared on the “Click” section of the BBCTV site suggesting that the British education system is not creating the programmers needed by the large video game production sector. Hudson, A. (2011, June 4). I would love to see sessions in libraries aimed at teaching kids how to code – especially girls. So – if you want to teach your kids to code, what are some options? 1. 2. 3. 4. Post number 14 for #blogjune 2011 Psychoanalyze Yourself With This Test Psychoanalyze yourself with this fun test. NO CHEATING! That will take all the fun out of it. This will teach you a lot about YOURSELF. Have a pen and paper handy before you read any further. Read the following questions, imagining the scenes in your mind, and write down the FIRST thing that you visualize. 1. 2. 3. 4. 5. 6. 7. 8. 9. 10. This has been a relational psychology test. 1. 2. 3. 4. 5. 6. 7. 8. 9. 10. Share your results in the comments section below. Related: Credits:Psych Forums via Expanded Consciousness

Every Schema Triggers Another Schema Introduction Introduction - Plan for Technology Implementation Montague Area Public Schools "Imagine a party of time travelers from an earlier century, among them one group of surgeons and another of school-teachers, each group eager to see how much things have changed in their profession a hundred or more years into the future. Imagine the bewilderment of the surgeons finding themselves in the operating room of a modern hospital. Although they would know that an operation of some sort was being performed, and might even be able to guess at the target organ, they would in almost all cases be unable to figure out what the surgeon was trying to accomplish or what was the purpose of the many strange devices he and the surgical staff were employing. - Samuel Papert, The Children's Machine The parable above describes for many schools the current scenario of technology in education. Acknowledgements: History of the Technology Committee The technology formed in January 1991, with D.