Model and Metaphor for the 21st Century 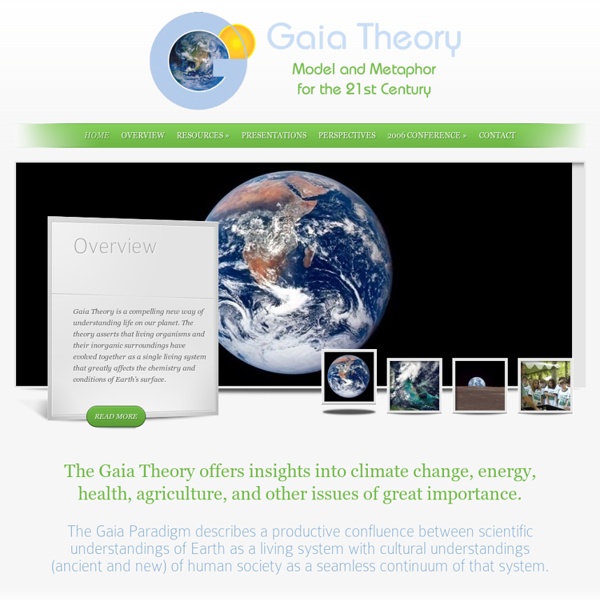 Overview | Gaia Theory The Gaia Paradigm While reading on about the science of Gaia Theory – below and throughout this website – consider the term “Gaia Paradigm.” This phrase refers to the confluence of the best available scientific understanding of Earth as a living system with cultural understandings of human society as a seamless continuum of that system. The “Gaia Paradigm” employs the powerful metaphor of “Gaia” to take the perspective of human beings as part of a living system. What is Gaia Theory? Pick up a newspaper or listen to the news and you’ll quickly see that our understanding of the Earth and our relationship to it has never mattered more. Overall, the Gaia Theory is a compelling new way of understanding life on our planet. Understanding Gaia Theory The Gaia Theory posits that the organic and inorganic components of Planet Earth have evolved together as a single living, self-regulating system. The Gaia theory was developed in the late 1960’s by Dr. Martin Ogle on Gaia Theory

Earth immune system The Earth immune system is a controversial proposal, claimed to be a consequence of the Gaia hypothesis. The Gaia hypothesis holds that the entire earth may be considered a single organism (Gaia). As a self-maintaining organism, Earth would have an immune system of some sort in order to maintain its health. Some proponents of this speculative concept, for example, hold that humankind can be considered an "infection" of Gaia, and that AIDS is an attempt by this immune system to reject the infection. "Cancer" might be a more accurate term, as humans evolved within Gaia, and are not external invaders. James Lovelock's book "The Revenge of Gaia" suggests that Gaia has many mechanisms for eliminating civilizations that do harm through greenhouse gas emissions and global warming, but suggests that with increasing heat being received from the sun, Gaia's ability to "bounce back" as it did after the Permian and Cretaceous extinction events, may be increasingly compromised. See also[edit]

Perfect harmony: The Gaia theory | Science Earth is a perfect planet for life but, according to Gaia theory, this is no coincidence. From the moment life first appeared on Earth it has worked hard to make Earth a more comfortable place to live. Gaia theory suggests that the Earth and its natural cycles can be thought of like a living organism. When one natural cycle starts to go out of kilter other cycles work to bring it back, continually optimising the conditions for life on Earth. Named after the Greek Earth goddess, Gaia, the theory was developed in the 1960s by scientist Dr James Lovelock. Initially, Gaia theory was ignored, and then later ridiculed by scientists such as Richard Dawkins and Stephen J Gould. In its early years Earth's atmosphere was mostly carbon dioxide - the product of multiple volcanic burps. Gaia also helps to explain how the oceans are kept in balance. These processes are not thought to be conscious ones, or to favour any one life form over another.

Geophysiology Geophysiology (Geo, earth + physiology, the study of living bodies) is the study of interaction among living organisms on the Earth operating under the hypothesis that the Earth itself acts as a single living organism. Frederic Clements (1874-1945) of the Carnegie Institute of Washington, who popularized the idea of vegetation climax also introduced the idea of physiology to ecology, considering the interlocking natures of plants and animals as metabolic processes within a single superorganism. The British biologist, Arthur Tansey (1871-1955), who introduced the term ecosystem, also considered the possibility that plant communities could be considered to be boundary-less quasi-organisms, although he never extended his ideas to a planetary scale. G. Eugene Odum believed that homeostasis and stability in ecosystems was a result of evolutionary processes, and Howard Odum (his brother) extended this work to include thermodynamic effects in producing ecological "steady states". See also[edit]

Autopoiesis Systems concept which entails automatic reproduction and maintenance 3D representation of a living cell during the process of mitosis, example of an autopoietic system Overview[edit] In their 1972 book Autopoiesis and Cognition, Chilean biologists Maturana and Varela described how they invented the word autopoiesis.[3]: 89 : 16 "It was in these circumstances ... in which he analyzed Don Quixote's dilemma of whether to follow the path of arms (praxis, action) or the path of letters (poiesis, creation, production), I understood for the first time the power of the word "poiesis" and invented the word that we needed: autopoiesis. They explained that,[3]: 78 They described the "space defined by an autopoietic system" as "self-contained", a space that "cannot be described by using dimensions that define another space. Meaning[edit] Autopoiesis was originally presented as a system description that was said to define and explain the nature of living systems. Relation to complexity[edit]

The Virtual Philosophy Club: The Gaia Hypothesis - Three Levels of Interpretation I posted my first Gaia Topic to this Blog back on Earth Day, April 2010. This new Topic is based on a talk I gave to the Philosophy Club here in The Villages in Central Florida, 11 June 2010. You can download a PowerPointShow of the talk with animated slides and an audio narration Part 1 and Part 2. [Click hyperlink for the Part you want, then click on Open, wait for the file to download, then click on Allow, and crank up the volume for the audio as the slide show starts!] In the 1960's, James Lovelock was tasked by NASA to help find signs of life on Mars. At the suggestion of a neighbor who happened to be a novelist, he changed the name of his theory from the Earth Feedback Hypothesis to the Gaia Hypothesis, after Gaia, the Greek Goddess of Earth. The Gaia Hypothesis may be viewed at three different levels of interpretation, (1) Pure Science, (2) Purpose-Directed Organism, and (3) Grand Unification of Science and Religion. Of course anthills and anteaters do not exist in a vacuum.

W.D. Hamilton, an obituary W D Hamilton is a good candidate for the title of most distinguished Darwinian since Darwin. Other candidates would have to include R A Fisher, whom Hamilton revered as a young student at Cambridge. Hamilton resembled Fisher in his penetrating biological intuition and his ability to render it in mathematics. William Donald Hamilton FRS was Royal Society Research Professor in the Department of Zoology at Oxford, and a Professorial Fellow of New College. Hamilton was showered with medals and honours by the academies and learned societies of the world. For his doctoral work he proposed a difficult mathematical model with a simple conclusion now known as "Hamilton's Rule." The great obsession of his later career was parasites - their evolutionary rather than their medical impact. Hamilton's mathematical models never became arid; they were laced with, and often inspired by, bizarre natural history. Those who loved him saw a Felix with nine lives.

The Evolution of Cooperation 1: Selfish genes and helpful family - Science Brainwaves “I, I, I is the refrain of my whole life, which could be heard in everything I said.” Albert Camus – The Fall This is the first instalment in what will hopefully become a series of blogs (six or so) about the evolution of cooperation. I mentioned before that science is made more interesting by paradoxes. Cooperation is the ultimate paradox of evolution. How does “survival of the fittest” end up with people helping each other? Natural selection favours genes that make more copies of themselves than other genes do. Surprisingly, the Selfish Gene Theory is not particularly about genes being selfish. The purpose of a scientific theory is to explain how the world works. A sibling falls into a river. What if 3 siblings fall into a river? So, kin selection is an explanation for why family members may help each other, even at their own expense.

Gaia hypothesis Paradigm that living organisms interact with their surroundings in a self-regulating system The study of planetary habitability is partly based upon extrapolation from knowledge of the Earth's conditions, as the Earth is the only planet currently known to harbour life (The Blue Marble, 1972 Apollo 17 photograph) The Gaia hypothesis (), also known as the Gaia theory, Gaia paradigm, or the Gaia principle, proposes that living organisms interact with their inorganic surroundings on Earth to form a synergistic and self-regulating, complex system that helps to maintain and perpetuate the conditions for life on the planet. The hypothesis was formulated by the chemist James Lovelock[1] and co-developed by the microbiologist Lynn Margulis in the 1970s.[2] Lovelock named the idea after Gaia, the primordial goddess who personified the Earth in Greek mythology. Overview[edit] The Gaia paradigm was an influence on the deep ecology movement.[11] Details[edit] Rob Rohde's palaeotemperature graphs

The Death of the Tree of Life is Greatly Exaggerated News of the Death of the Tree of Life Has Been Greatly ExaggeratedA Report by Steven Schafersman, Ph.D. Texas Citizens for Science 2009 February 7On 2009 January 22, Texas State Board of Education member Barbara Cargill told the audience in the Travis Building hearing room in Austin that there have been recent "significant challenges" to evolution that rejected Darwin's "Tree of Life." The "Tree of Life" is a metaphor--with an underlying branching or tree-like reality--that Darwin used to represent the common ancestry (or common descent) of all organisms that he hypothesized to exist if his hypothesis of evolution was true. Darwin's tree showed several different branching patterns that Darwin believed represented the different patterns of evolution that he could discern from the living and fossil records. "The affinities of all the beings of the same class have sometimes been represented by a great tree. Darwin's hypothesis of evolution (he termed it a "theory") had several parts.

Carlos Nobre: 2015 is Crucial for the Future Nobel Laureate Carlos Nobre is one of Brazil’s top climate scientists and member of the Brazilian Academy of Science. He is a founding member of WRI Brasil and served until recently on its Board of Directors. Between 2011 – 2015, he served as Secretary for Science Policy and Planning in the Ministry for Science, Technology and Innovation in Brasilia. In May 2015, he is assuming the Presidency of CAPES, a foundation responsible for coordinating training of higher education personnel, under Brazil's Ministry of Education (MEC), but has received special permission to consult part-time for WRI Brasil. Climate change poses a serious threat to sustainable development and poverty reduction. To do this, however, political leaders from around the world must act resolutely this year to guarantee a better future for coming generations and for all other species.