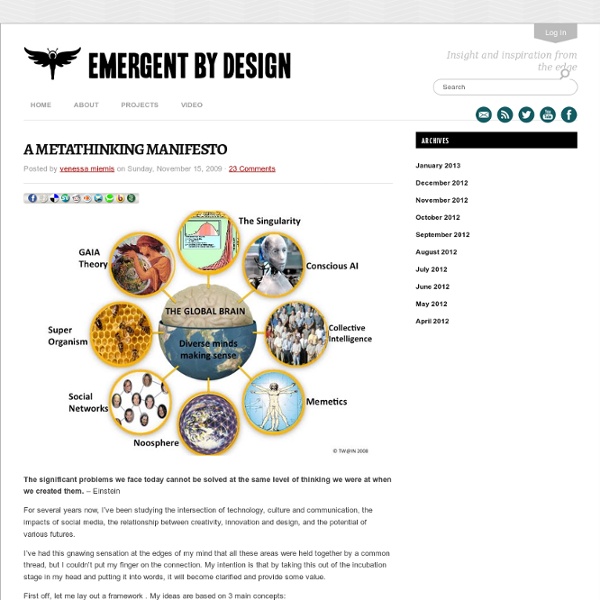 The significant problems we face today cannot be solved at the same level of thinking we were at when we created them. – Einstein For several years now, I’ve been studying the intersection of technology, culture and communication, the impacts of social media, the relationship between creativity, innovation and design, and the potential of various futures. I’ve had this gnawing sensation at the edges of my mind that all these areas were held together by a common thread, but I couldn’t put my finger on the connection. First off, let me lay out a framework . * Social media is fundamentally changing the human experience. * The world is increasing in complexity. * We are experiencing accelerating change. And a brief explanation of each: Social media is fundamentally changing the human experience. We can all agree that social media technologies are here to stay. The businesses are asking: “how do we monetize this?” The educators are asking: “how do we teach this?” So what? Like this: Like Loading... Related:  from metaphor to model...

Anti Design Festival | ADF Manifesto We are living in an age where millions of colours became 256. Difference is the enemy. Generic culture hypnotises us all into generic patterns, where control is visibly invisible. From Learning to Earning, and now to Yearning, we have forgotten why we are here. Revolutionary thought is but a distant memory. This generation was replaced by the Thatcher/Reagan paradigm of Culture=Money. We are now left with a spiritual hollowness. We have managed to create for our children, perhaps for the first time in history, a future which is less hopeful than the one we live in today. Deep Freeze The house of credit cards has now collapsed. We have traded Freedom for Peace. Free Me From Freedom As the Lehman Brothers collapsed, so a new era is signalled and the baton is passed on again. The line of Dangerous Ideas had been interrupted and the path can be found again. Dangerous Ideas

Conceptual Framework for Online Identity Roles I just wrapped up a final project for an aesthetics course this semester, the assignment being to create a “Database of the Self.” I chose to make the database as a representation of the roles we play in terms of how we interact with information online. The roles are overlaid on a panarchy, which shows a visualization of adaptive lifecycles. Though the evolution of every idea or meme won’t necessarily follow this specific path, (it may in fact be rhizomatic, with multiple feedback loops), this begins to flesh out what we become as nodes within an enmeshed series of networks. The cycle can be thought to begin with the “Activators,” in the lower right side of image. For an interactive version of the graphic, click here. I found this to be an interesting exercise when thinking about the impact and influence we have on the web, and how information travels. Thanks to @wildcat2030 for inspiration from Friendships in Hyperconnectivity mindmap and to @gavinkeech for visual design. Like this:

Blended Value NBS: Design Thinking and Business I'm collecting quotes and references here to get an overview of who's saying what about design thinking as applied to business. The idea is still young and in development; it seems we're only now reaching the conversation stage that leads to differing points of view. I welcome suggestions for additions or corrections. —Victor Lombardi, March 2005 Engineering, medicine, business, architecture and painting are concerned not with the necessary but with the contingent - not with how things are but with how they might be - in short, with design. This role of manager as designer is hardly mentioned in the literature, and barely acknowledged in business practice. ...Managers practice "silent design"...the many decisions taken by non-designers who enter directly into the design process, no matter how unaware they or others may be of their impact.— Angela Dumas and Henry Mintzberg, Managing the Form, Function, and Fit of Design, 1991 Today's markets are increasingly unstable and unpredictable.

Good Question! The Eight Best Questions We Got While Raising Ven Editor’s note: Guest writer Glenn Kelman is the CEO of Redfin, an online real estate broker that seeks to give consumers the information and tools once limited to real estate agents. Previously, he was a co-founder of Plumtree Software, which had a public offering in 2002 but is now part of Oracle. Below he shares the best questions from investors during a recent fund raising. For startups, Christmas comes in November. Redfin is one of the companies that just closed a round. VCs are good at asking questions. Here are the questions VCs asked Redfin that changed how we think about our business. 1. 2. Good question. 3. For us, this meant explaining what Redfin made this summer on a single home purchase, with a per-transaction account of what we spent on marketing to get customers ($27), on local data ($153), on customer service ($2,906) and so on. We knew our margin before, but hadn’t broken the numbers down into their most easily handled form. 4. 5. 6. 7. 8. Way.

Conditional Design - Conditional Design Conditional Design A manifesto for artists and designers. Through the influence of the media and technology on our world, our lives are increasingly characterized by speed and constant change. Our work focuses on processes rather than products: things that adapt to their environment, emphasize change and show difference. Instead of operating under the terms of Graphic Design, Interaction Design, Media Art or Sound Design, we want to introduce Conditional Design as a term that refers to our approach rather than our chosen media. The process is the product. The most important aspects of a process are time, relationship and change. The process produces formations rather than forms. We search for unexpected but correlative, emergent patterns. Even though a process has the appearance of objectivity, we realize the fact that it stems from subjective intentions. Logic is our tool. Logic is our method for accentuating the ungraspable. Design conditions using intelligible rules. Use rules as constraints.

to be published in: R. Trappl (ed.) (1996): Cybernetics and Systems '96 (World Science, Singapore?)Francis Heylighen & Johan Bollen Center "Leo Apostel", Free University of Brussels, Pleinlaan 2, B-1050 Brussels Belgium email: fheyligh@vnet3.vub.ac.be, jbollen@vnet3.vub.ac.be Abstract If society is viewed as a super-organism, communication networks play the role of its brain. 1 Introduction It is a recurrent idea that the whole of humanity, the system formed by all people together with their channels of exchange, can be viewed as a single organism: the `super-being' [Turchin, 1977] or `metaman' [Stock, 1993]. Yet, there is at least one domain where integration seems to be moving full speed ahead: the development of ever more powerful communication media. In organisms, the evolution of the nervous system is characterized by a series of metasystem transitions producing subsequent levels of complexity or control [Turchin, 1977; Heylighen, 1995, 1991b]. 2 The Web as an Associative Memory

Transformative Governance 35 Critical Thinking Strategies - Innovatio by Mike Myatt Critical thinking skills are not a luxury for senior executives - they're a survival skill. In today's hi-tech business world we have become reliant on any number of available business tools to help us achieve better results and to perform at higher levels. We attend classes, workshops, webcasts, conferences etc., and we read books on how to master everything from the newest software application to the latest management theory. Most professionals intellectually understand that learning is a life-long endeavor, but the reality is that many executives and entrepreneurs invest very little in the development of the human mind once they have finished their formal education. Developing sound critical thinking skills are a requirement for CEOs and entrepreneurs. Paul, Binker, Jensen, and Kreklau (1990) developed a list of 35 dimensions of critical thought. Affective Strategies

Wiki tools - CPsquare From [[ CPsquare]], the community of practice on communities of practice. Definition / description of a Wiki A Wiki is a special kind of web server that allows its users to freely create and edit Web page content using a Web browser. Wikis support an internal hyperlink system allowing pages to easily be linked together. This allows users to both change content on a page and the overall structure of interlinked pages. Wikis can be set up so that anyone in the world can edit a page or so that only specific people are permitted to read or edit a page (login required and/or password protected). Wikis for Communities of Practice Wikis are very flexible in that users can both add, change content, add new pages, and change the connections between them. Wikis are designed to de-emphasize individual authorship, allowing any user to edit any text. Finally, because of a reduced emphasis on individual authorship, wikis may also change a group's experience of themselves. Video intro

The Global Brain, the Semantic Web, the Singularity and 360-2020 consciousness to create the Web of WE: socially-voiced co-creation - un knol de 刘Twain Video Introduction F irstly, thank you for your interest and I hope readers will contribute their own considered analysis and gut intuitions here intelligently, regardless of whether or not they agree with these postulations and the presentation of them. Secondly, I’m looking forward to our interactions and building upon this model together. Thirdly, I have the flu whilst I write this so my own brain may not be optimally functioning! Nevertheless, I promised a knowledge share and here it is. This post is an initiating conversation in a continuum of “negotiations of intellect” (discourse) I’m engaging in with others interested in the subject matter, as well as within myself. It is not intended to be the definitive, static or absolute end-game version, nor indeed the academic / geek version. I decided to start this posting today, 26 November, on my father's birthday. It’s for this myriad of interconnected reasons I’m interested in the Global Brain: personal, parental and professional.

Bridging The Gap Is the growing gap between the Financial Director and the Finance department creating a gulf between strategic objectives and operational deliverables? Financial Director’s Vision The growing realisation of the strategic importance of IT to an organisation is reflected in the Financial Director’s role in specifying new financial software. Integration with other systems, proactive report generation and the use of alerts all form part of the overall vision to transform the business. As FDs increasingly appreciate, there are huge opportunities for reducing cost and improving efficiency through automation. However, why are these corporate objectives rarely achieved in full? There is a growing belief that the problem lies, in part, in the developing gulf between the system specifiers and those tasked with overseeing the actual implementation, particularly in larger organisations. Accountants’ reality Indeed, the problem is not just one of communicating the strategic vision. Business implication