IntelliConnect Log In. 'The exclusive right to their writing... By: Ginsburg, Jane C, (Columbia University School of Law) Comments that the recent coincidence of new technology and new legislation in the US has enhanced the ability of US copyright owners to wield electronic protective measures to control the exploitation of their works. 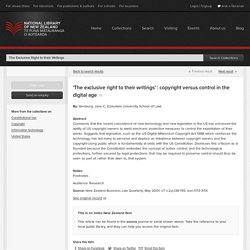 Suggests that legislation, such as the US Digital Millennium Copyright Act 1988 which reinforces the technology, has led many to perceive and deplore an imbalance between copyright owners and the copyright-using public which is fundamentally at odds with the US Constitution. Dismisses this criticism as ill founded because the Constitution embodies the concept of author control, and the technological protections, further secured by legal protections, that may be required to preserve control should thus be seen as part of, rather than alien to, that system. Footnotes Audience: Research. Copyright (New Technologies) Amendment Act 2008 No 27 (as at 16 September 2011), Public Act.

“(1) A person ( ) commits an offence who, in the course of business, makes, imports, sells, distributes, lets for hire, offers or exposes for sale or hire, or advertises for sale or hire, a TPM circumvention device that applies to a technological protection measure if A knows that it will, or is likely to, be used to infringe copyright in a TPM work. “(2) A person ( 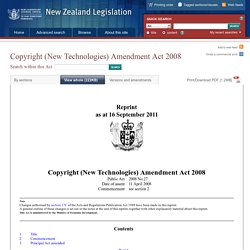 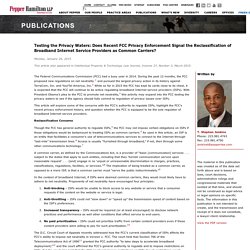 During the past 12 months, the FCC proposed new regulations on net neutrality 1 and pursued the largest privacy action in its history against TerraCom, Inc. and YourTel America, Inc.2 While so far in 2015 the FCC has kept its cards close to its chest, it is expected that the FCC will continue to be active regulating broadband Internet service providers (ISPs). With President Obama’s plea to the FCC to promote net neutrality,3 this activity may expand into the FCC testing the privacy waters to see if the agency should fully commit to regulation of privacy issues over ISPs.

This article will explore some of the concerns with the FCC’s authority to regulate ISPs, highlight the FCC’s recent privacy enforcement history, and question whether the FCC is equipped to be the sole regulator of broadband Internet service providers. Reclassification Concerns The D.C. New Zealand: Licensing and intellectual property. Many foreign firms operate in New Zealand by licensing their technology and know-how, mainly because they consider the market too small for direct investment. 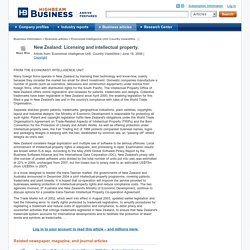 Domestic companies manufacture a number of goods (such as cosmetics, televisions and construction equipment) under licence from foreign firms, often with distribution rights for the South Pacific. The Intellectual Property Office of New Zealand offers online registration and renewals for patents, trademarks and designs. Collective trademarks have been registrable in New Zealand since April 2000; the enabling legislation for this filled a gap in New Zealand's law and in the country's compliance with rules of the World Trade Organisation. "Impact of Legal Threats on Online Music Sharing Activity: An Analysis " by Sudip Bhattacharjee, Ram D. Gopal et al. Abstract The music industry has repeatedly expressed concerns over potentially devastating impacts of online music sharing. 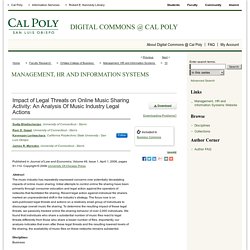 Initial attempts to control online file sharing have been primarily through consumer education and legal action against the operators of networks that facilitated file sharing.