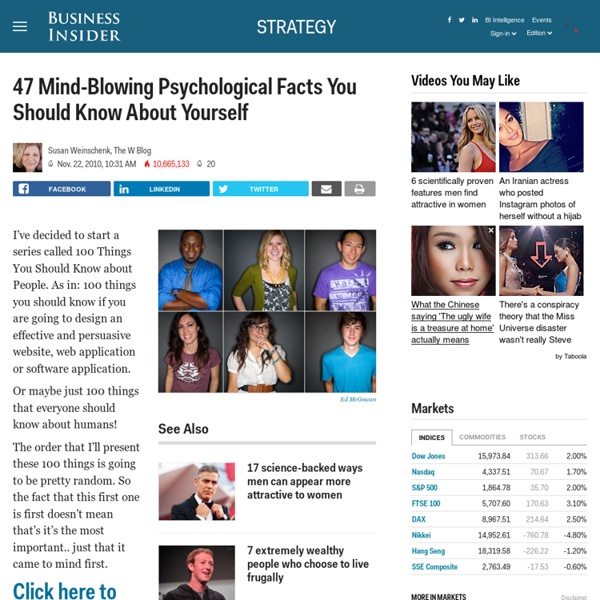 I’ve decided to start a series called 100 Things You Should Know about People. As in: 100 things you should know if you are going to design an effective and persuasive website, web application or software application. Or maybe just 100 things that everyone should know about humans! The order that I’ll present these 100 things is going to be pretty random. So the fact that this first one is first doesn’t mean that’s it’s the most important.. just that it came to mind first. Dr. <div class="slide-intro-bottom"><a href=" class="sl-start"> &raquo;</a></div>

16 Children And Their Bedrooms From Across The World. This Truly Opened My Eyes... Some children grow up in poverty, lacking food and sanitation, while others are born in countries where basic necessities are taken for granted. Photographer James Mollison came up with the project when he thought about his own childhood bedroom and how it reflected who he was. Where Children Sleep – a collection of stories about children from around the world told through portraits of their bedrooms - stemmed from his ideas. I'm shocked by how differently children start their lives in this world. All of them deserve a chance, but some will never get one due to the harsh environments they're raised in.

Kiss Your Keyboard and Mouse Goodbye With The Leap Since Steven Spielberg expertly crafted it a decade ago, the world has been clamoring for a user interface similar to what was found in sci-fi thriller Minority Report. Even the inkling of flipping through applications and swiping screens in mid-air made geeks tingle all over, but aside from expertly developed hacks on the Xbox Kinect, nothing definitive seemed to break through and truly give the public that enticing functionality of the future. That is, until now. Architects of Control, Program One – Mass Control & The Future of Mankind “The real war is the war on consciousness. It’s very important to always remember that …Mind control is ubiquitous. It’s almost a question of who is not mind controlled, as opposed to who is mind controlled. It’s just a difference in degree. The whole question of what is consciousness and how it can be manipulated is one of the most crucial questions of our time.”

Do not stand at my grave and weep Do Not Stand at My Grave and Weep is a poem written in 1932 by Mary Elizabeth Frye. Although the origin of the poem was disputed until later in her life, Mary Frye's authorship was confirmed in 1998 after research by Abigail Van Buren, a newspaper columnist.[1] Full text[edit] Do not stand at my grave and weep, I am not there; I do not sleep. Dissecting the empathic brain: An interview with Christian Keysers Why do we shudder when we watch a tarantula crawling across James Bond’s chest in a 007 movie? And what can looking into a monkey’s brain tell us about our capacity to share in the emotional experiences of other people? Answers to these questions appear in The Empathic Brain: How the Discovery of Mirror Neurons Changes our Understanding of Human Nature, the fascinating and entertaining new book by Christian Keysers, Professor for the Social Brain at the University Groningen in the Netherlands. Keysers, one of the world’s most distinguished and innovative neuroscientists, was part of the famous team at the University of Parma, Italy, that discovered auditory mirror neurons in the macaque monkey, which has revolutionised thinking about how empathy works in human beings. In this exclusive interview for Outrospection, I talk to him about his book, and how far neuroscience has really taken us in our understanding of empathy. We all know this, and take it for granted.

10 Incredible Cutting-Edge Technologies In Development Technology Don’t give up on flying cars or hoverboards just yet! As technology marches relentlessly on, everything goes into development sooner or later—as demonstrated by the existence of these things, which we’ll almost certainly see within our lifetimes. 10 Artificial Gills Inventors have long sought an underwater breathing apparatus that doesn’t store oxygen, but extracts it from the water the way gills do. Israeli inventor Alon Bodner has come close.

Humans Have a Lot More Than Five Senses Today I found out humans have a lot more than five senses. It turns out, there are at least nine senses and most researchers think there are more like twenty-one or so. Just for reference, the commonly held definition of a “sense” is “any system that consists of a group of sensory cell types that respond to a specific physical phenomenon and that corresponds to a particular group of regions within the brain where the signals are received and interpreted.” The commonly held human senses are as follows: Sight: This technically is two senses given the two distinct types of receptors present, one for color (cones) and one for brightness (rods).Taste: This is sometimes argued to be five senses by itself due to the differing types of taste receptors (sweet, salty, sour, bitter, and umami), but generally is just referred to as one sense. For those who don’t know, umami receptors detect the amino acid glutamate, which is a taste generally found in meat and some artificial flavoring.

What Everyone Should Know About Their Own Minds Classic psychology studies show just how little access we have to the workings of our own minds. Ever wondered where your opinions come from, how you manage to be creative, or how you solve problems? Well, don’t bother. Psychology studies examining these areas and more have found that while we’re good at inventing plausible explanations, these explanations are frequently completely made-up.

8 Things to Stop Doing Right Now The main purpose of this site is to help you be who you want to be and live the life you want to live. I think everyone deserves that at the bare minimum, and I believe that everyone can achieve it. Therefore, a lot of the messages that I share here are positive, inspiring and action orientated. With this post I want to change direction, and not cover the things you should be doing, but the things you shouldn't be doing. I'm not even going to be half-hearted about it and say you should 'probably' stop doing these things or 'you can if you want'.

Einstein On Creative Thinking: Music and the Intuitive Art of Scientific Imagination "The greatest scientists are artists as well," said Albert Einstein (Calaprice, 2000, 245). As one of the greatest physicists of all time and a fine amateur pianist and violinist, he ought to have known! So what did Einstein mean and what does it tell us about the nature of creative thinking and how we should stimulate it? In our last post, we suggested that community singing might be a simple way to introduce creativity into one's life. In the post before that Einstein's musical hobbies served as an example of personal creativity providing the kind of recreation that enables professional innovation. Cosplay of the Day Most Upvoted 1229 votes This Couple Had Their Priest Sing at Their Wedding, But They Weren't Expecting Him to Belt Out Such an Awesome Cover of 'Hallelujah' 1042 votes We Weren't All Born to Give High Fives 625 votes

Upside-down glasses If you just want to get yourself a pair of perspective flipping goggles, all you have to do is download the file, arrange the parts to be cut (being sure to include two earpieces, they're identical, you know) and laser cut yourself a pair (mirror side down on the plastic, please.) It's pretty simple. What those of you without laser cutters (poor souls that you are) may take away is this cool construction method I learned from puzzle maker Lee Krasnow. I measured my screws, nuts, and washers, and modeled them simply in cad.