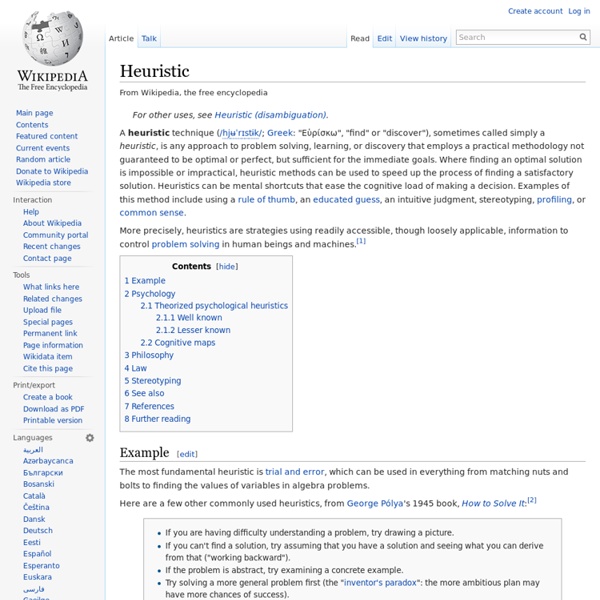 A heuristic technique (/hjʉˈrɪstɨk/; Greek: "Εὑρίσκω", "find" or "discover"), sometimes called simply a heuristic, is any approach to problem solving, learning, or discovery that employs a practical methodology not guaranteed to be optimal or perfect, but sufficient for the immediate goals. Where finding an optimal solution is impossible or impractical, heuristic methods can be used to speed up the process of finding a satisfactory solution. Heuristics can be mental shortcuts that ease the cognitive load of making a decision. Examples of this method include using a rule of thumb, an educated guess, an intuitive judgment, stereotyping, profiling, or common sense. More precisely, heuristics are strategies using readily accessible, though loosely applicable, information to control problem solving in human beings and machines.[1] Example[edit] Here are a few other commonly used heuristics, from George Pólya's 1945 book, How to Solve It:[2] Psychology[edit] Well known[edit] Lesser known[edit] Related:  Extra Pounds□

10 Heuristics for User Interface Design Visibility of system status The system should always keep users informed about what is going on, through appropriate feedback within reasonable time. (Read full article on visibility of system status.) Match between system and the real world The system should speak the users' language, with words, phrases and concepts familiar to the user, rather than system-oriented terms. (Read full article on the match between the system and the real world.) User control and freedom Users often choose system functions by mistake and will need a clearly marked "emergency exit" to leave the unwanted state without having to go through an extended dialogue. Consistency and standards Users should not have to wonder whether different words, situations, or actions mean the same thing. Error prevention Even better than good error messages is a careful design which prevents a problem from occurring in the first place. (Read full article on preventing user errors.) Recognition rather than recall Help and documentation

how to be creative Accept that you’ve got the creative urge and it’s never going to go away. Make friends with it. Drink some tequila if you need to. Commit to the process. Engage! There is a gap between where you are and where you want to be. You eat the elephant one mouthful at a time. Creativity happens in the relationship between you and your medium, whether it’s the violin or writing or painting or puppetry or interpretive dance or start-ups or some combination thereof (interpretive dance puppetry, which I hear is wildly underrated). Find your tribe. Avoid toxic people. Seek constructive feedback. Master your tools. Master the difficult. Celebrate your progress, step by step by step. Embrace your limitations and constraints. If you don’t have any limitations, make some up. Develop creative rituals. Control your space. Be imperfect. Reframe failure. Go for bold heroic failures. Be solitary. Be social. Feed your head. Create conversation. Go where the conversation isn’t. Shift perspectives.

Metaheuristic Compared to optimization algorithms and iterative methods, metaheuristics do not guarantee that a globally optimal solution can be found on some class of problems. Many metaheuristics implement some form of stochastic optimization, so that the solution found is dependent on the set of random variables generated.[1] By searching over a large set of feasible solutions, metaheuristics can often find good solutions with less computational effort than can algorithms, iterative methods, or simple heuristics. As such, they are useful approaches for optimization problems.[1] Several books and survey papers have been published on the subject.[1][3][4] Properties and classification[edit] Different classifications of metaheuristics. These are properties that characterize most metaheuristics: There are a wide variety of metaheuristics[1] and a number of properties along which to classify them. One approach is to characterize the type of search strategy. Applications[edit] Contributions[edit]

Seeks Seeks is a websearch proxy and collaborative distributed tool for websearch. Content Seeks code provides: a web proxy,a websearch meta search engine that aggregates results and ranks them based on consensus.a plugin system and a set of default plugins, including websearch and ad blocking plugins.a P2P collaborative filter that enables decentralized collaborative searching and sharing. Installation Dependencies: libcurllibxml2libpcretokyo cabinetprotocol bufferslibevent (optional, 2.x preferred)opencv (optional)docbook2x-man (optionnal) From the root directory, run . Compilation options can be listed with . Running Seeks This is an early version of Seeks, it is recommended your run it from the repository you compiled it from. cd src . see . For example, by default seeks does not run as a daemon. Other important options can be modified in the configuration file, src/config By default, seeks runs as proxy on the local machine (127.0.0.1) on port 8250. Troubleshooting

Heuristic Evaluation July 6, 2014 Showing users things they can recognize improves usability over needing to recall items from scratch because the extra context helps users retrieve information from memory. January 1, 1997 Discount usability engineering is our only hope. June 27, 1995 Participants in a course on usability inspection methods were surveyed 7-8 months after the course. January 1, 1995 Heuristic evaluation is a good method of identifying both major and minor problems with an interface, but the lists of usability problems found by heuristic evaluation will tend to be dominated by minor problems, which is one reason severity ratings form a useful supplement to the method. Rating usability problems according to their severity facilitates the allocation of resources to fix the most serious problems. Usability inspection is the generic name for a set of methods that are all based on having evaluators inspect a user interface. Jakob Nielsen's 10 general principles for interaction design.

Top of the Web Follow Springo on : Find top sites My top sites Top Sites News Music Video Sports Online Games Shopping Maps Photos Movies Select your setting: Shoe Lacing Methods Mathematics tells us that there are more than 2 Trillion ways of feeding a lace through the six pairs of eyelets on an average shoe. This section presents a fairly extensive selection of 50 shoe lacing tutorials. They include traditional and alternative lacing methods that are either widely used, have a particular feature or benefit, or that I just like the look of. 50 Different Ways To Lace Shoes Criss Cross Lacing This is probably the most common method of lacing normal shoes & boots. Over Under Lacing This method reduces friction, making the lacing easier to tighten and loosen plus reducing wear and tear. Gap Lacing This simple variation of Criss Cross Lacing skips a crossover to create a gap in the middle of the lacing, either to bypass a sensitive area on the instep or to increase ankle flexibility. Straight European Lacing This traditional method of Straight Lacing appears to be more common in Europe. Straight Bar Lacing Hiking / Biking Lacing Quick Tight Lacing Ukrainian Lacing- New!

Heuristics Tinnitus Masker - sonic designs by Jon Dattorro for relief of ringing ears - mp3 downloads (download sound sounds tinnitus maskers Tinnitus Masking treatment help ear help hearing sound therapy) Masking Tinnitus iTunes iPod Mask Tinnitus Masker Tinnitus H On this page you will find soothing sounds to help you cope with ringing in the ears, called . When the cochlea is damaged, the brain perceives a signal at the frequency corresponding to a damaged cilium. Click on the ear above to see a movie about the cochlea (with sound, created by the people at Howard Hughes Medical Institute). Here is a wonderful video by 1997 Nobel laureate Steven Chu filmed at University of California Berkeley who hypothesizes ringing as oscillation of nonlinear Hopf oscillators comprising the cochlea. If you have normal hearing, these sounds will help you sleep, think, study, meditate, read, or concentrate. These sounds are designed to play on your computer or your portable MP3 player. Boeing 747 in flight - inside, front cabin, 60 minutes. jet-60-mid.mp3 (28MByte) Boeing 747 in flight - inside, rear cabin, 60 minutes. jet-60-low.mp3 (28MByte) USS Enterprise NCC-1701-D, 60 minutes.

Weird Encyclopedia - a Quick & Dirty Guide to All Things Strange SMART HEURISTICS What interests me is the question of how humans learn to live with uncertainty. Before the scientific revolution determinism was a strong ideal. Religion brought about a denial of uncertainty, and many people knew that their kin or their race was exactly the one that God had favored. They also thought they were entitled to get rid of competing ideas and the people that propagated them. How does a society change from this condition into one in which we understand that there is this fundamental uncertainty? How do we avoid the illusion of certainty to produce the understanding that everything, whether it be a medical test or deciding on the best cure for a particular kind of cancer, has a fundamental element of uncertainty? Introduction "Isn’t more information always better?" Gigerenzer provides an alternative to the view of the mind as a cognitive optimizer, and also to its mirror image, the mind as a cognitive miser. Gerd Gigernezer 's Edge Bio Page