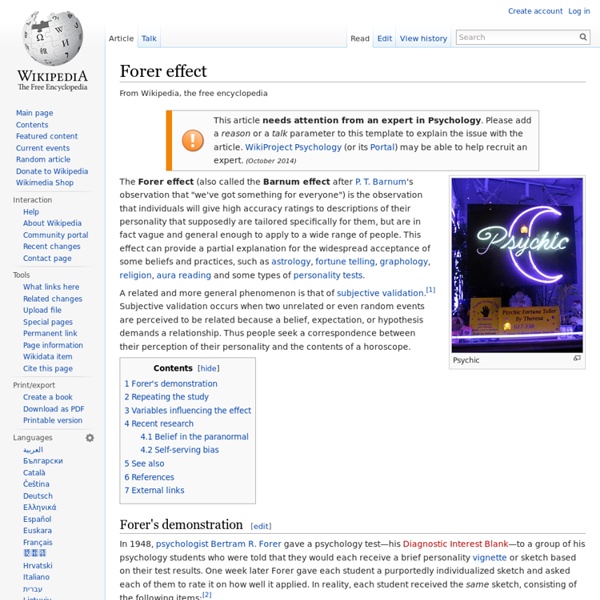 A related and more general phenomenon is that of subjective validation.[1] Subjective validation occurs when two unrelated or even random events are perceived to be related because a belief, expectation, or hypothesis demands a relationship. Thus people seek a correspondence between their perception of their personality and the contents of a horoscope. Forer's demonstration[edit] On average, the students rated its accuracy as 4.26 on a scale of 0 (very poor) to 5 (excellent). Only after the ratings were turned in was it revealed that each student had received an identical sketch assembled by Forer from a newsstand astrology book.[2] The sketch contains statements that are vague and general enough to most people. In another study examining the Forer effect, students took the MMPI personality assessment and researchers evaluated their responses. The Forer effect is also known as the "Barnum effect". Repeating the study[edit] Variables influencing the effect[edit] Recent research[edit]

Kohlberg's Moral Stages W.C. Crain. (1985). Theories of Development. Prentice-Hall. pp. 118-136. An outstanding example of research in the Piagetian tradition is the work of Lawrence Kohlberg. Kohlberg has focused on moral development and has proposed a stage theory of moral thinking which goes well beyond Piaget's initial formulations. Kohlberg, who was born in 1927, grew up in Bronxville, New York, and attended the Andover Academy in Massachusetts, a private high school for bright and usually wealthy students. Kohlberg is an informal, unassuming man who also is a true scholar; he has thought long and deeply about a wide range of issues in both psychology and philosophy and has done much to help others appreciate the wisdom of many of the "old psychologists," such as Rousseau, John Dewey, and James Mark Baldwin. Piaget studied many aspects of moral judgment, but most of his findings fit into a two-stage theory. At approximately the same time--10 or 11 years--children's moral thinking undergoes other shifts.

Who Are You? (And What do You Think of Me?) The New Hire: What Do I Need to Know About This Job Candidate—and How Can I Find It Out? Every Sunday, America's corporate titans share their hiring strategies with . "I have a very good antenna about people," Starbucks founder Howard Schultz told the "Corner Office" column. Abbe Raven, CEO of A&E Television Network, privileges her "gut reaction." The problem with such freewheeling approaches is that qualities like charisma and compassion are faked in job interviews as much as 90 percent of the time, according to one landmark study. People are hugely overconfident about their ability to judge others in general, and recruiters may be particularly so. Potential employees are in impression-management hyperdrive. Huffcutt recommends dispensing with questions that invite tactical or evasive answers: "Tell me about your strengths and weaknesses" or "Why do you want to work here?" Interviewers are drawn to open-ended inquiries because they think they'll zero in on personality.

Curious case of free speech in Bangladesh | Opinion One after another curiosity-arousing stories on Bangladesh’s current state of free-speech kept on coming in the recent months. There was news where we learnt about editors of websites and newspapers being summoned by authorities. Talk show hosts were asked to explain their conversations with guests. And very recently, a young Jahangir Nagar University lecturer named Ruhul Khandakar got serious punishment for his Facebook status. Some of the above news may make people from other parts of the world shiver. For us, the reaction is much more muted, since our country’s record of protecting free speech is not that stellar. It deserves mention that I absolutely have full faith and respect for the Bangladeshi government agencies, authorities, and of course, on the country’s judiciary. I did read what that young lecturer of Jahangir Nagar University wrote in his Facebook status while in Australia on an educational leave. There was another recent news item that appeared quite bizarre to me.

Top 10 Common Faults In Human Thought Humans The human mind is a wonderful thing. Cognition, the act or process of thinking, enables us to process vast amounts of information quickly. The Gambler’s fallacy is the tendency to think that future probabilities are altered by past events, when in reality, they are not. Reactivity is the tendency of people to act or appear differently when they know that they are being observed. Pareidolia is when random images or sounds are perceived as significant. Interesting Fact: the Rorschach Inkblot test was developed to use pareidolia to tap into people’s mental states. Self-fulfilling Prophecy Self-fulfilling prophecy is engaging in behaviors that obtain results that confirm existing attitudes. Interesting Fact: Economic Recessions are self-fulfilling prophecies. The Halo effect is the tendency for an individual’s positive or negative trait to “spill over” to other areas of their personality in others’ perceptions of them. Escalation of Commitment

The Top 10 Psychology Studies of 2010 The end of 2010 fast approaches, and I'm thrilled to have been asked by the editors of Psychology Today to write about the Top 10 psychology studies of the year. I've focused on studies that I personally feel stand out, not only as examples of great science, but even more importantly, as examples of how the science of psychology can improve our lives. Each study has a clear "take home" message, offering the reader an insight or a simple strategy they can use to reach their goals , strengthen their relationships, make better decisions, or become happier. 1) How to Break Bad Habits If you are trying to stop smoking , swearing, or chewing your nails, you have probably tried the strategy of distracting yourself - taking your mind off whatever it is you are trying not to do - to break the habit. That's because habit-behaviors happen automatically - often, without our awareness. J. 2) How to Make Everything Seem Easier J. 3) How To Manage Your Time Better M. 4) How to Be Happier J.

Madonna–whore complex In sexual politics the view of women as either Madonnas or whores limits women's sexual expression, offering two mutually exclusive ways to construct a sexual identity.[4] The term is also used popularly, often with subtly different meanings. Causes[edit] Freud argued that the Madonna–whore complex is caused by oedipal castration fears which arise when a man experiences the affection he once felt for his mother with women he now sexually desires. In order to manage this anxiety, the man categorizes women into two groups: women he can admire and women he finds sexually attractive. Whereas the man loves women in the former category, he despises and devalues the latter group.[5] Psychoanalyst Richard Tuch suggests that Freud offered at least one alternative explanation for the Madonna–whore complex: According to Freudian psychology, this complex often develops when the sufferer is raised by a cold and distant mother. In popular culture[edit] See also[edit] References[edit] Notes Literature John A.