5 Logical Fallacies That Make You Wrong More Than You Think 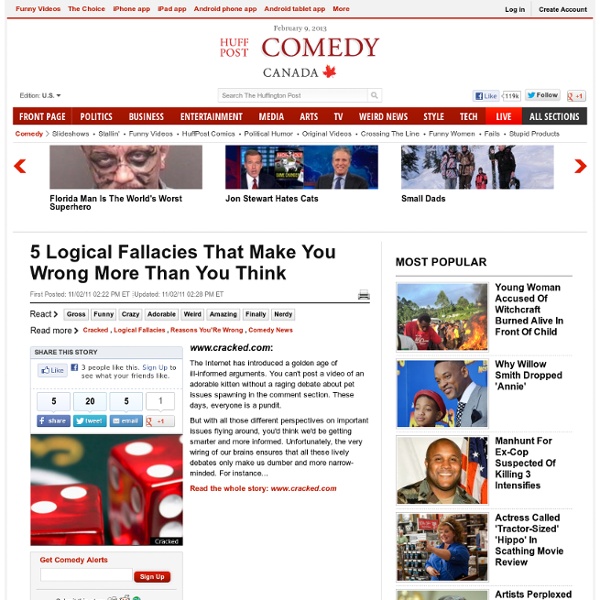 Art Markman, Ph.D.: The Smartest Way to Overcome an Obstacle Few important things in life come easy. Starting in school, there are days where assignments just don't go well. That concept you thought you had nailed in class has flown from your mind by the time you sit down to do your work. As you get older, the obstacles get more varied. You might want to buy a great new car, but you don't have the money. Dealing with obstacles is a crucial part of being successful in life. Sometimes, of course, we just push through the obstacles. When you're faced with a new obstacle, though, this kind of automatic reminding won't work. To get the intuition behind this, consider a simple experiment from this paper. Of course, this result isn't that surprising. Experiencing an obstacle also affected conceptual processing. This conceptual study also allowed the authors to demonstrate an important quality of this increase in thinking globally following an obstacle. What does this mean for you? Your motivation system wants to help you achieve your goals.

The Last Mystery of the Financial Crisis What about the ratings agencies? That's what "they" always say about the financial crisis and the teeming rat's nest of corruption it left behind. Everybody else got plenty of blame: the greed-fattened banks, the sleeping regulators, the unscrupulous mortgage hucksters like spray-tanned Countrywide ex-CEO Angelo Mozilo. But what about the ratings agencies? Man, are they ever. Thanks to a mountain of evidence gathered for a pair of major lawsuits by the San Diego-based law firm Robbins Geller Rudman & Dowd, documents that for the most part have never been seen by the general public, we now know that the nation's two top ratings companies, Moody's and S&P, have for many years been shameless tools for the banks, willing to give just about anything a high rating in exchange for cash. [Read more from Rolling Stone: Everything Is Rigged: The Biggest Price-Fixing Scandal Ever] Ratings agencies are the glue that ostensibly holds the entire financial industry together.

10 Practical Uses For Psychological Research in Everyday Life People love to give each other advice. The web is full to bursting with all types of pseudo-psychological advice about life. The problem is, how much of this is based on real scientific evidence? Well, here on PsyBlog we’ve got the scientific evidence. So here’s my top 10 list of what you can learn practically from the psychological research discussed here recently. 1. 2. 3. 4. 5. 6. 7. 8. 9. 10.

List of cognitive biases Cognitive biases are tendencies to think in certain ways that can lead to systematic deviations from a standard of rationality or good judgment, and are often studied in psychology and behavioral economics. There are also controversies over some of these biases as to whether they count as useless or irrational, or whether they result in useful attitudes or behavior. For example, when getting to know others, people tend to ask leading questions which seem biased towards confirming their assumptions about the person. However, this kind of confirmation bias has also been argued to be an example of social skill: a way to establish a connection with the other person.[7] Although this research overwhelmingly involves human subjects, some findings that demonstrate bias have been found in non-human animals as well. For example, hyperbolic discounting has been observed in rats, pigeons, and monkeys.[8] Decision-making, belief, and behavioral biases[edit] Social biases[edit] Debiasing[edit]

How to Get Out of a Slump Edit Article Edited by SantaPaws, Teresa, Spyagent, Nicole Willson and 9 others It can happen to any one of us on occasion––doing well in life can suddenly seem to come to a screeching halt, to be replaced by doubts, frustration and a sense of the blues even. When you're in a slump, be it your career, your sports game, your studies or your personal life, it's not pleasant. In fact, it can be confusing and hard to feel motivated to do anything more than feel stuck. However, your general feeling of malaise and dissatisfaction is telling you something pointed––it's time to reroute your direction and start finding a new pathway to a brighter future for yourself. Most of a journey to pick yourself up and out of a slump is going to be a very personal and internally guided one (provided that you trust your own voice). Ad Steps 1Relax. 12Reward yourself when you reach milestones in your goal. Tips Stay focused on the end result when you feel as if the slump is lasting for ages. Warnings

Why Borders Disfigure Landscapes as Well as Thoughts | Politics on GOOD In 1989, as a first-year university student, I photographed the fall of the Berlin Wall in my hometown. It became the very symbol for the downfall of the USSR as a superpower and the end of a world order that had shaped our planet and lives for almost half a century. It was the most exciting and positive political event I’ve witnessed—a first-hand experience of history in the making which deeply moved me. During that time, many people believed that this would be the end of walls as a political instrument and we'd put them on the garbage heap of history as an anachronistic tool. Israel | Occupied Palestinian Territories The Iron Curtain | former German - German border A barrier is the proof of human weakness and error, and the inability of human beings to communicate with each other. Ceuta and Melilla, Spain | Morocco Baghdad Cyprus | Greenline South-Korea | North-Korea USA | Mexico Globalization promised us an ending, a dissolution of borders.

Leap Year Project: A Prototype for Radically Experiential Learning | Education on GOOD Can young people create their own education? If so, how should they do it? For me, the roots of the question lie in the fact that I've always been hopeful. At a young age hope seemed sparse after my family life deteriorated due to a divorce and subsequent challenges. During my senior year of high school, I brought my Middle Eastern parents into the same room to share that I wouldn't be pursuing the expected route of becoming a doctor. I also began working for a student program at a church in the west suburbs of Chicago. My work made me curious about further education in business, design, and simply learning how I could make a difference. I began interviewing hundreds of friends, family, peers, college students, and professors, asking droves of questions about learning methods, practices, ideas, and personal dreams. When I explained I was thinking of creating my own education, people were partly intrigued and perplexed. So, can we create a new type of education?