A Boy And His Atom: The World's Smallest Movie 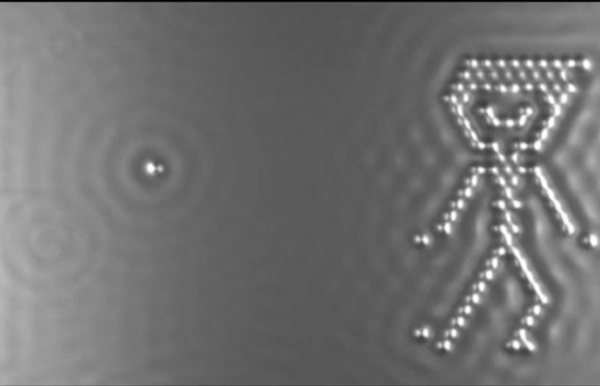 Pioneer 10 Pioneer 10 (originally designated Pioneer F) is an American space probe, weighing 258 kilograms, that completed the first mission to the planet Jupiter.[1] Thereafter, Pioneer 10 became the first spacecraft to achieve escape velocity from the Solar System. This space exploration project was conducted by the NASA Ames Research Center in California, and the space probe was manufactured by TRW. Pioneer 10 was assembled around a hexagonal bus with a 2.74 meter diameter parabolic dish high-gain antenna, and the spacecraft was spin stabilized around the axis of the antenna. Its electric power was supplied by four radioisotope thermoelectric generators that provided a combined 155 watts at launch. A Boy And His Atom An atom is the smallest division of a chemical element. In fact, to even see one you have to magnify it over 100 million times. That's small. So small that there are probably more atoms in one grain of sand than there are grains of sand on an entire beach. What’s more, there are about 5 million atoms in the period at the end of this sentence. Learn how atoms form molecules

Einstein for Everyone Einstein for Everyone Nullarbor Press 2007revisions 2008, 2010, 2011, 2012, 2013 Copyright 2007, 2008, 2010, 2011, 2012, 2013 John D. Norton Published by Nullarbor Press, 500 Fifth Avenue, Pittsburgh, Pennsylvania 15260 with offices in Liberty Ave., Pittsburgh, Pennsylvania, 15222 All Rights Reserved John D. Dowsing for bombs: Maker of useless bomb detectors convicted of fraud. Photo by Sabah Arar/AFP/Getty Images Sometimes, the good guys win. In 2009, it came to light that a man named James McCormick was selling a device he claimed could detect hidden bombs. Clearly, something like this would have great military utility. The thing is, the detectors McCormick made didn’t work.

Exclusive: The first pictures of blood from a 10,000 year old Siberian woolly mammoth First ever sample of mammoth's blood was discovered by Siberian researches. Picture: Semyon Grigoriev Scientists say they have found both blood and muscle tissue - perfectly preserved in the ice - from a Siberian mammoth. The blood had dripped out of the giant animal into a natural ice capsule and it represents a dream discovery for researchers. Scientists Discover a Jewel at the Heart of Quantum Physics Physicists reported this week the discovery of a jewel-like geometric object that dramatically simplifies calculations of particle interactions and challenges the notion that space and time are fundamental components of reality. “This is completely new and very much simpler than anything that has been done before,” said Andrew Hodges, a mathematical physicist at Oxford University who has been following the work. The revelation that particle interactions, the most basic events in nature, may be consequences of geometry significantly advances a decades-long effort to reformulate quantum field theory, the body of laws describing elementary particles and their interactions. Interactions that were previously calculated with mathematical formulas thousands of terms long can now be described by computing the volume of the corresponding jewel-like “amplituhedron,” which yields an equivalent one-term expression.