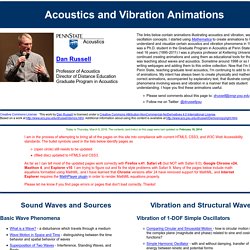 The contents (and links) on this page were last updated on February 18, 2014. I am in the process of attempting to bring all of the pages on this site into compliance with current HTML5, CSS3, and W3C Web Accessibility standards. The bullet symbols used in the lists below identify pages as (open circle) still needs to be updated (filled disc) updated to HTML5 and CSS3. As far as I can tell most of the updated pages work correctly with Firefox v.41, Safari v8 (but NOT with Safari 9.0), Google Chrome v24, Maxthon 4, and Explorer v10. Please let me know if you find page errors or pages that don't load correctly. The Physics Careers Resource. News - Science of the Olympic Winter Games 2014.

Science and engineering of the Olympic Winter Games 2014 The National Science Foundation has partnered with NBC Learn (the educational arm of NBC News) to release the "Science and Engineering of the 2014 Olympic Winter Games"--the latest installment in the Emmy Award-winning "Science of Sports" series. This enlightening 10-part video collection, narrated by NBC Sports' Liam McHugh, delves into the physics, engineering, chemistry, design and mathematics behind the world's foremost sporting event. The segments feature a variety of sports stories, as told by some of the world's top athletes and record holders, along with perspectives and innovative research from leading NSF-supported engineers and scientists. The series' diverse topics reveal how key engineering and science concepts and cutting-edge technology play an integral part in each athlete's respective sport and help maximize their performance at the 2014 Sochi Games. 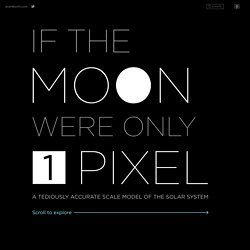 Circular Motion. Video. LinReg for physics class data graphing « Physics! Blog! What is LinReg and how can I get it? 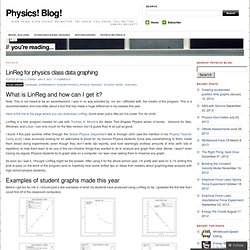 Note: This is not meant to be an advertisement. I was in no way solicited by, nor am I affiliated with, the creator of the program. This is a recommendation and love letter about a tool that has made a huge difference in my classes this year. Here is the link to the page where you can download LinReg. Scroll down just a little bit; it is under “For All Units”. LinReg is a free program created for use with Thomas A. I found it this past summer either through the Global Physics Department talk or through John (see the mention in his Physics Teacher Camp post). As soon as I saw it, I thought LinReg might be the answer. Examples of student graphs made this year Before I get too far into it, I should post a few examples of what my students have produced using LinReg so far.

AP Physics. Light and Optics. Electricity. Next Time Questions. Most of these have been published over the years as Figuring Physics in The Physics Teacher magazine. 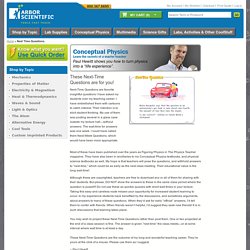 They have also been in ancillaries to my Conceptual Physics textbooks, and physical science textbooks as well. My hope is that teachers will pose the questions, and withhold answers to “next time,” which could be as early as the next class meeting. Their educational value is the long wait time! Although these are copyrighted, teachers are free to download any or all of them for sharing with their students. But please, DO NOT show the answers to these in the same class period where the question is posed!!! You may wish to project these Next-Time Questions rather than post them. These Next-Time Questions are the outcome of my long and wonderful teaching career.